Designed in 1892 by American architect A. Page Brown in the Beaux Arts style, the Ferry Building was fully completed in 1898. At its opening, it was the largest project undertaken in the city. The clock tower is designed after the 12th-century Giralda bell tower in Seville, Spain, and the entire length of the building on both frontages is based on an arched arcade. Since the 1950s and the introduction of bridges across the bay, the use of ferries declined and in 2002 the whole complex was restored and renovated. The ferry terminal is a designated San Francisco landmark and is listed on the National Register of Historic Places.

The Ferry Building after the Quake of 1906. 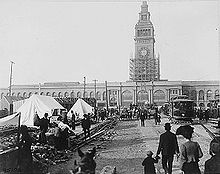 The building originally opened in 1898, replacing its wooden predecessor. The structure was so well-built that it survived both the 1906 and the 1989 earthquakes with little damage. Until the completion of the Bay Bridge and Golden Gate Bridge in the 1930s, the Ferry Building was the second busiest transit terminal in the world, second only to London's Charing Cross Station.

After the bridges were constructed, ferry use declined instantly and the building began to deteriorate. It wasn't until March 2003 that the building reopened after an extensive four-year restoration. The Ferry Building Marketplace -- a world class public food market -- is organized along a dramatic indoor street, the Nave. Today, ferry terminals operate at Larkspur, Sausalito, Vallejo, and Alameda with plans for continuing network improvements and expansion.