Located at 250 Douglass Street, the Alfred E. Clarke Mansion, also known as Caselli Mansion, Nobby Clarke's Castle and Nobby Clarke's Folly, is one of the many historical houses of San Francisco. It managed to survive the 1906 San Francisco earthquake and subsequent fires which had destroyed many of the other Victorian mansions. It became a San Francisco Landmark on December 7, 1975.Today the building is used as a rental property, with 15 apartments.

The house under construction in the 1870s. 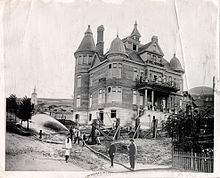 Modern shot of the house from the front. 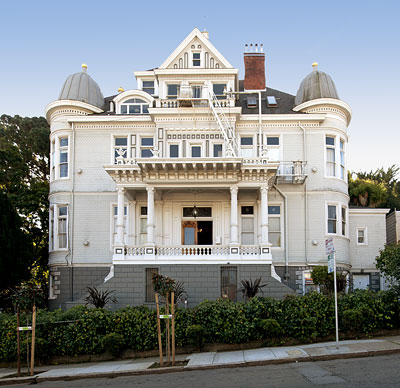 Built in 1892, the Alfred Clarke Mansion was originally owned by "Nobby" Clarke, an Irish sailor boy who came to San Francisco aboard the American ship Commonwealth in 1850. He initially tried his luck in the gold mines but soon returned to the city, where there was more money to be made as a stevedore.
In 1856 he joined the police force and by 1887, when he resigned from his position as clerk to the Chief of Police, he is said to have saved some $200,000. He bought seventeen acres at the head of Eureka Valley, and built the mansion known at the time as "Clarke's Folly." The four-story cost around $100,000 to build in 1892. The architectural style reflects the frequently eclectic fashion of the day, but may most briefly be described as Baroque-Queen Anne.
By 1904 the building was the California General Hospital, and at a later date it was a rooming house for Standard Oil Company employees; today, it is an apartment house.