Built in 1874, the Miller-Joost house is the oldest house on Twin Peaks. With its Italianate influences, the house was named after two German immigrants, Behrend Joost and Adam Miller whose daughter married Joost in 1874. The construction date is unknown, but the oldest part of the house may have been built as early as 1867 when Twin Peaks was only farmland. As late as 1900, the area remained sparsely populated.

A shot of Joost House from the front. 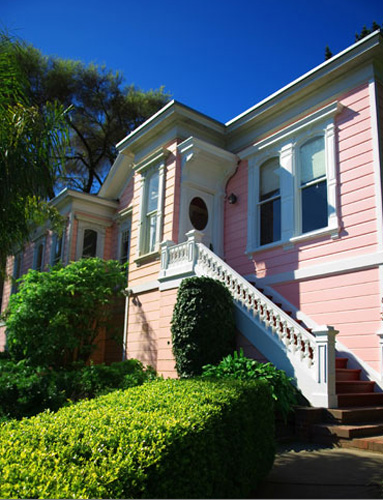 Inside one of the rooms of the house. 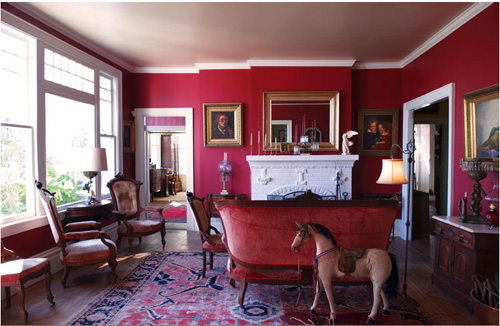 Joost was a successful San Francisco businessman and was responsible for constructing the first San Francisco electric street railway. He also founded a water company to distribute water from Twin Peaks to his neighborhood. He also invested in real estate and helped build neighborhoods of Noe Valley, Bay View, Clarendon Heights, and Sunnyside.

But Behrend Joost was not born into wealth. A farm boy from Germany, he and his four brothers came to San Francisco to find their fortune. At the age of 15, Behrend booked passage to America where two of his brothers already lived. Fabian was a goldminer in California when Behrend arrived in April Of 1857. Tonjes, the oldest brother, had a grocery store and Behrend became a salesman in his store. Within two years, he had saved $1000 and a few days before Christmas, 1859, Behrend opened his own grocery store at 11th Street and Mission, a busy toll road.

From here he expanded his business and opened up stores around the city. In 1887, Behrend decided to switch his retail merchandise from groceries to hardware. He became involved in the California Dredging Company during the early stages of building the Panama Canal. After over a year of work, Behrend pulled out with a profit of $850,000. He used that fortune to refocus his career in real estate and railroad building in San Francisco.