The Kays House was the home of Victor C Kays (1882-1966), the first president of what is now Arkansas State University. He served as president of the institution from 1910 till 1943. In 1936, President Kay’s hired Little Rock Architect, A.N. McAninch to design a house near the campus. McAninch designed the house in the Tudor style, which was popular with the Wilson Family, a large landowner and supporter of the institution. The house served as the home of the Kay’s family until 2001 when the university acquired it and much of the land around it. The initial plan was to demolish the house, but the university community rallied and saved it. It was rehabilitated and the house now serves as offices and a museum.

The Victor Kays House was the home of Arkansas State University's first president, Victor C. Kays, who served in this for for 33 years. 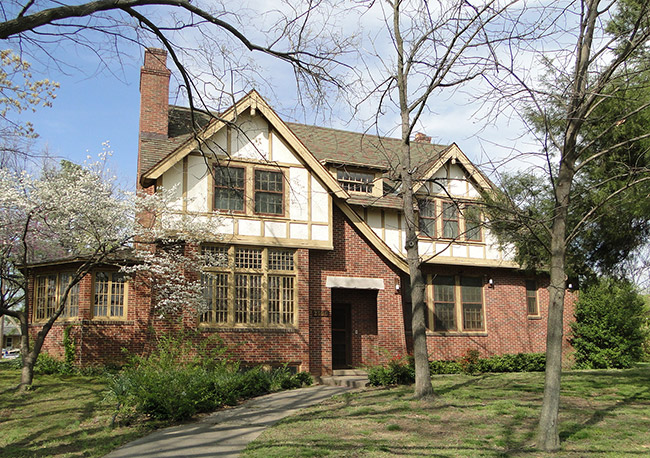 Victor Cicero Kays was born on July 24, 1882 in Magnolia, Illinois. One of six children, he grew up on a farm and completed high school in the town of Henry, Illinois. He graduated from Northern Illinois State College in 1902 with a bachelor's degree and then enrolled at the University of Illinois, where he earned a bachelor of science degree in 1906. After teaching for a time at a high school in Savanna, Illinois, he attended New Mexico A&M College and graduated in 1909 with a bachelor's and master's degree in agriculture.

Kays got a job as an experiment station lab chemist in Mesilla Park, New Mexico before becoming director of an agricultural school in Wetumpka, Alabama. It was there that he met an Arkansas state senator who recruited Hays to become the president of the First District State Agricultural School (now Arkansas State University) in Jonesboro. Kays' first day as president was June 1, 1910 and the school opened on October 3rd. Kays served as president until 1943 and then became president emeritus and business manager (he also served as acting president for almost year beginning in 1945 after his successor resigned). During his tenure, Kays led the effort to convert the school into a four-year university and oversaw the expansion of the campus.

Kays and his wife lived in the house during Kay's tenure as president and his retirement. He died in 1966 and his wife passed away in 1976. Their son, Victor Hale Kays, returned to Jonesboro to live at the house after his mother died. Shortly after he died in 2001, the university bought the house and used it as faculty housing until 2011 when maintenance costs became too high. For many years, the university planned to demolish it to make way for sorority houses but faculty and preservation activists organized to stop this plan. Renovations began in 2014 and were completed in 2017.