Dedicated by the Native Sons and Daughters of Kansas City in 1957, this marker commemorates Camp Union, a small fort built by U.S. troops at this location in 1861. It consisted of barracks and service buildings surrounded by a 200 square foot earthwork. Various companies of the U.S. Reserve Corps were stationed here to protect Kansas City from Confederate attacks beginning in June 1861. Troops would remain here for the duration of the war.

The marker was dedicated by the Native Sons and Daughters of Kansas City in 1987. 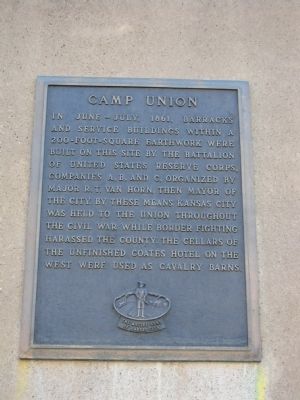 The marker is attached to the building on the left. 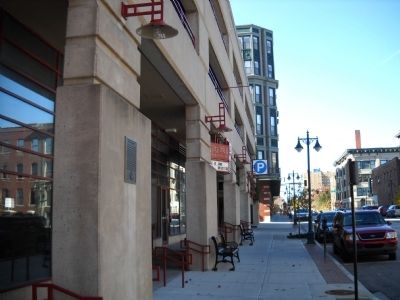 Drawing of Camp Union made near the end of the war in 1865. Image courtesy of the Missouri Valley Special Collections of the Kansas City Public Library. 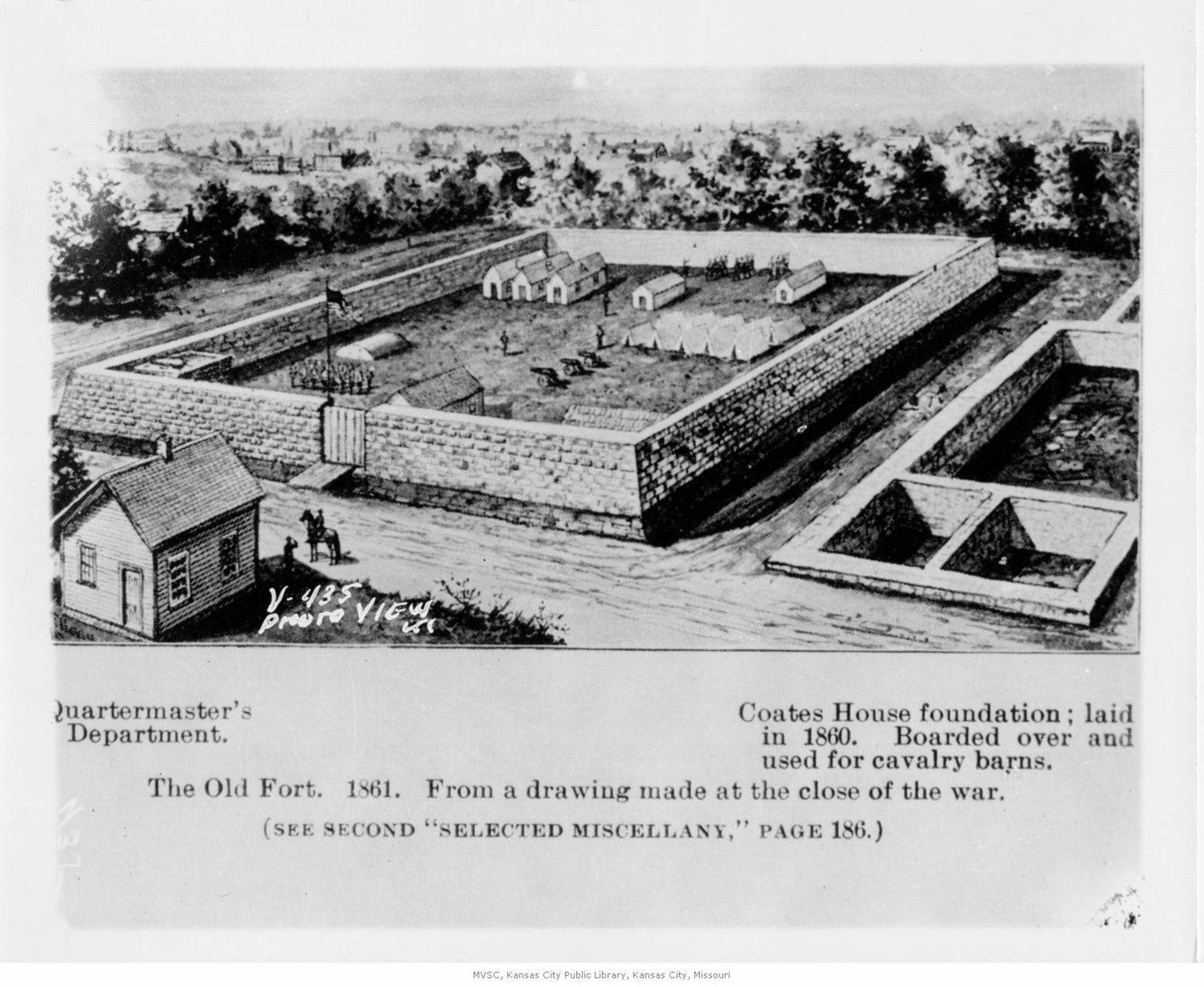 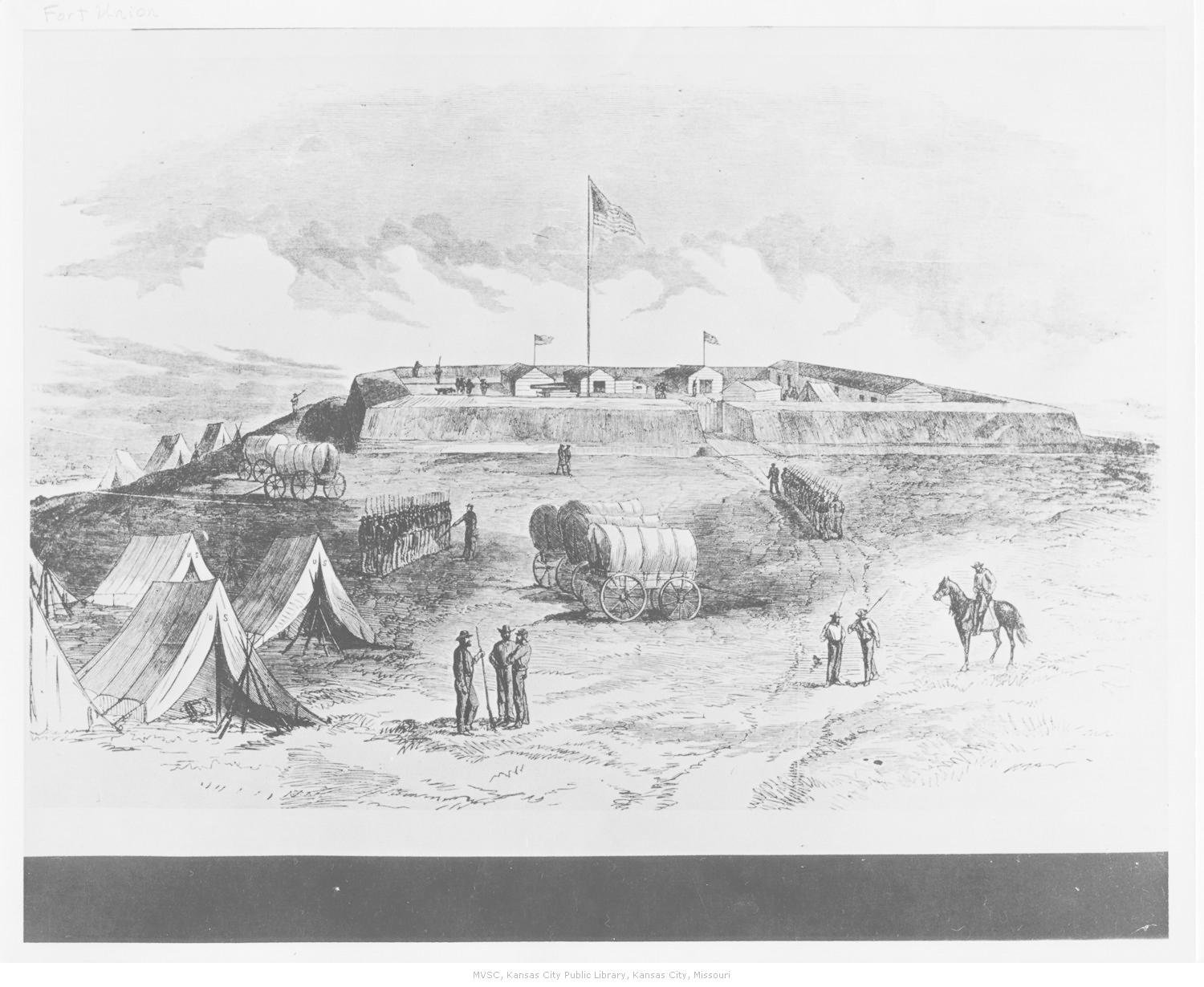 A historical marker plaque was installed in 1957 by the Native Sons and Daughters of Greater Kansas City. Image obtained from the Historical Marker Database. 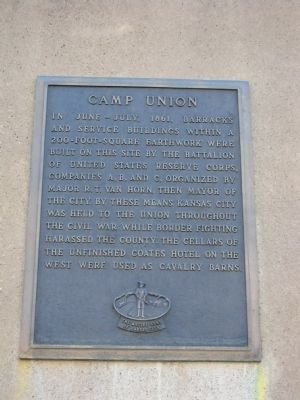 The marker is located on a parking garage around the original site of Camp Union. Image obtained from the Historical Marker Database. 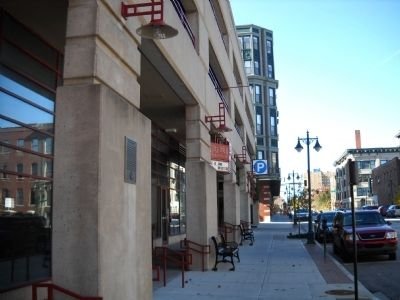 Missouri was heavily divided at the beginning of the Civil War, with significant support present for both the Unionists and secessionists. A convention of delegates from all over the state assembled to debate whether or not to secede and ultimately chose to declare neutrality in the conflict. Governor Claiborne Jackson was a Confederate supporter, however, and as the war began in April 1861 he began making moves to seize federal property in Missouri. One of the governor’s main opponents was Kansas City Mayor Robert T. Van Horn, who was a staunch Unionist. Jackson ordered Van Horn to resign, and on April 30 a group of pro-secessionists in Kansas City raised a Confederate flag at Second and Main Streets. Van Horn refused to back down and, fearful that Confederates would take over the city, requested assistance from the U.S. Army.

On June 14, 1861, Union troops from Ft. Leavenworth were dispatched to occupy and defend Kansas City. Led by Capt. W. E. Prince, the force consisted of two infantry companies and five cavalry companies. With the immediate threat subsiding, Van Horn organized a local volunteer reserve battalion, referred to as the Home Guard, to assist the Union troops. The battalion consisted of three companies led by Van Horn himself, who had requested and received a commission as a major in the U.S. Army. The battalion was briefly headquartered on Walnut Street, before moving to a new location around the corner of East and Central Streets. This was the future site of the Coates House Hotel, originally known as the Broadway Hotel. Construction of the building began in 1857, but work was halted for the duration of the war. The troops built an encampment on the site named Camp Union, also known as Fort Union. A 200-square-foot breastwork was erected around the site, and the unfinished hotel foundation was converted into a stable for the cavalry horses. Two howitzers and a single cannon from the Bleeding Kansas conflict were installed to defend the camp. Along with the camp, there were also quartermaster’s stables on the opposite side of Tenth Street; a commissary warehouse on the riverbank; and a hospital in the Farmer’s Hotel on Grand Avenue.

Thanks to the quick and early intervention of Union troops, Kansas City remained largely safe throughout the war. However, the surrounding area was plagued by secessionist guerilla raids, which harmed business in the city. In October 1864 Confederate General Sterling Price led his Army of Missouri into the modern-day boundaries of Kansas City, before being defeated in the Battle of Westport. It was the largest battle in the Western theater of the war. Price’s defeat led to the virtual collapse of the Army of Missouri and ended any chance of bringing Missouri into the Confederacy. It was the last time that Kansas City faced any serious threat during the war.

At the end of the Civil War, Camp Union was dismantled and construction on the Coates Hotel was completed. In 1957 a historical plaque commemorating Camp Union was installed on a nearby parking garage by the Native Sons and Daughters of Greater Kansas City, a local preservationist group.