This marker indicates the location of a cemetery that existed here from at least the 1830s to 1877. It is referred to as the Old French Cemetery because most of the graves were of the early Kansas City pioneers, who were French in origin. Near this location was the St. Francis Regis church, which served as the main religious and social center for the community. Around 1877, the city's growth forced the cemetery to close; the graves were removed and re-interred in the Mount St. Mary's Cemetery.

English side of the marker. Image obtained from the Historical Marker Database. 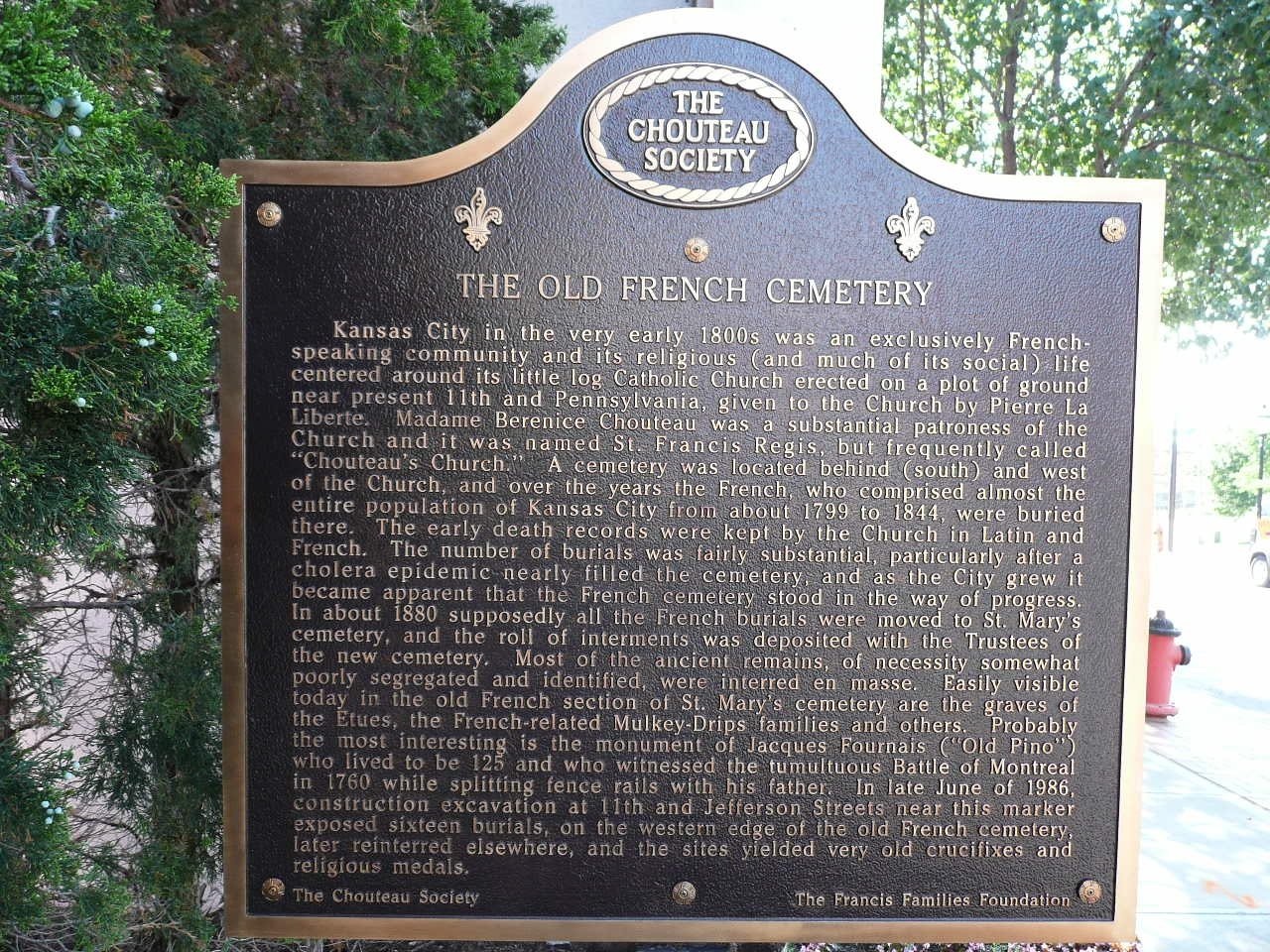 French side of the marker. Image obtained from the Historical Marker Database. 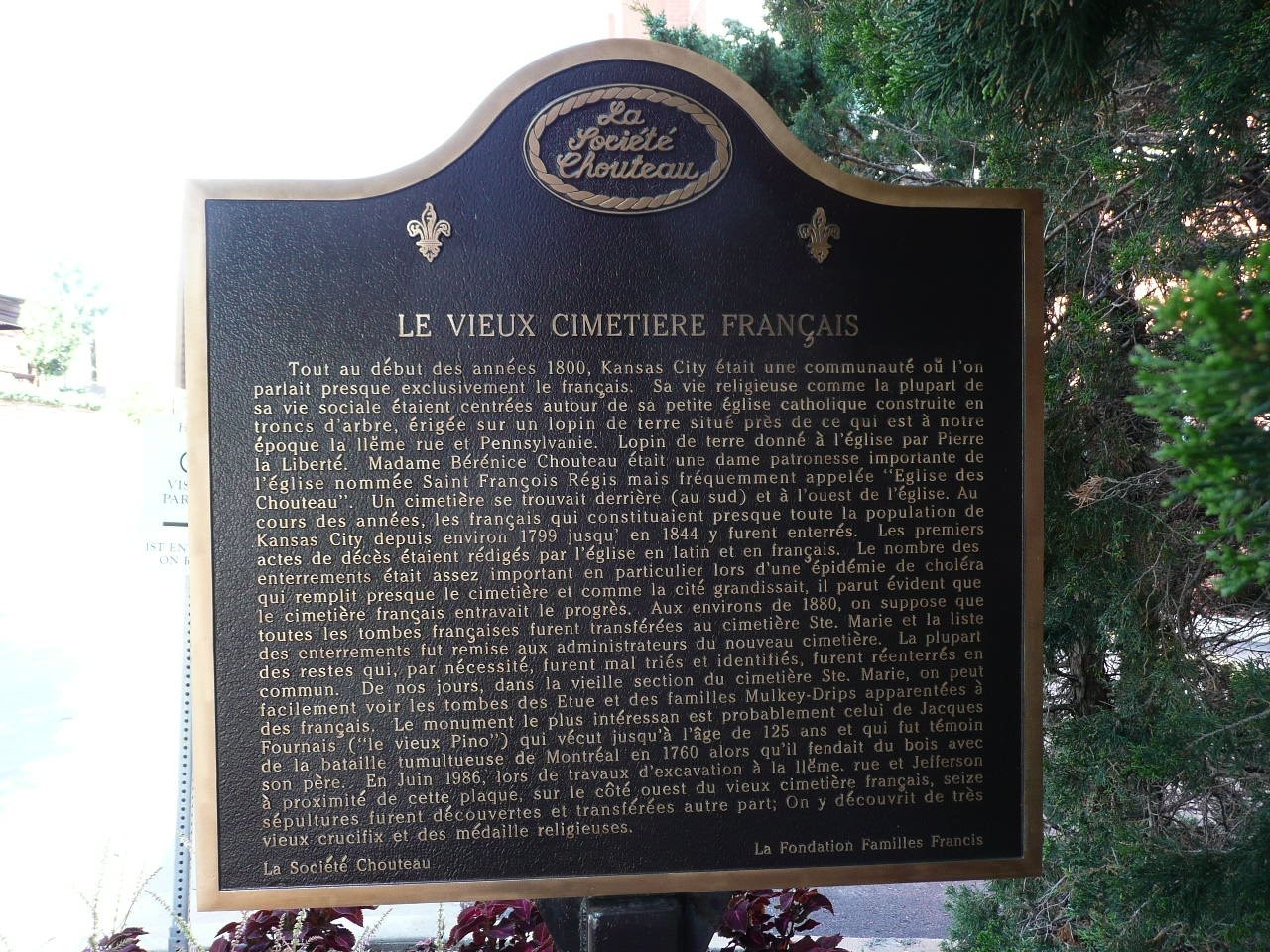 The marker is located beside a parking garage, near the original site of the cemetery. Image obtained from the Historical Marker Database. 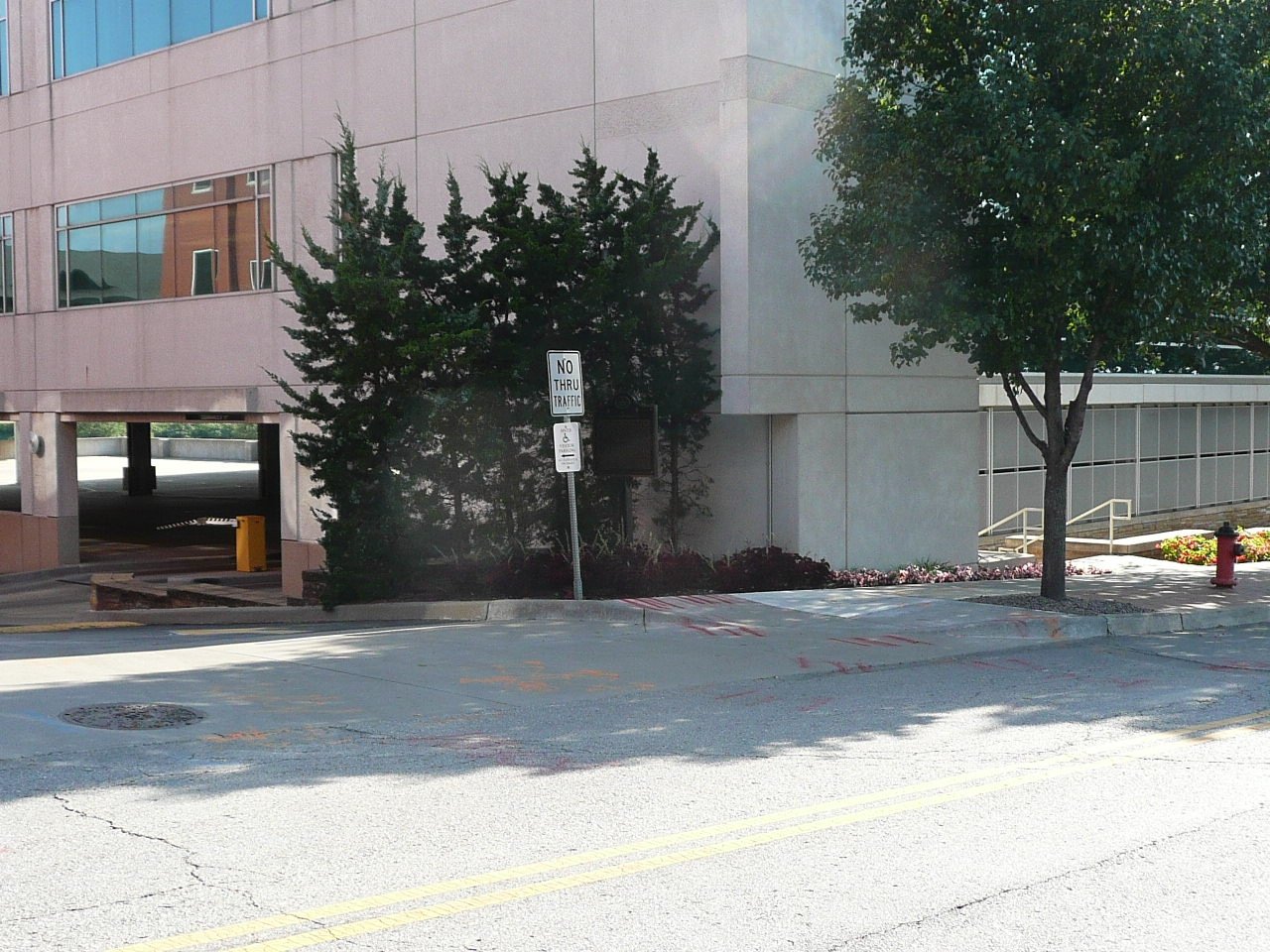 Many of the earliest Europeans to settle in the Kansas City area were French immigrants. Around 1834 Father Benedict Roux, the local Catholic priest, purchased a 40 acre plot of land to build a church for the community. In 1835 he built a log church (the first in Kansas City) named the St. Francis Regis, and established a cemetery behind it. Most of the early French population ended up being interred in this cemetery. The first death records were recorded by the church in both French and Latin. Hundreds were buried over the years; the known graves include those of Kansas City pioneers such as Pierre and Eleonore LaLiberte, Benoise Troost, Gabriel Prudhomme, the Etues family, the Jarboe family, the Chouteau family, and J. Pino Fournaise, who according to legend lived to be 124. A large number of people buried there were the victims of disease, including a cholera epidemic.

The original St. Francis Regis church was eventually replaced by what is now the Cathedral of the Immaculate Conception. As Kansas City grew and encompassed the site, it became clear to some that the old French cemetery had become an impediment to development. The cemetery officially closed in 1877. By 1880 all of the known graves had been exhumed and reinterred at the new Mount St. Mary’s Cemetery, which had been established on 22nd. Many of the graves were unidentified and reburied en masse as a result. In 1986 construction work on 11th and Jefferson Streets uncovered sixteen graves from edge of the French cemetery that had been forgotten. They were subsequently reinterred at St. Mary’s; reportedly a number of crucifixes and other religious items were found with the remains.

Today all that remains of the old French cemetery are the transferred graves, which reside in their own section at Mount St. Mary’s Cemetery. In 1984 the Chouteau Society was founded to preserve and commemorate the early French heritage of Kansas City. One of its projects was the erection of a historical marker near the site of the original French cemetery. Funding for the marker was contributed by the Francis Families Foundation and the Mildred Lane Kemper Fund. In a nod to the city’s French history, the marker features an inscription in English on one side and in French on the other. The marker was one of eleven placed around Kansas City by the Chouteau Society. The Society dissolved around 2008, and the Jackson County Historical Society has assumed responsibility for the maintenance of the markers.

Long before Kansas City was a bustling American midwestern metropolis, it was a colonial frontier claimed by the French crown as part of the Mississippi River’s drainage basin. The French used the vast territories under their nominal control to exploit natural resources for profit, namely fur. French traders traveled deep into the North American territories along the Mississippi and its tributaries in order to establish forts and trade posts to trade with Native American tribes who controlled the lands France claimed. This relationship where Native American lands claimed by France lasted from the mid-seventeenth century up to the mid-eighteenth century when France lost or sold all their claims to North American territory save for the small fishing settlements on the islands of St. Pierre et Miquelon. This historically significant French heritage of the region was researched and shared in the Kansas City area by the work of the Chouteau Society. Originally organized in 1984, this group of volunteers worked to preserve the memory of Missouri’s French past by placing a series of eleven markers around the Northern Kansas City area. Two of the markers are in Westport and not included on this tour in order to reduce the length of this tour, which was designed to offer both a concise introduction and a short drive. The markers on this trail feature both English and French inscriptions, and they cover various important topics and locations around Kansas City related to early French traders, settlers, and entrepreneurs. The Chouteau Society ceased operation in 2008, but thankfully, their work has continued through the work of the Jackson County Historical Society.