The modern view of the Louisville Visitors Center 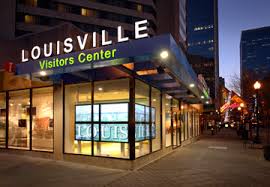 The Louisville Visitor's Center is located in the heart of Louisville's downtown area and provided foundation to the success of the Civil Rights movement's impact on Kentucky citizens.  The Fourth Street location was the thriving center of restaurants, department stores, and theaters and provide the city with energetic influences from a variety of cultures to encompass Louisville's evolving social complexity.

The location of Fourth Street(Louisville Visitor Center) is attributed to the arrest of fifty eight people of which fifty two were taken to the Juvenile Detention Center.  The arrested citizens were brought in for their misconduct involving their works in the protest of discrimination.  The charges of the fifty two juveniles were dropped but remained a model figure to the demonstrations to come.  The demonstration captured the eyes of the Mayor to make an official statement for the demonstrator's to return home and those who did not would be arrested.  The public interest attributed to the Fourth street demonstrations marked the uprising of equal rights for all races and the impact they would have upon the Civil Rights Movement.

The Louisville Visitor Center location entailed political achievements of the twentieth centuries Fourth Street hub to integrate all races into businesses, restaurants, and the simple task of eating at a restaurants counters.  The revolutionary impact the social hub of Fourth Street marked the beginning of the Downtown Historic Civil rights tour and the emergence of the equal rights among all economic generating patrons. Though many business establishments are gone now, the site of Fourth Street's integrated cultural spirit developed in the late nineteen fifties and the early nineteen sixties remained a part of Louisville's historic heritage.  The effects of the powerful legislation, Public Accommodation Ordinance(1961), displayed Louisville's ideological objective to integrate society and reflected the progressive impact of the Civil Right's movement within Louisville's economics, politics, and formation of culture.