This Stone House was commissioned by San Franciscan attorney Frank M. Stone in 1886 as his own personal home. The house was designed by Architect Seth Babson as a wood-frame house with two stories over a partially exposed basement and an attic under steeply pitched roofs.

A shot of the house from the front through the front garden tree. 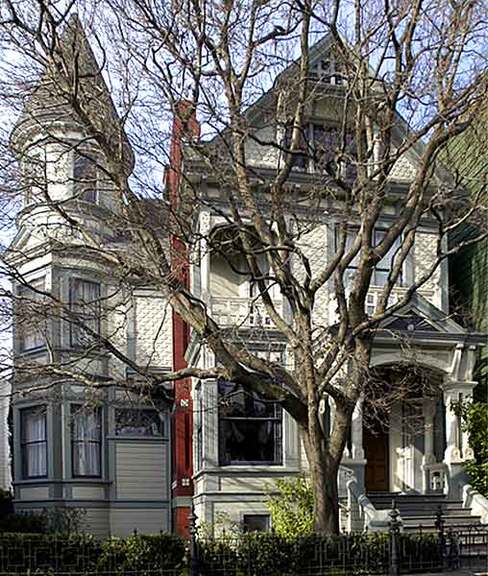 Frank Stone was the son of a noted New England attorney. He left home on a sailing vessel and visited the Azores, the West Indies, and Europe before finally arriving in San Francisco in 1874 where he completed his legal studies.

He served as Deputy District Attorney of the City and County of San Francisco for a short period. In 1882, he teamed up with A. A. Sargent, a former Minister to Germany and a former United States Senator. This partnership lasted until Sargent's death in 1887.

One of his most notable cases was The People vs. Tarm Poy, a case of hatchet murder in Chinatown. Stone represented the family of the deceased and manoeuvred his way through a net of complexly woven circumstantial evidence to gain a conviction. In gratitude, the Fong family solicited contributions from its members throughout California and presented Stone with a solitaire diamond as well as his fees.