Kaw Point is where the Kansas River, also known as the Kaw, dumps into the Missouri River. Captain Meriwether Lewis and Lt. William Clark camped on this spot from June 26-29th, 1804 on their way up the Missouri River to explore the newly acquired land from the Louisiana Purchase. During their stay, they hunted, took measurements and calculations of the area, and repaired the boats. It is also the site of the first court martial on the expedition. An organization known as Friends of the Kaw initially started the project of creating Kaw Point Park and are the reason a group of reenactors stopped at Kaw Point as part of the Bicentennial of Lewis and Clark. Today, Kaw Point Park is complete with an open air information kiosk, an Encampment Amphitheater, a boat ramp, and walking trails. This spot serves as a perfect place to exercise, see beautiful views of the rivers and Downtown Kansas City, learn about important figures in American history, and also provides water access for the surrounding community.

One of markers at the park 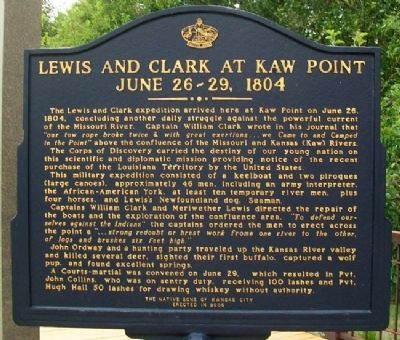 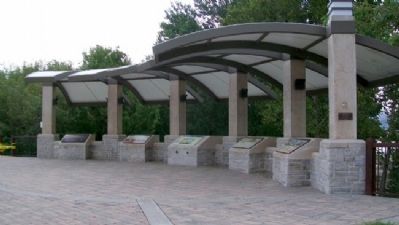 Kaw Point as seen from the air. Photo: Americasroof, via Wikimedia Commons 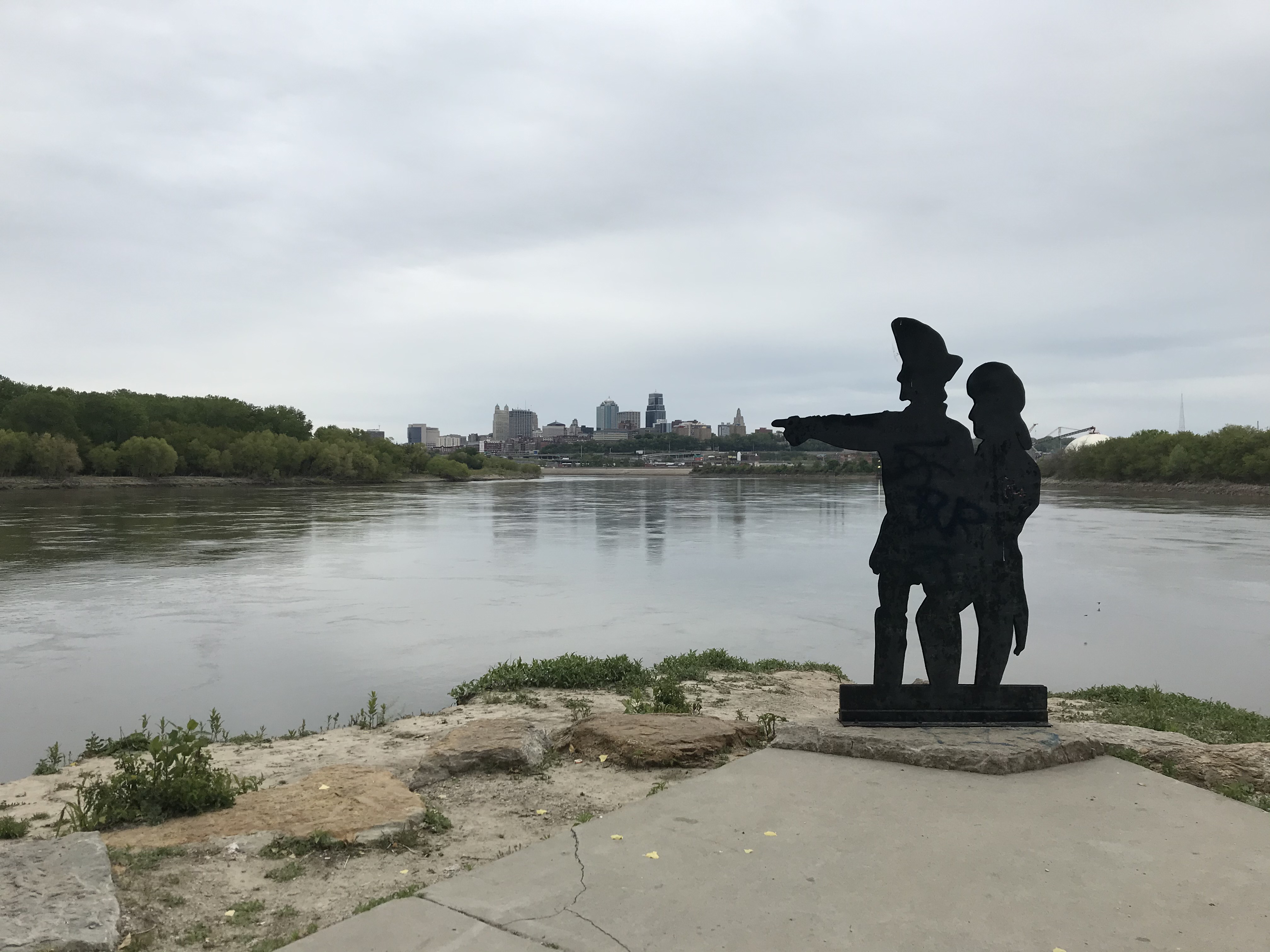 Before 2002, Kaw Point was just an old junkyard with leftover construction equipment and trash. Very few people knew that Lewis and Clark had camped at Kaw Point or what had happened during their stay. Not many people knew that the first court martial on Lewis and Clark’s journey was held at Kaw Point and along with many other historical values this site holds. It had a few markers indicating it was a place that Lewis and Clark had camped and, with the tangled mess of trees, trash, and equipment, it was not a place people would go see. An organization called Friends of the Kaw was dedicated to cleaning up the Kansas River and was always looking for ways to improve the river and areas surrounding it. When a member of Friends of the Kaw, named Mike Calwell, heard about a Lewis and Clark Bicentennial that would be coming through in 2004, with a group of reenactors stopping at places where Lewis and Clark had, he jumped on the opportunity and decided something had to be done with Kaw Point. He was excited about the Lewis and Clark Bicentennial, but also saw this as a perfect opportunity to clean up this very run down area along the river and to put in a much needed boat ramp. The project began to start cleaning up Kaw Point, turning it into a park, not only for the reenactors, but also for the locals of the area to have access to the river. Through countless volunteer hours and funding from the government and private businesses, Kaw Point was soon transformed from a junkyard to a beautiful park complete with walking trails, an open air kiosk with information on Lewis and Clark’s journey and time spent at Kaw Point, along an with amphitheater, known as the Encampment Amphitheater which containing large limestone rocks on which people can sit on inscribed with the 51 names of the men who were on the expedition, including Lewis’ dog, Seaman who accompanied the crew along their voyage. This was all done by June of 2004, just in time for the reenactors to come in.

The Discovery Expedition of St. Charles was a reenactment group that took on the roles of the men of the original Discovery Corps and, using a keelboat and two pirogues, types of boats used during the original expedition, they made the same voyage Lewis and Clark had 200 years before, stopping at specific landmarks. They tried to stick to the exact same trip as much as possible, even dressing the same and eating similarly. They came to Kaw Point Park on June 26-28th and built a replica redoudt, a type of fortification, reenacted the famous court-martial scene, and reenacted many other things recorded in the expedition journals. They held workshops for visitors to come and learn more about the expedition, shared about what Lewis and Clark would have seen, and even had workshops talking about York, Clark’s slave that was later freed. The Encampment Amphitheater served as a perfect place as the site of the reenacting of the court martial scene. Although this seems like an odd thing to commemorate, this was the first time it had happened on the original trip, making Kaw Point an important point on the map.

What many people consider to be the rise of America can also be viewed as the fall of Native Americans, with Lewis and Clark’s expedition being at the heart of this. Some view it as the beginning of the end. Although the Discovery Corps did not encounter any Native Americans during their stay at Kaw Point, this was a very common topic when deciding what should go into Kaw Point Park. Some historians found out what Native American tribes were in this area during the original expedition to get their opinions of the matter. These tribes were contacted and asked if they would speak at the bicentennial, sharing their heritage.  Also, the open air kiosk is surrounded by an area known as the Confluence of Nations Plaza, giving information not only about Lewis and Clark, but also Native Americans during this time. Surrounding the kiosk is an area known as the Confluence of Nations, which contains plaques with the names of the 19 Native American Tribes in the area during the time of the original voyage along with each tribe's flag in front of their plaque. These 19 tribes included the Wyandotte, Wea-and-Pianshaw, Shawnee, Seneca, Sac-and-Fox, Quapaw, Potawatomie, Peoria, Ottawa, Otoe-Missouria, Osage, Miami, Kick-a-poo, Kaskaskia, Kansa, Iowa, Delaware, Chippewa, and Cherokee. Many tribes were very much in favor of the park, with many of them showing their support by buying donor bricks.

Since 2004, there have been a few more additions to the park, including a silhouette statue of Lewis and Clark called “Proceeding On”, better trails, and a connector to the Lewis and Clark Heritage Trail. In 2012, the United States National Park Service, through the Lewis & Clark National Historic Trail, recognized Kaw Point Park as a Lewis and Clark Destination Site. The park continues to provide the surrounding area with water access, stormwater education, and is the starting point for the Missouri 340, a canoe and kayak race. Kaw Point Park continues to be a reminder of the days of the first expedition, while also remaining an important part of the community.

As the kiosk explains, President Thomas Jefferson bought the land east of the Mississippi River through the Louisiana purchase, he instructed Captain Meriwether Lewis and Lt. William Clark to go on an expedition to explore the newly purchased land in an attempt to find a way to the Pacific Ocean by means of water. Lewis and Clark set out in May of 1804 and headed up the Missouri river. On June 26th, 1804, when they came to the place where the Kansas River, also known as the Kaw, dumped into the Missouri River, they decided to camp there for three days. While there, their men hunted, trapped, took mathematical measurements of the land, and repaired the pirogues. They built a temporary fortification, called a redoudt, which was made of timber standing about 6 feet tall. After writing about the size of the Kansas River, Clark weighed the waters of the Kansas and Missouri River and found that the Kansas River water was lighter, meaning it contained less sediment and mud. Regardless of these findings, Clark wrote in his journal that “the waters of the Kansas is verry disigreeably tasted to me.” Their journals also included how many animals the men brought back during their stay and recorded killing a young wolf. They also wrote about “a great number of Parrot queets” which is a now extinct species known as the Carolina parakeet. This was the first recorded case of parakeets west of the Mississippi River. Some men also spotted some bison which were the first to be seen on the trip.

On the last night of the camp at Kaw Point, John Collin and Hugh Hall were in charge of watching the whiskey barrels throughout the night. They instead got into the whiskey and became drunk. Once the men were found drunk the next morning, they were put under arrest. Clark drew up papers for a court-martial. Collins pleaded not guilty and the court sentenced him to 100 lashes on the back while Hall pleaded guilty receiving 50 lashes on the back. Regardless of the lashes, both men were expected to be at the oars that afternoon when the expedition took off, heading up the river. This was the first time on the expedition that there was a court-martial.  In total, the men stayed there from the evening of June 26th to afternoon of June 29th.

Kaw Point Park serves as a beautiful park and reminds visitors of the historical importance of the original Corps of Discovery led by Captain Meriwether Lewis and Lt. William Clark. Through the building of a commemorative site, history brings a community together time and time again and still has a major impact on the people even in the present. The community can use this park to exercise, see beautiful views of Downtown Kansas City, and use the very same river that Lewis and Clark did so many years ago, all while standing in the same place that these Pioneers had over 200 years ago.