Linsly-Chittenden Hall (LC) is a Yale building containing seminar rooms and lecture halls. During the 1960s, it was the site of Stanley Milgram’s famous social psychology experiments. Milgram was interested in the human tendency to obey authority figures. He wanted to test the limits of obedience: to what extent would someone follow orders that seemed immoral or evil? His experiments took place in the aftermath of the Holocaust, at a time when countless people were questioning how ordinary people had allowed such atrocities to occur. Milgram, the child of Jewish immigrants from Eastern Europe, sought to shed light on these questions. He recruited Yale students and New Haven residents for his experiment. Study participants took on the role of "teacher." They were told by the a scientist to ask another person, a "learner," a set of questions and deliver electric shocks as punishment for wrong answers. The shocks became more intense over the course of the questioning until the "teachers" were administering lethal levels of electricity. 65% of them obeyed orders to use deadly force. What the study volunteers didn't realize was that they themselves were the subject of Milgram's research, and that he was testing their obedience to authority despite their own consciences. The shocks were fake, and the "learners" were actors. The Milgram experiment proved controversial. Critics were appalled at the treatment of experimental subjects, arguing that it was unethical to deceive unsuspecting volunteers and induce them to participate in such an upsetting experiment. The experiment's notoriety contributed to new developments in experimental procedure (most notably, an informed consent policy). Below you can watch Milgram's documentary "Obedience." 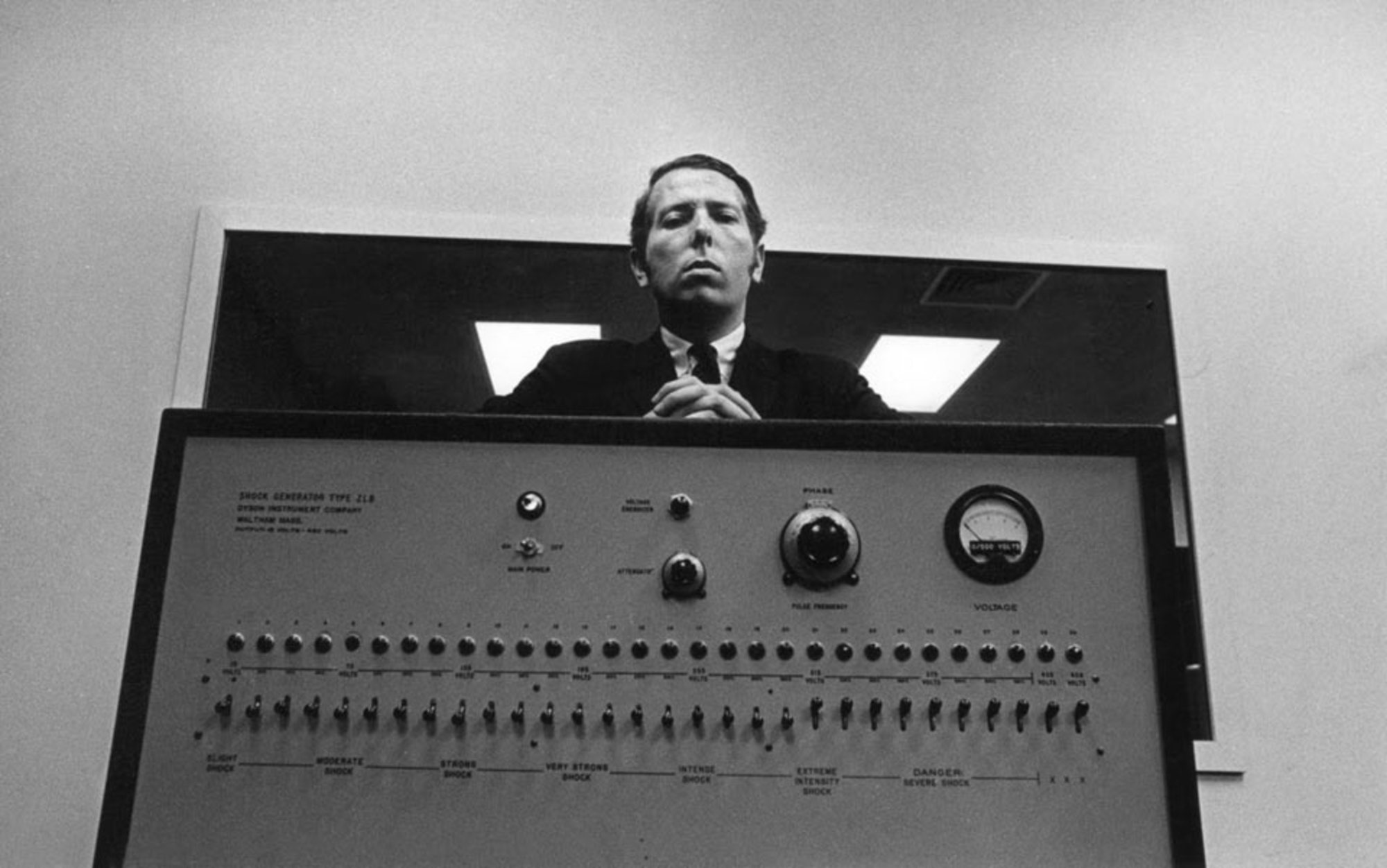 Born in New York City in 1933, Stanley Milgram graduated from Queens College in 1954 and then earned a PhD at Harvard, where his doctoral research examined conformity. In 1962, Milgram accepted a professorship at Yale. During his time there, he conducted his experiments on obedience to authority.

Study participants were informed that the research was meant to explore how punishment affected learning and memory. They were given a series of word-pair questions to ask a "learner." Below is an excerpt from the experimental transcript. The "teacher" is the study participant who is ordered to ask questions and give electric shocks in response to wrong answers. The "learner" is the trained actor who must answer the teacher's questions and deliberately gets some wrong. The "experimenter" is the scientific authority giving orders to the teacher. Milgram remained out of sight, observing the teacher's behavior.

Learner: (who from the teacher's point of view is heard but not seen, an offstage voice) Ow, I can't stand the pain. Don't do that...

Teacher: (pivoting around in his chair and shaking his head) I can't stand it. I'm not going to kill that man in there. You hear him hollering?

Experimenter: As I told you before, the shocks may be painful, but--

Teacher: But he's hollering. He can't stand it. What's going to happen to him?

Experimenter: (his voice is patient, matter-of-fact) The experiment requires that you continue, Teacher.

Learner: Let me out of here. My heart’s bothering me! (Teacher looks at experimenter.)

Experimenter: You’ll have to go back to the beginning of that page and go through them again until he’s learned them all correctly.

Experimenter: The experiment requires that you go on.

Teacher: What if he’s dead in there? (Gestures toward the room with the electric chair.) I mean, he told me he can’t stand the shock, sir. I don’t mean to be rude, but I think you should look in on him. All you have to do is look in the door. I don’t get no answer, no noise. Something might have happened to the gentleman in there, sir.

Experimenter: We must continue, please.

Teacher: You mean keep giving him what? Four hundred fifty volts, what he’s got now?

Experimenter: That’s correct. Continue. The next word is “White.”

Experimenter: Excuse me, Teacher have to discontinue the experiment.

(Enter Milgram from camera’s left. He has been watching from behind one-way glass.)

Milgram: I’d like to ask you a few questions. (Slowly, patiently he dehoaxes the teacher, telling him that the shock screams were not real.)

Milgram's research indicated that a large number of people would, despite misgivings and protests, obey an authority figure and inflict severe pain and harm on others. 65% of the participants in his initial experiments obeyed the experimenter's order to deliver a 450-volt shock. These results suggested that there was nothing different or unusual about Germans that could explain Nazi atrocities; the American men in Milgram's experiment exhibited a similar tendency to obey orders. His research remains famous for its unsettling implication that anyone has the potential to commit acts of extreme evil.

Criticism of the Study and the Development of Research Ethics

Critics of the study asserted that it was unethical to subject study volunteers to intense psychological stress, particularly without their knowledge or consent. The Milgram experiment was one of many during the 20th century that prompted scientists to reevaluate ethical standards. These other experiments include:

-  San Antonio Contraceptive Study, Texas, 1971, which recruited approximately 70 low-income Mexican-American women who were told that the study was focused on side effects of oral contraceptives. What they didn't know was that half of the study volunteers simply received a placebo (and the halves were swapped over the course of the study). 10 volunteers had unplanned pregnancies as a result.

- Tearoom Trade Study, mid-1960s, conducted by Laud Humphreys for his PhD dissertation entitled "Tearoom trade: a study of homosexual encounters in public places." His study was criticized for invading privacy and supplying personally identifying details on the men he studied.

Furthermore, the Report highlighted the importance of informed consent and respect for privacy, and instructed researchers to avoid exploiting marginalized or vulnerable populations. The Report remains in force today, informing the ethical decisions made by institutional review boards (IRBs) regarding ethical research with human participants.

Meyer, Philip. "If Hitler Asked You to Electrocute a Stranger, Would You?." Esquire. February 1970. http://www.unc.edu/~pmeyer/General_Publications/Hitler.pdf.

Romm, Cari. "Rethinking One of Psychology's Most Infamous Experiments." The Atlantic. January 28, 2015. https://www.theatlantic.com/health/archive/2015/01/rethinking-one-of-psychologys-most-infamous-exper....