This site was the childhood home of Malcolm Little, who was born on May 19, 1925, and would later change his name to Malcolm X to symbolize the brutality of slavery that included the loss of the right to name one's own children. Malcolm X would go on to become one of the most influential leaders of the 20th century. His parents, Earl and Louise Little lived at this home and it was here that Malcolm came into the world. Earl Little was a Christian minister and was active in the local community. In his autobiography, Malcolm X states that he and his family left the Omaha community for Milwaukee, Wisconsin in 1926 because of threats of the Ku Klux Klan.

The birthplace of Malcolm X is maintained by the adjacent Malcolm X Memorial Foundation which is working on creating a 14 acre memorial at this site. 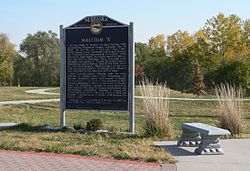 Given the brutality many African Americans faced when they attempted to integrate into the larger society, Malcolm X advocated racial separatism over integration and believed that the Black community should work toward becoming economically and politically independent of white people and white institutions. Malcolm X preached non-violence, but he also believed in the legitimacy of violence when it was necessary for self-defense. In 1952, Malcolm X joined the Harlem- based Nation of Islam- the Black Muslims- and quickly became a spokesperson for the Nation of Islam under the tutelage of Elijah Muhammad. Malcolm X's charisma was unmatched, and his wit was truly unrivaled.
The house was destroyed in 1965, with little attention as few made a connection between the house and the influential civil rights activists at that time.