For chess enthusiasts, the World Chess Hall of Fame is a must visit. It houses the U.S. and World Hall of Fames and a museum that showcases the history of chess and its impact on the arts and culture. It was founded in 1986 by the U.S. Chess Federation, which is now U.S. Chess. Inside, visitors will find numerous chess sets, trophies, photographs, scoresheets, and periodicals. Interesting items include the Paul Morphy silver set, which he used to win the First American Chess Congress tournament in 1857. Another highlight is the perpetual trophy for the Piatigorsky Cup, which commemorates one of the best American chess tournaments. Chess sets are available for visitors to play on. The museum also offers various public programming such as lectures, panel discussions, and activities for children.

The World Chess Hall of Fame opened at this location in 2011.

A view of the largest chess piece in the world 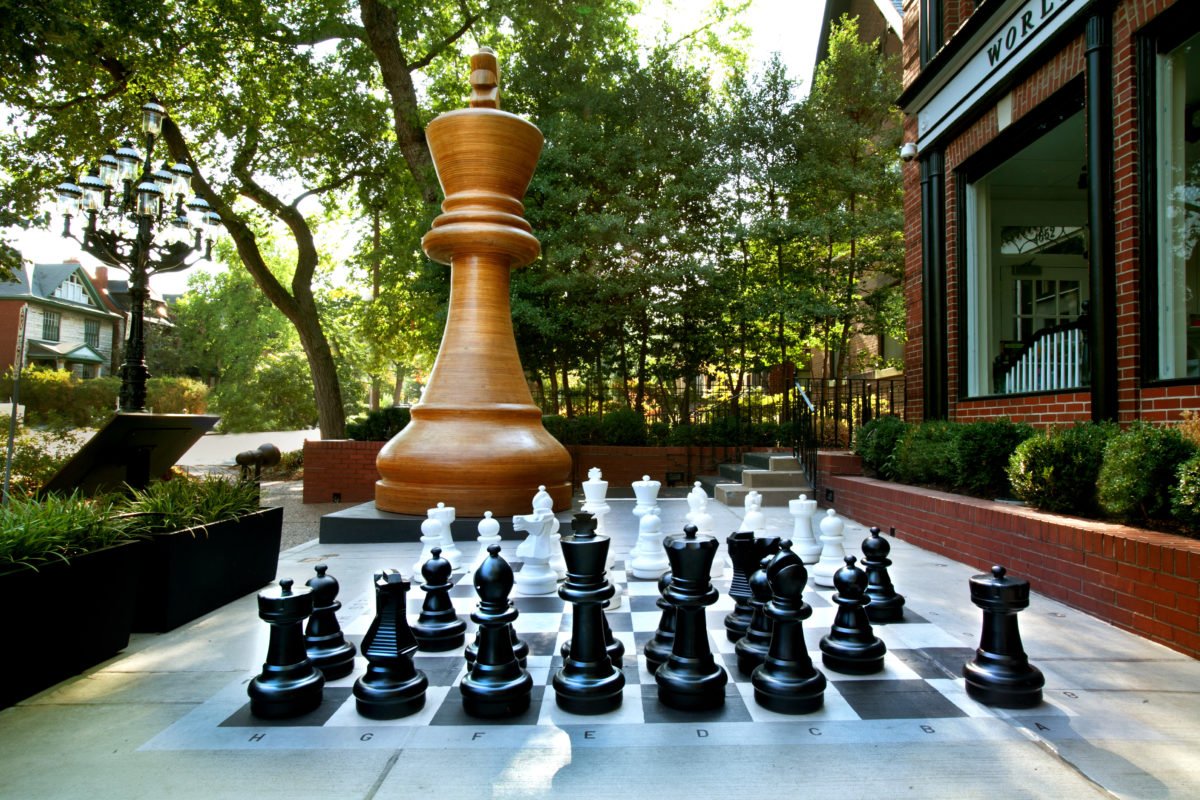 Interior view of the World Chess Hall of Fame 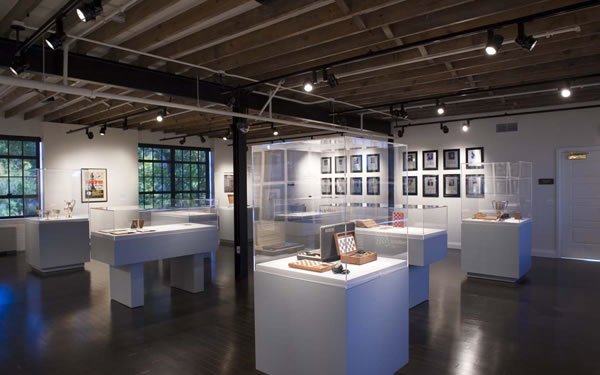 "Insect" chess board at the WCHOF 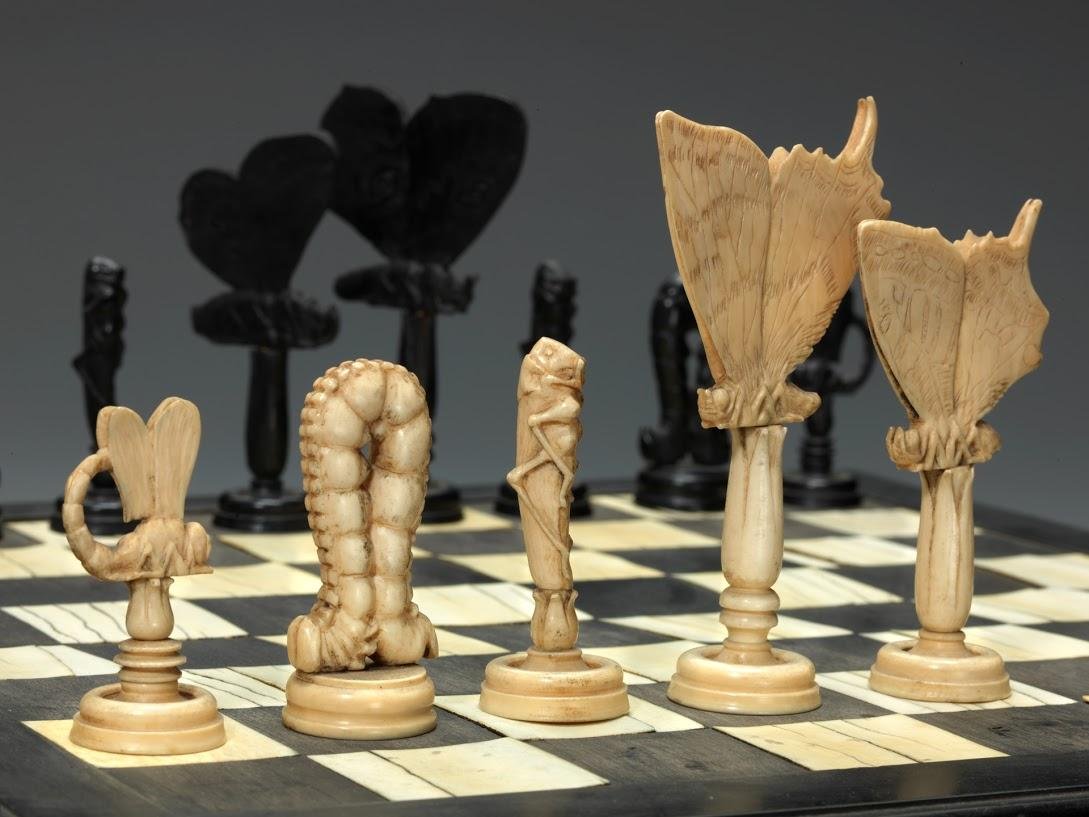 The museum was originally housed in 1988 in a small basement room of the U.S. Chess Federation in New Windsor, NY. Originally affiliated with FIDE, the International Chess Federation, the hall at that time contained only a few artifacts, and offered its members a postal chess program, a magazine (Chess Life), and discounts on chessboards, computers, etc. The U.S. Chess Trust purchased the museum and moved its contents to Washington, DC, where the expanding collection included trophies, numerous chess sets and the first Hall of Fame inductee plaques.

In 2001, the institution moved into a new multimillion-dollar facility at the Excalibur Electronics headquarters in Miami, FL. This version of the Hall of Fame closed in 2009. Then Jeanne and Rex Sinquefield provided the seed money to move the collection to its present location in a nearly 16,000-square-foot space in the bustling Central West End neighborhood of St. Louis. To celebrate the opening of the institution in 2011, a game of “human chess” was held, in which Grandmaster Hikaru Nakamura participated, portraying the Black king. The Saint Louis Chess Club (STLCC), founded in 2008, together with the WCHOF form the Saint Louis Chess Campus. The joint success of the STLCC and WCHOF has made Saint Louis, according to the hall, "the premiere chess destination worldwide." The U.S. Chess Federation named Saint Louis “Chess City of the Year” in 2009 and 2011.

Part of the mission of the WCHOF is to make chess accessible to as many people as possible. It has explored many connections between the ancient game and contemporary issues and interests, such as chess in art, fashion, and comic books. Past exhibitions have included "Power in Check: Chess and the American Presidency," which detailed the history of American presidents, from Thomas Jefferson to William Jefferson Clinton, and their fascination with the royal game, and "A Memorable Life: A Glimpse into the Complex Mind of Bobby Fischer,” profiling the legendary and controversial American chess master.

More recently, the hall has offered "M.C. Escher: Infinite Variations," which examines the mathematical and metamorphic works of world-famous graphic artist and chess enthusiast, M.C. Escher. The exhibit, according to the program, "features an extensive collection of drawings, mezzotints, lithographs, and woodcuts, which blend and blur constructs inspired by impossible worlds, the intricacies of nature, and the infinity of chess.” Another recent exhibition focuses on the Cairns Cup, a nine-round classical chess tournament created by the STLCC that is bringing together one of the strongest international fields ever assembled in women’s chess. In honor of the cup, the exhibition contains highlights related to women’s chess from the WCHOF collection.

The WCHOF building is immediately recognizable by the huge chess piece -- the largest in the world according to the Guinness Book of World Records -- situated in front of it. It is a large-scale version of a “Championship Staunton” king, custom-designed by The House of Staunton in 2013 for use in the first Sinquefield Cup. A joint effort between the WCHOF and the STLCC, the giant king piece is 53 times larger than its model and measures 20 feet tall and 9 feet, 2 inches in diameter at the base, and weighs almost 11,000 pounds. It is made of African sapele mahogany. This record of the largest chess piece in history was achieved on April 6, 2018.

"The iconic king chess piece not only serves as a beacon for the Saint Louis Chess Campus, but also a regional and national landmark that exemplifies Saint Louis' impact on the sport and art of American chess," said Brian Flowers, WCHOF Marketing Communications Coordinator.