Ranked the fourth best college museum in the country in 2015, the Saint Louis University Museum of Art boasts an impressive collection of art. The collection consists of modern and contemporary art, American-west Jesuit mission art, and Asian decorative art. The first floor of the museum is used for temporary exhibitions. Modern and contemporary artists represented include Andy Warhol, Serge Poliakoff, Richard Serra, Jasper Johns, and Chuck Close. The Jesuit collection features art and artifacts that shed light on Jesuit frontier life. As of May 2017, the Asian collection, which is on the fourth floor, is closed for renovation. It consists of artifacts dating from 3,500 years ago to today. Items include jade and ivory artifacts, figurines, and prints.

The Saint Louis University Museum of Art is located in the former St. Louis Club building, constructed in 1900. 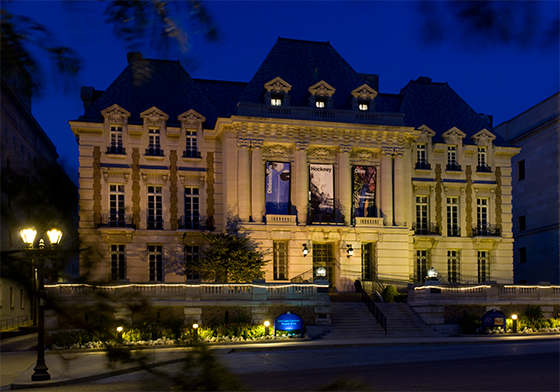 The museum is housed in a historic building constructed in 1900 for the St. Louis Club, which was founded in 1866. The building is a city landmark and was designed in the Beaux Arts style, which was popular in the country at that time. It is believed that the idea for the 1904 St. Louis Fair originated here. A fire in 1925 signaled the end of the club. The building wasn't very damaged but nonetheless the building was sold. A series of companies owned the building until St. Louis University bought it in 1992 from SLU alum Francis O'Donnell. It was named after him and became home to the SLU graduate school and School of Public Health. The building became the museum in 1998.