This mansion belonged to William Bourn, the head of Spring Valley Water Company who had made his fortune from his Empire Mine near Grass Valley. He commissioned the house in 1897 and chose a young Willis Polk to design the townhouse in a Carolingian style. Polk had previously designed the offices and main residence at the Empire Mine, and contributed much of the design towards Bourn's magnificent estate, Filoli, on the Peninsula 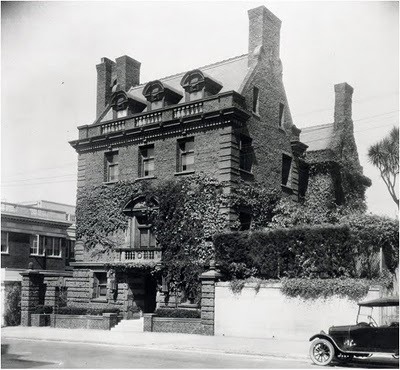 William Bourn was considered to be the richest man in San Francisco, and possibly even the country. He inherited a fortune from his father and later created and developed Pacific Gas & Electric, now PG&E. Modest by Bourn’s standards, this 27-room mansion is a masterpiece of the bricklayers’ and stonemasons’ art. The mansion was just one of the elaborate buildings owned by Bourn, the likes of which included palatial Empire Mine in Grass Valley, CA., and the Bourn’s famous estate, Filoli in Woodside.

The house was finally cleaned up and sold at auction in 2010, and despite assessments that repair would cost quite a bit more than the house is worth, it remains a Historical Landmark and still stands.

Boulware, Jack. The Fortress on the Hill. SF Weekly. Accessed May 07, 2017. http://archives.sfweekly.com/sanfrancisco/the-fortress-on-the-hill/Content?oid=2135996.