Established in 1846 and constructed in 1848, this structure served as the main building for the Tennessee School for the Deaf and Dumb (as it was then called). Despite being damaged while being used as a Union Army hospital during the Civil War, the building's columns and Tennessee white marble managed to remain intact. After the war, it was the first edifice on the school’s campus to be restored. In 1922, it and other Tennessee School for the Deaf buildings were sold to the city of Knoxville. City Hall moved in in 1925 and remained there until 1980. Most recently, the building has been used as the Duncan School of Law by Lincoln Memorial University. 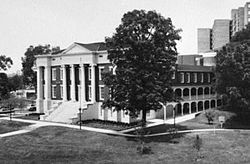 In 1844, Tennessee Governor James C. Jones appointed a board who would work to establish a school for the deaf. The board began by gathering information about the deaf residents of the state and about schools in other states. Soon, they learned about Reverend Thomas MacIntire, a well-liked teacher at the Ohio Institution for the Education of the Deaf and Dumb. MacIntire agreed to become the Tennessee school’s first principal and teacher. The board also decided on the school’s first location: the Churchwell house in East Knoxville. Room and board at the school were originally published as $100 for the school year.

The school was officially incorporated under the name of the Tennessee Deaf and Dumb School on January 31, 1846. That same year, Knoxville native Calvin Morgan donated two acres of land for the construction of a new school building. The “east wing” was the first building on the campus. It was constructed so that it could be added to over time. The main building was constructed from 1848 until 1851 and cost about $28,000. White marble and columns gave the structure an ornate appearance and have remained in good shape over the years.

After the 1848-1849 school year, Mr. MacIntire worked to raise money to pay debts and construct new buildings, especially housing for more female students. Because enrollment increased dramatically, the school was discontinued in 1850 so that the construction of the west wing could continue uninterrupted.  It was finally completed in 1852, one year after a Mr. Morris took over as principal. During the 1850s came a series of improvements: repairs, remodels, the installation of gas heating, and the purchase of new land. By 1861, the school had grown to be one of the largest schools for the deaf in the United States.

Unfortunately, during the Civil War, the school fell into a state of disrepair. Furniture and equipment were destroyed.  Cannon balls hit the roof. The dining room was used as a hospital by the Union Army, and later as stables. After the war, the buildings were no longer fit for use. The state legislature then set aside $5,000 to be used for repairs and $5,000 to keep the school running. When the school reopened in December of 1867, the school’s trustees were surprised at the large number of pupils who enrolled.

In the 1870s, the school continued to expand. From 1870 to 1871, a new house was built for future principals to live in. Later, a new chapel was constructed, and the old chapel was turned into a girls’ dormitory. After the last of these improvements were completed in 1879, the school could accommodate 125 students. More classrooms, stables, a laundry building, a gymnasium, and a hospital were added in the 1890s. As the school entered the twentieth century, further improvements accommodated the ever-growing number of pupils and modern technology.

On September 2, 1922, the Tennessee School for the Deaf and Dumb was sold to the city of Knoxville for $400,000, though the school did not have to move for another two years. The new school, built on the former Dickinson estate property by a former student (architect Thomas Scott Marr), was dedicated in 1924. The next year, City Hall officially opened in the school’s former buildings. City Hall remained there until 1980 when it moved to the City-County Building. Also in 1925, the school officially changed its name to the Tennessee School for the Deaf, eliminating the word “dumb.” The school continues to operate today.

100th Anniversary of the Tennessee School for the Deaf 1845-1945: A History of the School: The Period of Reconstruction and Growth of the Tennessee Deaf and Dumb School, 1866 - 1921. Welcome to the Knox County, Tennessee Genealogy & History Web Site. Accessed January 18, 2019. http://knoxcotn.org/old_site/schools/tsd/schoolhistory_chapt2.htm.