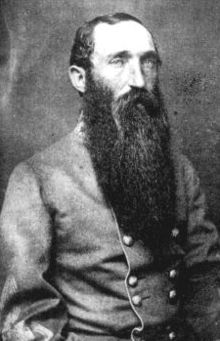 Albert Jenkins set out to show the strength of the Confederacy during his reign as commander. He wanted to defend the Kanawha Valley from the Union at all costs. To do this, he had to deal with the Ohioans across the border. In his first few ordeals, before becoming commander, he captured as many as thirty citizens, making him quite a prominent individual at the time. One of the individuals that attempted to capture him was Colonel J. S. Norton of the First Regiment of Ohio State Troops at the present West Virginia town of Gallipolis. His attempt failed and gave Jenkins a victory, resulting in a huge morale boost for his troops.

The brigade that he led then headed toward St. Albans, in what would become the Battle of Scary Creek, in which Jenkins’ men defeated the North in the first successive open battle for the Southerners. This would further his reputation as a successful military leader. At this time, he became the acting colonel, as George S. Patton was wounded on the battlefield. Jenkin’s ability to take control showed that the South could have significant strength in the Civil War. Commander Jenkins wanted to prove to his soldiers that there was hope.

On September 2nd, 1862, Jenkins crossed the Ohio River, directly across the town of Ravenswood, WV. It is here that he would be the first person ever to raise a Confederate flag in the state of Ohio, where it was placed in, near the Township of Lebanon. This significant spot was momentous in the time of the Civil War. It proved that secession had occurred and that the North needed to recognize the Confederacy’s attempt at separation. It is a spot that lives in infamy in the legacy of Commander Albert Jenkins. For that reason, it is a historic site that should be recognized.

The Border Rangers were originally formed in Cabell County, Virginia (present-day West Virginia).  They were the first unit organized in the area and were created in the late months of 1860, becoming an official part of the Confederate Army in 1861. They were called Company E of the Eighth Virginia Cavalry. The company was led by Jenkins and Ira McGinnis, the two responsible for assembling their original volunteer unit. The crew saw action in Virginia, West Virginia, Ohio, Tennessee, and Kentucky.

Jenkins’s direct involvement with the 8th Virginia Calvary was linked to him commanding the company. He was able to resupply his soldiers with Union weapons at one point when they were running low. He always ensured his men would be at their destination, and well supplied. Eventually, he died serving for the Border Rangers he originally founded.

The unit of volunteers that were turned into soldiers saw many more campaigns in the war. They were highly used because of their productivity. Their first action as Confederate soldiers was uneventful. They marched ten hours from Coalsmouth to Barboursville on July 11th. On the 12th of July, they were ordered to leave without firing and marched ten hours back to Coalsmouth. During this uneventful order, the Border Rangers lost zero men.

By the 14th of July, they began to see action. They were marching the Ohio River when they discovered a Union steamboat. They hailed the boat to come to the bank; once the vessel arrived at the bank, the company seized the ship. They were able to find some swords and a few revolvers from the steamboat.

Making movements between the various states, the company saw many more battles during the time. They saw action in places such as Scary Creek and Cloyd’s Mountain, fighting their way across all four directions of the map, only to suffer their downfall near their origin. In the end, they disbanded after they were forced to surrender near Lynchburg. They fought well and hard throughout the entirety of the Civil War, but their efforts went unrewarded with the downfall of their beloved country.