A large boulder near the Chi Omega Fountain on the University of Kansas campus features a plaque and medallion commemorating the settlers who embarked westward on the Oregon Trail seeking lands and a new life. The trail began in Independence, Missouri, and passed through part of what is now the campus. The medallion depicts a family riding a wagon pulled by oxen. Hundreds of thousands of people used the trail from the 1830s through the late 1860s. Upon the completion of the transcontinental railroad in 1869, the use of the trail declined.

The California and Oregon Trails Memorial 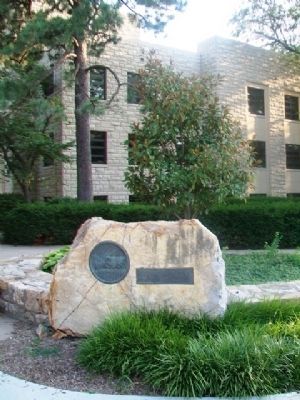