Built in 1928 and formerly known as the 6th Street Bridge, the span’s name was changed to honor Pittsburgh Pirates hall of famer, Roberto Clemente, in 1998. It bridges the Allegheny River and connects the downtown’s 6th Street to the North Shore’s Federal Street just to the east of PNC Park. The Clemente Bridge was added to the National Register of Historic Places in 1986 primarily for its unique, self-anchored eye-bar suspension design. It is also one of a trio of nearly identical Pittsburgh bridges known as the “Three Sisters,” the other two being the Andy Warhol and Rachel Carson Bridges, both of which sit just upriver from the Clemente Bridge. 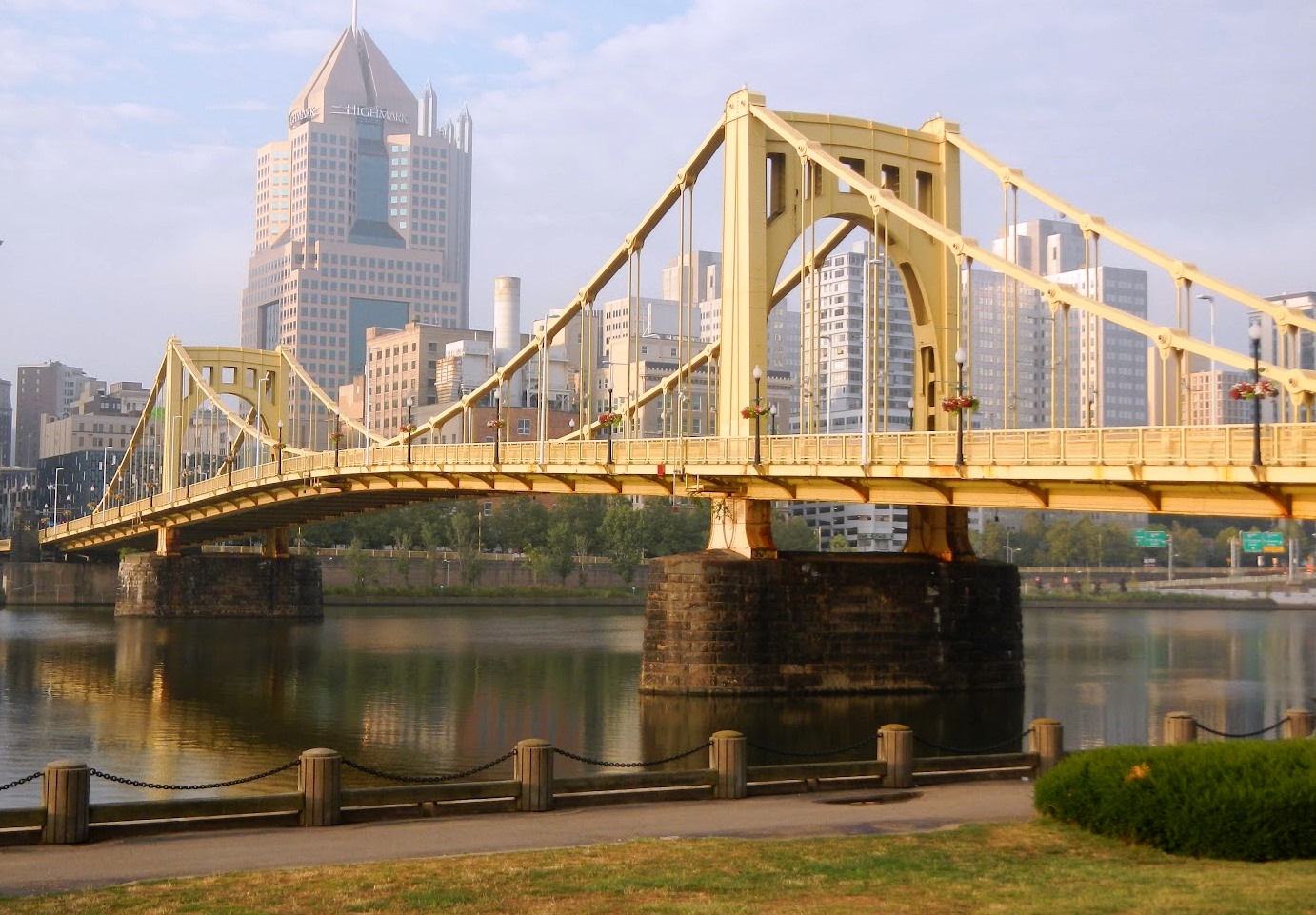 The Clemente Bridge is reflected in the waters of the Allegheny River. Architectural lighting was added to the bridge in 2002. 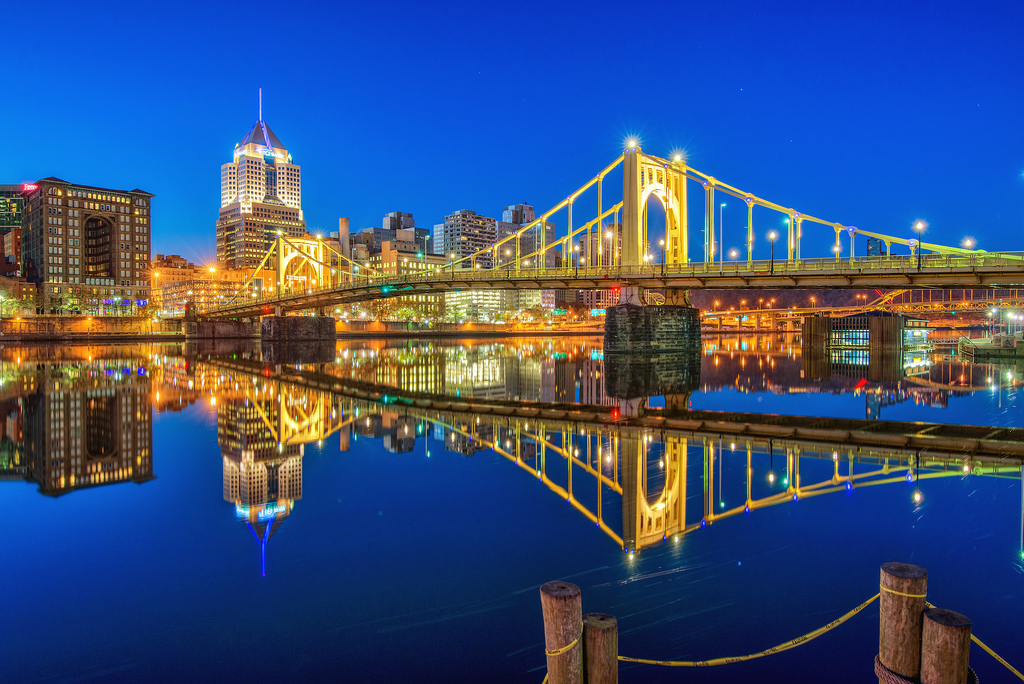 John Roebling's suspension bridge was replaced with a through truss bridge in 1892. 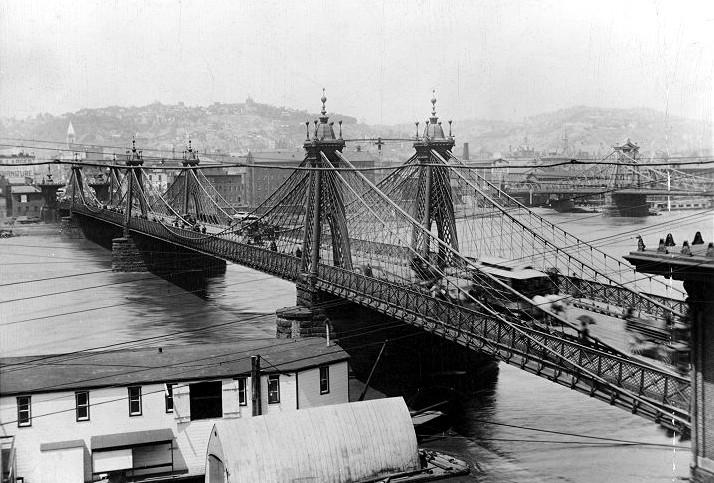 Profiles of the four bridges that have spanned the Allegheny River since 1819. 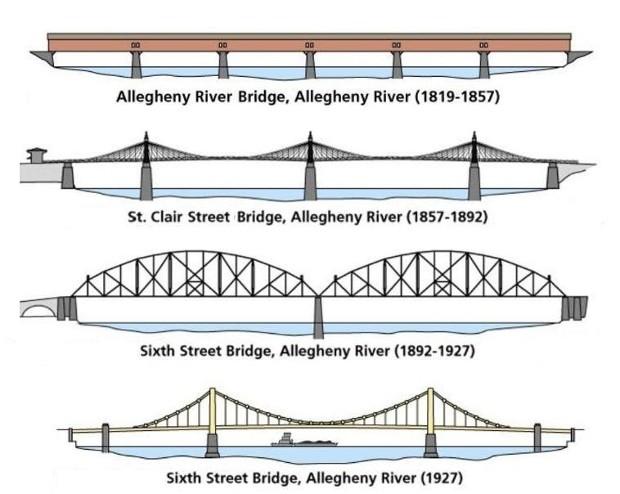 A close up of the eye-bars that support the bridge deck. 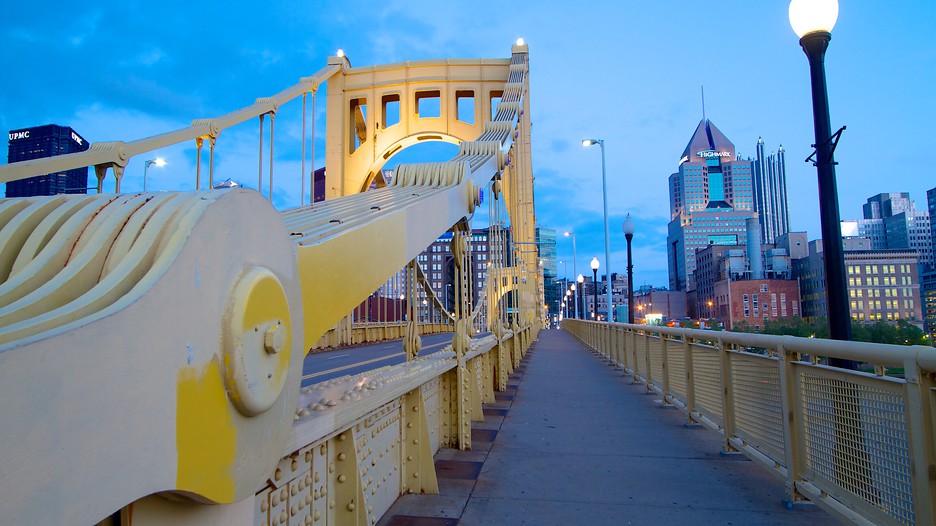 Prior to the construction of the Roberto Clemente Bridge, three other bridges crossed the Allegheny River at the same spot.  The first was a covered, wooden toll bridge that was designed by Louis Wernwag and built in 1819.  It was known as the St. Clair Bridge as that was what 6th Street was referred to back then.  Forty years later it was replaced with a John Roebling designed wire suspension bridge in 1859.  The designer of the Brooklyn Bridge built three bridges in Pittsburgh, with this one being his last.  By 1892 it had become obsolete as it was too low to the water’s surface and could not safely handle the increasing weight of the traffic crossing upon it, to include the new electric street trolleys.  Subsequently, it was replaced the same year.

The third bridge at this location was a Theodore Cooper designed through truss bridge built by the Union Bridge Company.  This bridge was renamed the 6th Street Bridge in 1908 when Allegheny City was annexed and incorporated into the city of Pittsburgh.  When this bridge was dismantled in 1927, its main span was lowered onto barges and floated down the Allegheny and Ohio Rivers to bridge the gap between the nearby Neville Island and the town of Coraopolis where it remained until 1994.

The American Bridge Company of New York was then tasked with building a new span in 1927-28.  They came up with a unique design due to the fact that the city desired a suspension bridge but the site did not allow for the usual land-based anchorages for the bridge’s wires.  Instead, they built two, 78-foot towers and replaced the typical suspension wires with an eye-bar chain and then suspended the bridge deck with additional, vertical eye-bars.  It went through a major renovation in 1995 and when the Pirates’ sold the naming rights to their new ball park to PNC Bank, rather than name it after Clemente, the bridge was renamed after the famous Pirate in a compromise gesture in 1998.  The bridge is closed to vehicular traffic during weekend (Fri-Sun) Pirates' and Steelers' home games.

Roberto Clemente was much more than a baseball great that played for 18 seasons and collected exactly 3,000 hits.  He was a gracious representative of the game who was proud of his Latin American heritage.  He was also involved in numerous local and international charities to which he devoted both time and money.  He tragically died on New Year’s Eve, 1972 when the plane he was escorting to deliver relief supplies to earthquake victims in Nicaragua crashed into the sea just after take-off.