Amsterdam News issued its first publication on December 4, 1909 from the home of founder James H. Anderson. One of only approximately fifty Black newspapers circulating the United States at this time, the newspaper became largely successful amongst the Black population during The Great Migration. It was during this time that the paper relocated to Harlem, where proximity allowed better coverage of increased tensions which arose between whites and Blacks during this time. The contributions Amsterdam News made to The Civil Rights Movement are best evidenced by the authors which it featured, which include W.E.B. DuBois, Roy Wilkins, Adam Clayton Powell Jr., and Malcolm X. Today, The Amsterdam News remains committed to seeking increased equality between minority and majority within American society. 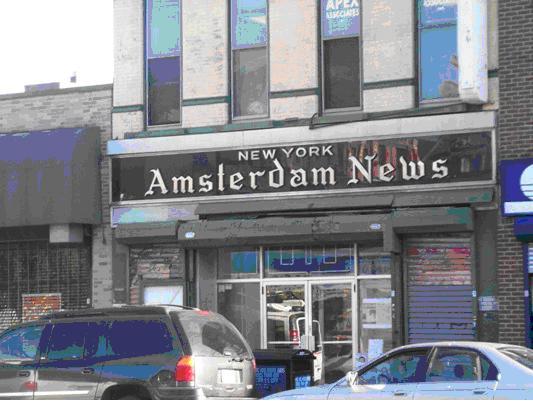 The Amsterdam News was founded by James H. Anderson, who issued its first publication on December 4, 1909. Named after the street on which Anderson lived, these first copies sold for just two cents and largely focused on day to day Black life. This included marriages, funerals, birthdays, and more, which were limited to the immediate community. One of only an approximate fifty Black newspapers at this time, the paper nonetheless remained integral to Black heritage and sense of pride. It was the 1935 purchase of the newspaper by Dr. Cielan Bethan Powell and Dr. Phillip M.H. Savory of the Powell Savory Company which brought the paper national acclaim.

Under the capable leadership of Powell and Savory, the newspaper was able to capitalize upon increased tensions between Blacks and whites which resulted from The Great Migration. Reporting on matters like The Civil Rights Movement, The Freedom Riders, and The Montgomery Bus Boycott, The Amsterdam News was able to successfully cater to an audience hungry for political change. Not only this, but the paper was also able to add the voices of leading activists and civil rights leaders during this era, including but not limited to W.E.B. Dubois, Roy Wilkins, Adam Clayton Powell Jr., and Malcolm X. Most famously featuring Dubois' columnn "God's Angry Man", first published in 1958, the newspaper was increasingly able to capture the frustration of a Black population hungry for change. The inclusion of women amongst their ranks strengthened their cry for inclusion, with Marvel Cooke becoming the first woman hired in 1928. Cooke later went on to become the first Black woman hired at a white, mainstream newspaper upon her employment at The Daily Compass some years later.

Today, The Amsterdam News is no longer one of just fifty Black newspapers which circulate the United States, demonstrating the immense success the paper achieved in illustrating the necessity of a forum designated specifically to the plight of a people who are still marginalized by American society to this day. The newspaper has become a voice to all these marginalized peoples, as it states on their official website, "...remains keenly aware and respectful of the fact that it serves an increasingly multi-racial and multi-ethnic community in New York and beyond." It is in this way that The Amsterdam News remains relevant and powerful for the minority groups within America, as it has adopted "The New Black View" with the mission of seeking to adapt to the needs of a changing people.

"About Us." The Amsterdam News. http://amsterdamnews.com/about/.