Fort Jackson was built in order to protect Louisianans from a possible attack by the Spanish in lower Mississippi River delta. Fort St. Phillip was the lone fort that rested along the Louisianan border. After a British attack in 1815, against Fort St. Phillip, General Andrew Jackson emphasized in a report to Secretary of War J.C. Calhoun that additional forts were needed in the area largely to protect from a possible Spanish attack. Work on Fort Jackson began in 1822. The fort was named after Andrew Jackson and construction was completed by 1832. A small military group remained in the fort until February 9, 1842, when President John Tyler issued an executive order declaring Fort Jackson a military reservation. As the threat of the Mexican War grew it was extremely important that both Fort St. Phillip and Fort Jackson be prepared for an emergency. Fort Jackson and Fort St. Phillip were imperative for the defense of New Orleans and once they were surrendered during the Civil War control over the mouth of the Mississippi was in Federal control. The land that both forts rested on was ceded to the national government on June 1, 1846, by Governor Isaac Johnson. Neither fort was needed during the Mexican War. Each fort was manned with very few men until the State of Louisiana seized power on January 8, 1861. When the Civil War ended Fort Jackson was used as a prison and later transformed into a training base. As time passed by Fort Jackson was gradually abandoned. It was not until the Spanish-American War that Fort Jackson was modernized when two coastal guns were installed. Fort Jackson was once again used as a training base with the outbreak of World War I. However when the war was over the government declared both Fort St. Phillip and Fort Jackson surplus property and sold both locations. Mr. and Mrs. H.J. Harvey purchased Fort Jackson on November 9, 1927. They donated the land in 1960 to the Parish of Plaquemines in order to preserve and renovate the Fort and surrounding grounds. Both Fort Jackson and Fort St. Phillip were deemed national historic monuments in 1960 by the Department of Interior. Soon after that Judge L.H. Perez began restoring the Fort and the eighty two acres of land that it was situated on. 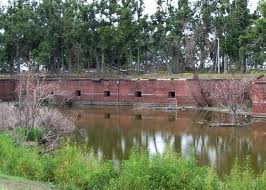