This majestic government building has also been known as Minneapolis City Hall. It also serves as the county courthouse. The Minneapolis architecture firm of Long and Kees designed the building. It was built at a cost of $3,500,000 between 1889 and 1905. The clock was added in 1916 and was said to be the largest timepiece in the world. The building was added to the National Register of Historic Places in 1974.

The Minneapolis Municipal Building, also known as City Hall, is on the National Register of Historic Places. It takes up an entire city block. 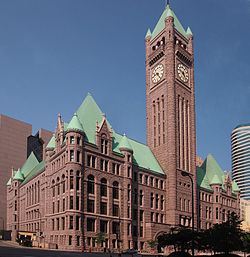 The exterior is rusticated pink Ortonville granite. It occupies an entire city block. The 5-story building is 100-feet tall. It features Romanesque elements such as arched entryways, turrets and steep roof pavilions. The interior is highlighted my marble walls, a grand ceremonial staircase and a large statue of the “Father of the Waters.” Another notable characteristic of the building is that it was engineered so that the floors could be remodeled independently.

As the city grew and more services were needed, the building needed to grow as well. A 4-story addition was completed in 1949 closing off the once open center court. The original terra cotta roof gave way to sheet copper in 1950. The rotunda was extensively refurbished in 2002. It has had numerous other upgrades through the years.

The building is operated by the Municipal Building Commission. Hennepin County moved most of its operations to a new building across the street in 1975. Today, the building is occupied by 60 percent city departments and 40 percent county and district courts. Visitors can enjoy self-guided tours and listen to one of many scheduled bell concerts that take place from noon to 1 p.m. on select days. The building is also a popular spot for weddings.