Placed along I-70 west of Topeka, this marker claims that the local highway was the first section of the interstate highway to open. In June, 1956 President Dwight Eisenhower signed the Federal-Aid Highway Act of 1956, initiating a 10-year massive highway construction project. Congress allocated $25 billion to construct 41,000 miles of interstate highways (the federal government paid 90% of costs and states were required to pay the remaining 10%). This section opened in November of that year. Though the cost and scope of the project was enormous and costly, the highway system has been a tremendous asset to the country. The interstate highway has become an everyday necessity for American citizens, it has provided numerous positive benefits for the country. It is important to understand the history of the interstate system as well as the conflicting beliefs about its creation. Even though the interstate has provided a plethora of convenient high speed roads to help navigate the country with ease, it is important to also focus on the damage that the interstate caused to some communities.

The marker indicating the location where the first section of the interstate highway was built. 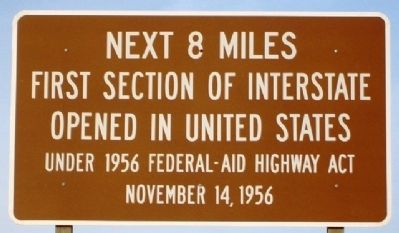 This is an unfinished section of Highway 520. Production of the interstate was stopped due to activists during the 1970's. 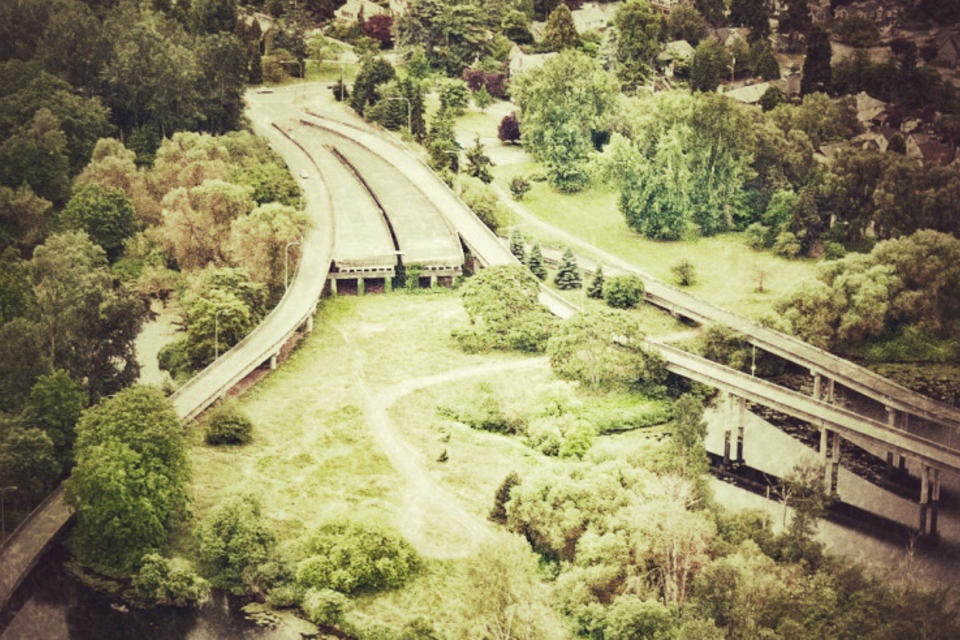 The United States Interstate is a sprawling system of high speed, multi-lane roads that allows fast and convenient access to American citizens across the country. It allows Americans the ability to travel to work outside of what was thought possible at a time before highways, as well as providing a more well oiled system of transportation that reduces traffic congestion and lowers the amount of vehicle related incidents. The interstate also provides businesses the ability to ship their products in another fashion, dedicated trucking routes play a significant role in the distribution of goods across the country. In addition to the conveniences it provides to Americans, it also has a role in the protection of the United States. After World War Two, General Dwight D. Eisenhower realized the potential of having a competent system of high speed routes that flowed throughout a country. The German made Autobahn demonstrated the efficiency in which the German Army was able to mobilize both troops and armored units in a hurry. Eisenhower decided that this was a system that the United States needed to have. In the event of an invading force or nuclear attack, the interstate would be able to provide a quick means of evacuations for civilians in major cities that would be targeted. The interstate also provides versatility for our military, in the event of a catastrophic event where the military needs to be mobilized they would be able to deploy units from bases in an efficient and orderly way.

I-70 holds a special spot within the interstate system, specifically the 8-mile strip between Valencia and Maple Hill due in part for two reasons. The first is that Dwight D. Eisenhower was raised from a young age in the state of Kansas and it is considered his hometown. The second reason I-70 is significant is because the 8-mile stretch between Valencia and Maple Hill was the first section of interstate to be opened to the public in the entire country. This is a major accomplishment due to the success that has followed the construction of the interstate system, it is hard to think of going about our daily lives without the use of the interstate highway system.

Although the interstate system has provided many perks that are now a hardwired part of today's society, the interstate was not welcomed by all. The high speed roads of the interstate system required a specific way in which they needed to be built in order to provide safe driving conditions at such high speeds. The roads had to be gradual, which means that the engineers and construction crews had limited flexibility in how they laid the roads. In order for the interstate system to be successful the roads had to connect with major cities, which meant that they would have limited empty space to construct the large roads around populated areas. Many people eventually became displaced because of the construction of the roads, not because they were evicted, but because no one wanted to live underneath an overpass or have a high speed road in their backyard. Overtime, the people that lived in the path of the ever growing interstate system found that their communities began to suffer. Many of these communities have still not recovered from this and some places are nearly abandoned due to a drop in the value of homes near the interstate. This unrest led to the Highway Revolts.

The Highway Revolts were in response to the negative effects that the interstate brought with it to people, communities, and local economies. 25 states took part in the revolts and as a result there are many sections of the interstate that seem to abruptly end, also know as the "roads to nowhere". There are several places around the United States where these roads and overpasses can be found as a result of the revolts. Another factor that played into the highway revolts was the effect that the construction of these roads had on the environment. There was not much thought put into the impact on the environment at the time of construction but in the 1970's when environmentalists became a more prevalent party, attention was turned to the environmental mark they left behind.

"History of the Interstate Highway System." U.S. Department of Transportation. Accessed May 4, 2017. https://www.fhwa.dot.gov/interstate/history.cfm.