The Battle of Green Spring was the largest open-field battle in the state of Virginia during the American Revolution. In 1781, British forces under Earl Charles Cornwallis greatly outnumbered the American force under General "Mad" Anthony Wayne and the Marquis de Lafayette. Cornwallis had laid out an elaborate trap, but Wayne's maneuvers gave American troops time to make a successful escape. The battle one of the last battles in Virginia and helped to prevent a potential catastrophe for rebel forces in the region.

Historical marker for the Battle of Green Spring by Laura Troy on hmdb.org (reproduced under Fair Use). 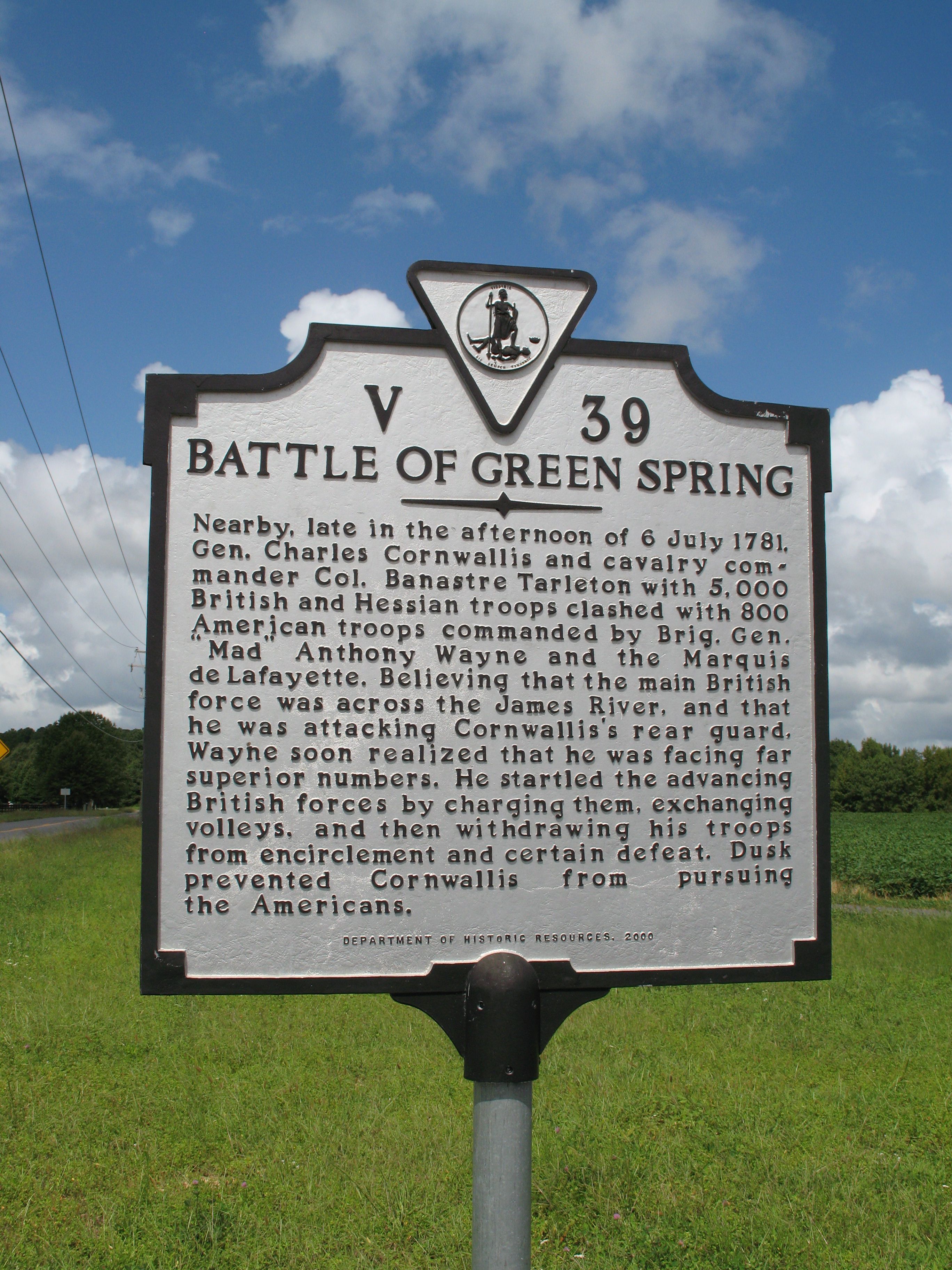 Informational placard at the site, courtesy of RevolutionaryWar.us (reproduced under Fair Use) 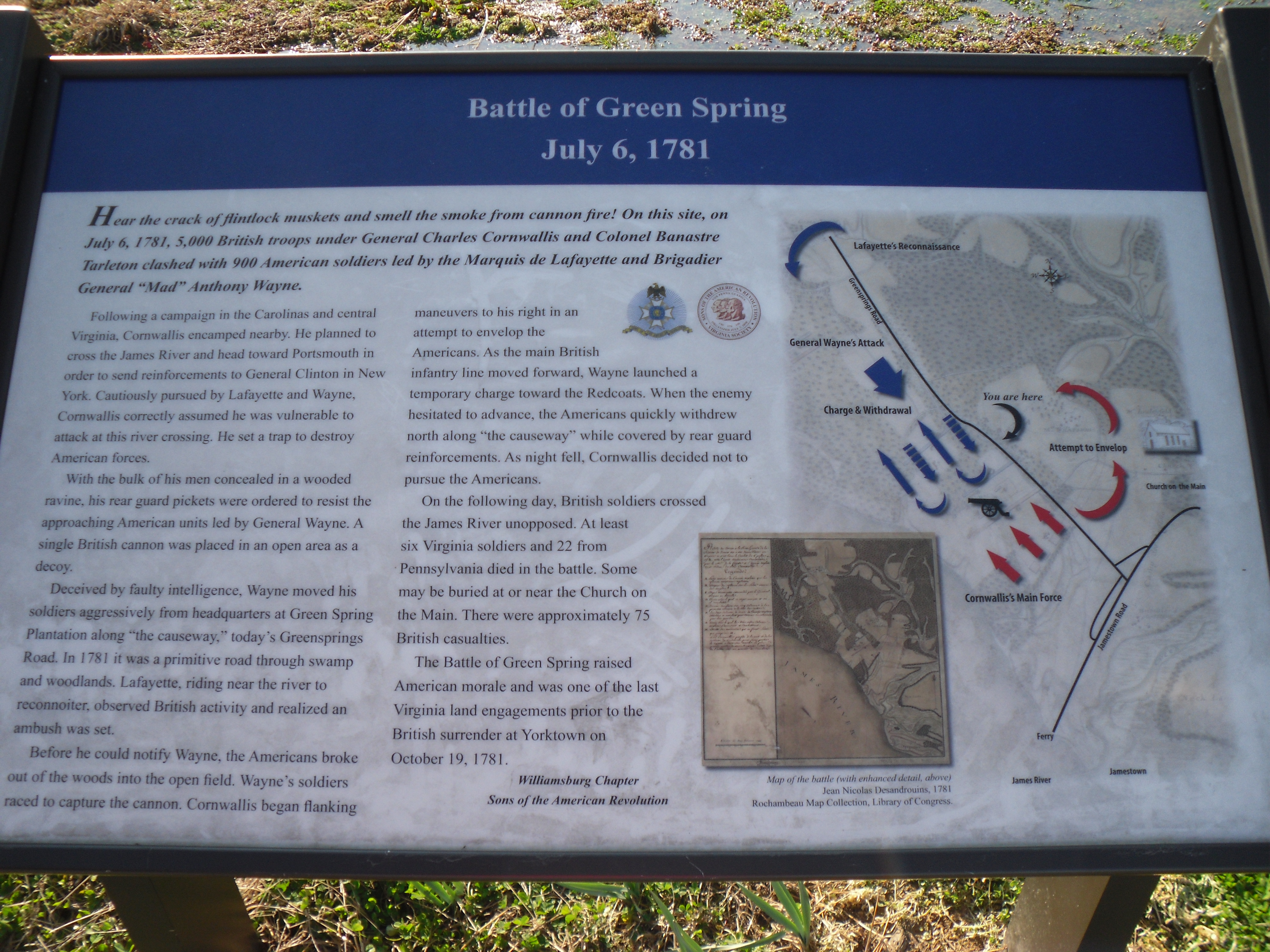 The Battle of Green Spring was the largest open-field battle in the state of Virginia during the fist stages of the American Revolution. The battle's name references the historic Green Spring Plantation near the site of the conflict. The battle began with clever plan by British General Earl Charles Cornwallis to try and trap the rebel and French forces led by the Marquis de Lafayette. In late June 1781, Cornwallis moved his forces to Williamsburg and was given orders to bring the bulk of his force of 6,000 men to Portsmouth while diverting the rest back to New York City. With his numbers recently bolstered by reinforcements, Lafayette and his force of around 4,000 followed close behind when Cornwallis left Williamsburg for Jamestown on July 4. Cornwallis crossed the James River and reached Portsmouth, leading Lafayette to believe he could effect a strategic attack on the rear guard while most of the troops were tied up in crossing.

Armies were vulnerable while crossing rivers, so Cornwallis anticipated that Lafayette might attack him and concocted an elaborate trap to the rebel/French troops. Cornwallis sent his baggage train and the Queen’s Riders ahead and then concealed his main force on both sides of a narrow causeway that provided access to the river. He also sent “deserters” who informed Lafayette that most of the crossing had already been achieved, with only the rear guard remaining. Cornwallis also used a contingent of German mercenaries and some members of the British Legion to give the appearance of that ‘rear guard’. These men were told to fiercely hold the line and resist any advance as much as was possible.

When General Wayne brought Lafayette’s advance company of about 500 men toward the British position on July 6, he noted the British ‘rear guard’ and when Lafayette and the main force caught up, they met at the Green Spring Plantation and decided to carry out the planned attack. Some light skirmishing took place throughout the morning but by early afternoon, Lafayette had begun to suspect something wasn’t right. He sent forward two Pennsylvania Continental battalions and a single light infantry battalion, but held two more light infantry battalions in reserve. Those three companies joined Wayne’s advance company so that the force attacking the ‘rear guard’ numbered somewhere around 900 men.

Wayne’s men and the British ‘rear guard’ engaged in battle for several hours with the British forces in a slow retreat, intending to exhaust Wayne’s forces in the process. Wayne and his men did well, his riflemen being particularly effective in that engagement, but their success was swiftly outmatched when they reached the “abandoned” gun Cornwallis had left in the road as a signal marker for his trap. American seizure of the gun triggered Cornwallis’ trap and the British closed in on Wayne’s force from both sides. From his vantage point of the battle, Lafayette had seen the trap about to unfold, but could not reach Wayne in time to prevent engagement. He sent more troops forward in an effort to keep the trap from closing entirely and surrounding Wayne’s forces in a maneuver that – if successful – would surely end in a brutal slaughter.

The sudden charge of British troops from both sides created some understandable confusion among Wayne’s men and he was concerned that a retreat in that moment would turn into unproductive and dangerous chaos. In a bold and brazen move, he ordered his guns to fire grape shot and then his men to charge the British forces – who drastically outnumbered them – with bayonets fixed. It was a move considered insane by many of his contemporaries after the fact, but Wayne’s charge worked. It stalled the British advance long enough for Lafayette and his men to make it close enough to cover a more organized retreat. Lafayette’s horse was shot out from under him at one point, but he and Wayne and the bulk of their force survived. Cornwallis did not pursue and instead continued on toward Portsmouth. It was the last major land battle of the Virginia campaign before Yorktown. Lafayette suffered 150 casualties; Cornwallis sustained 75.

More recently, when the owners of the land on which the battlefield site rests had to sell it, local community organizations raised money so that the site could remain intact for future generations. In 2006 – at the 125th anniversary of the battle – groups of Civil War reenactors held a special Revolutionary event in which they recreated the Battle of Green Spring on the land where it originally took place, with all proceeds going toward the purchase of the land. Activities and education surrounding this site and the nearby Green Spring Plantation continue.