The Bowman and The Spearman 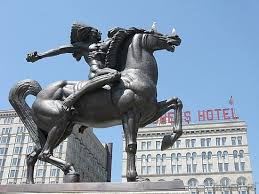 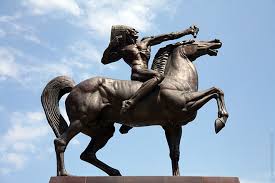 Both men in the sculptures appear to be battling the other, although neither are actually holding a weapon. There is an ongoing myth that the weapons were once attached to the structures, but had been removed. This is untrue. Mestrovic left the weapons from the structure to make the viewer use his or her imagination to envision the bow and arrow and the spear being thrown.

Mestrovic wanted these sculptures to be a representation of Native Americans, their struggle, and their ability to persevere. From the detail in the pieces, you can see how strong and fierce both men were. He wanted to capture the energy and passion that the Native Americans had. He also wanted it to be a reminded of their fight to settle America.

Ivan Mestrovic was born in Croatia and later became a citizen of the United States in 1954, prior to his death in 1962. He was a very well known and respected sculpture. Mestrovic was the first person to obtain a “One Man Show” at the Metropolitan Museum of Art in NYC. He worked most often with bronze, wood, and marble and was strongly influenced by Greek styles.