Mount Holyoke, created as Mount Holyoke Female Seminary, was the first women’s college created in a time where women were most unlikely to get accepted into college, much less Ivy League schools. Educator Mary Lyon founded Mount Holyoke Female Seminary in 1837. Her actions led to her dream of an institution of high academic standards for women coming true. Mary Lyons challenge to women, “Go forward, attempt great things, accomplish great things.”, has inspired many. The creation led to a change in higher education forever.

An aerial view of the school.

The gate entrance to the school. 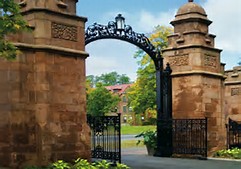 A picture of the first building.

Mary Lyon, born in Massachusetts, lived from 1797 to 1849. Mary was raised by her mother, Jemina, after her father died on a 100-acre farm in Buckland, Massachusetts. She was one of seven children. She began school at 4 and continued ten months out of the year until age 13. At age 13, her mother remarried and left leaving Mary and her brother behind. When she was 17, she was offered her first teaching job. While teaching required no formal education, she wanted to continue.

Most schools of the time were unaffordable for a person of modest means and women were only taught skills like needlework and drawing in college. By cashing in a part of her inheritance, being frugal, and still teaching she could go to school to continue her education. She developed a personal philosophy on education while teaching and managing different schools. After being an assistant principle at Ipswich Female Seminary, she decided to build a higher education institution for women that would have a challenging curriculum. It took her three years of collecting funds through donations to have enough money. She oversaw the foundation of the school from the ground up. She managed the location, building, equipment, curriculum, and the hiring of teachers.

The creation of the Mount Holyoke Female Seminary was a leap for women’s advancements. Another educator had stated, "the rigors of Latin, Greek and calculus might do irreparable damage to the future mothers of the nation." Lyon included a vigorous course of study beyond what was accepted. The school served as a model for many other institutions including the other Seven Sisters colleges. She made serious entrance requirements to make sure the women were serious, but she made it affordable by making the tuition half to a third of what other colleges were. To be allowed to attend, there were oral entrance examinations in grammar, math, U.S. history, and geography. The first class included 80 women who all lived in one building changing roommates once a month.

The success of the college led to the creation of more women’s colleges and disproved the thought that women were unable to succeed at subjects like math and science. The success also showed that women were just as capable as men. More women than men are now enrolled in college. Mount Holyoke is still widely successful today having 48 majors, over 2,000 students, and remaining a leading institution. When Mary Lyon died in 1849 she was buried on the campus, but her legacy lives on through the college.