The USS Cairo was one of the very first ironclad ships ever built. Constructed in 1861, she joined the Union Army's flotilla and patrolled the Mississippi and Ohio Rivers. While working to clear underwater mines in the Yazoo River, Confederate sailors detonated what was to be the first electrically-triggered torpedo beneath this Union vessel. The detonation breached the Cairo's hull and sent the vessel to the bottom of the river where she stayed for over a century. After the vessel was located and brought to the surface following a decade of attempts that began in the 1950s, the National Park Service accepted the donation of the ironclad, preserved the ship, and created this museum to house the vessel and related exhibits that has been open to the public since 1985.

The USS Cairo Museum includes the recovered hull of the Cairo and many exhibits related to naval warfare in the 19th century. 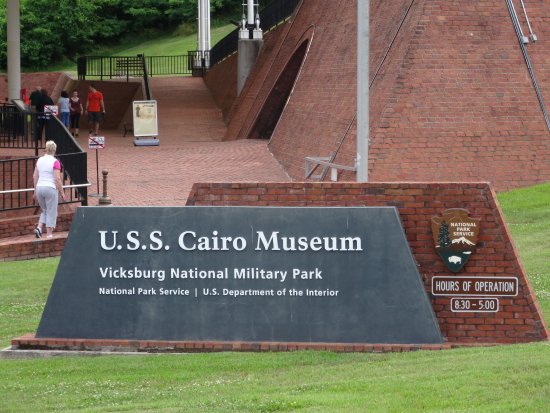 The USS Cairo was armed with thirteen guns and could propel a 32 pound cannonball up to a mile. Utilizing steam power produced by five boilers, the Cairo could travel up to six knots and used almost one ton of coal per hour. Her paddle wheel was protected from being hit by enemy fire with thick casements and the individual paddles could be replaced when worn or damaged. Inside the metal exterior of the hull, the Cairo had a wooden interior similar to other vessels of the era. The major drawback to the design of the boat was the hull's vulnerability to strong concussive force. There was no way to isolate any damaged section, and a single breach would result in the vessel filling rapidly with water and sinking.

Ironclad warships were an important counter to the development of the exploding artillery shell in the 1820s. These shells could easily penetrate a simple wooden hull and produced much more damage than a simple cannonball. Ironclad ships quickly became the most advanced fighting vessels in the Civil War and forever changed nautical warfare. Armed with exploding shells, the ironclad was a formidable force on the water. The ironclads were not that expensive to build and could be fueled by wood should coal be unavailable. The North had more iron and could build these boats thicker than the South could.

When she was built in 1861, the USS Cairo weighed five hundred and twelve tons and was the first ship to be denoted as a "City" class ship because she was built in Mound City, Illinois. She was named in honor of the nearby river city of Cairo. Commissioned in 1862, she joined the Army's Western Gunboat Flotilla and saw action at Fort Pillow in May of that year. She also saw combat with Confederate ships near Memphis in June, 1862. Afterward, she was sent to the Mississippi to patrol that river and smaller adjoining rivers along its great length. She was transferred to the Navy in October.

The Cairo's propulsion was provided by a wheel set inside the ship for the greatest protection from enemy guns. However, this did not mean that the vessel was unsinkable. While on a mission to clear underwater mines the Confederates had placed in the Yazoo River near Vicksburg, the Cairo was damaged by several explosions set off by an electrically-charged detonator. The inherent design flaw of the hull not being able to be sealed off in sections to control flooding resulted in the quick sinking of the vessel to the bottom of the muddy Yazoo. No one was killed, but the ship was lost and remained untouched for over a century until its discovery in the 1950s. Salvage operation attempts were made to raise the ship whole, but this feat could not be accomplished. The vessel had to be cut into three sections which were brought up to the surface separately, cleaned and stored. Congressional funds were allocated for her full restoration and display at the Vicksburg National Military Park during the 1970s. The museum opened in 1985.