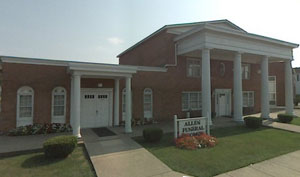 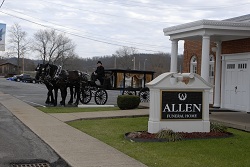 Noah Allen opened the People's Department Store in 1909 on Putnam Avenue in Hurricane, WV.  Not only did Allen sell general merchandise to the local community, he also offered services such as jewelry repair and watchmaking.  In addition to those goods and services, Allen also offered his customers caskets and casket making materials.  During the early 20th century it was customary for the family of the deceased to build their own caskets and handle the funeral arrangements.

Realizing a greater need in the growing community of Hurricane, Allen established the Allen Funeral Home in 1916 to better serve local families.  It was the first funeral home established in Putnam County  Along with his casket building services, Allen also orchestrated funeral and burial arrangements.  The funeral home even owned and operated a horse drawn hearse for transportation to the burial site.  As a result of the growth of the business and an increasing need in the community, Allen moved the funeral home, in 1932, from its original location on Putnam Avenue to its present day location on Main Street in Hurricane.  Allen had acquired what was then known as the Poindexter Hotel, and transformed it into what would become the funeral home it is today.

Four generations later, the Allen family still owns and operates the Allen Funeral Home on Main Street.  It currently is ran by Noah Allen's great-grandsons, Greg and Wesley Allen.  The funeral home continues to operate with the same standard and care established over 100 years ago by the original Allen.  Today the building and business serve as a reminder of the legacy of the Allen family and the services they have offered, and continue to offer the community of Hurricane.

Neal, Amy. "Glimpse into Hurricane's past to be shared during tour." The Charleston Gazette Metro West 10 Aug. 1988: 1A . Print.