In ancient history, Seip Earthworks was once an enormous earthwork complex. Today it is estimated that only 10% of its original area has been maintained or reconstructed. Like so many other ancient earthworks in the United States, its partial destruction is mostly due to the plow and agricultural progress. It is an example of a “tripartite,” meaning it is made up of three geometric shapes that have combined portions.

Picture showing what remains today of the original earthwork. 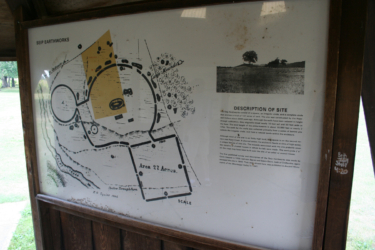 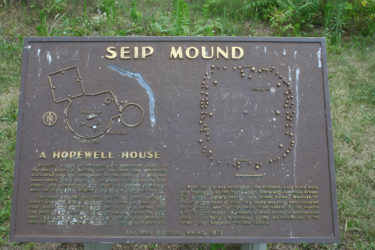 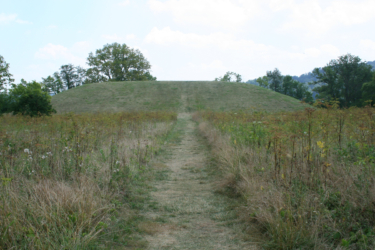 The earthwork’s embankments are formed using a small circle with a gateway to a large contoured square with a semicircle protrusion on one side with gateways to a lower square. Altogether, the embankments enclose 121 acres, with 27 of them located in the square. The square section was made of approximately 10,000 feet of wall that was up to 10 feet in height. There were several mounds within the main enclosure ranging in size. The largest one is in the center and has an oblong or oval shape reminiscent of the “egg” located at Serpent Mound. This particular mound is approximately 240 feet long, 160 feet wide and averaging 30 feet in height. It has been partially reconstructed due to time, the plow and excavation.

The Seip-Pricer Mound is the largest and most recognizable feature of the park. This mound is believed to be a burial mound and was first excavated from 1925 to 1928. The Ohio Historical Society was responsible for the excavation, having been given control over the land. The mound was found to contain a total of 122 buried and cremated human remains, along with many artifacts. Often called grave goods, artifacts found included cloth made from milkweed fiber featuring a geometrical circle shaped pattern that was preserved between copper breastplates. There was also mica found, which is a natural sheet silicate mineral often used for decoration due to its glittery or colorful hues.

These artifacts are further examples of resources acquired using trade routes often utilized by the Hopewell Culture that was most likely responsible for its construction. The mica was native to the Carolinas, the copper was from Isle Royale (an island in Lake Superior), there were also Tennessee River Valley effigy pipes found along with thousands of freshwater pearls. All of these leave archaeological clues as to who built the mounds and embankments.

The earthworks were surveyed in 1846 at the request of the Smithsonian Institute. At the time, they were located on the estate of John Woodbridge, Esq., of Chillicothe, Ohio. The site was later acquired by the Ohio State Archaeological Society, which became the Ohio Historical Society and is now known as the Ohio History Connection (OHC). This organization had been partnered with the National Park Service as co-owners and co-managers from 1992 to 2014. In 2014 the site was deeded to the National Park Service, becoming part of the Hopewell Culture National Historical Park (NHP). Today, the area is open to the public as an educational park.

The park grounds at Mound City Group, Hopewell Mound Group and Seip Earthworks are open every day of the year during daylight hours.