Over the course of two days in early August 1832, the Battle of Bad Axe - known as the Bad Axe Massacre by historians since the 1850s - took place near this location. This devastating massacre of Native Americans concluded a series of atrocities and battles known collectively as the Black Hawk War. This massacre, like the Black Hawk War itself, concluded with the elimination of Native American control of the region which facilitated further settlement of the Michigan territory. 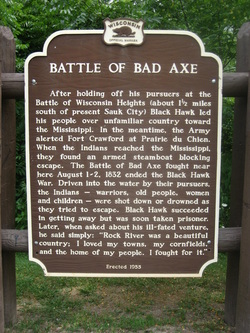 Monument near the battle site. 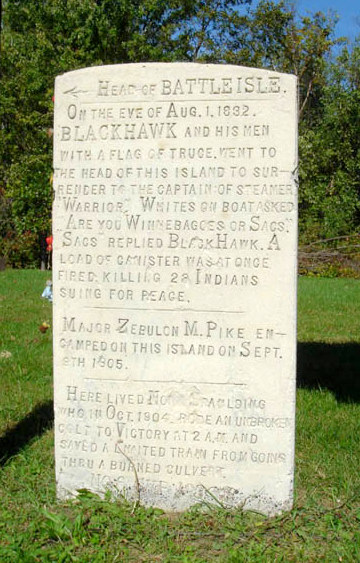 Drawing of US Lieutenant taking the injured Sauk child from his dead mother. 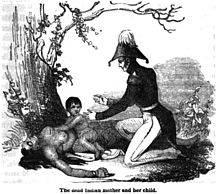 Fleeing militia after a defeat at the Battle of Wisconsin Heights, Black Hawk and his band of Sauk and Fox were faced with a decision at the shore of the Mississippi River just south of the mouth of the Bad Axe River. Some among their number wanted to make rafts and attempt to cross the river to safety. Black Hawk and White Cloud – a Sauk medicine man and leading figure alongside Black Hawk believed that their best chance of survival lay in seeking refuge among the Ho-Chunk to the north. However, the majority of their band decided that they would prefer to cross the river.

The arrival of the steamboat Warrior, commanded by Captain James Throckmorton, prevented the bulk of the band from making it across the river. Black Hawk – using a white flag frantically waved at the white officers – attempted to surrender but were misinterpreted with tragic consequences. Those among the band who survived the first shots quickly returned fire and the entire situation devolved into a heated battle which lasted several hours.

Running low on fuel and supplies, the Warrior withdrew and the militia headed to Fort Crawford to regroup. Initial reports placed American casualties at one wounded soldier and the number of dead Native Americans at 23. This includes a woman who was shot through her child’s arm. I a rare demonstration of mercy, one of the militia officers retrieved the orphaned child and amputated his arm to save his life. At the end of the first day, Black Hawk again tried to persuade the band to flee north to safety. However, only about three dozen people left with him.

The next day, the pursuing militia led by General Atkinson rose before sunrise and ran into rear scouts for the Sauk and Fox encampments left behind.  Those scouts tried to lead the militia away from the main camp but failed to divert them. Men led by Generals Atkinson, Alexander, Dodge, Henry, and Posey surrounded the Sauk and Fox. The Warrior’s return increased the manpower and resources available to attack the Native Americans. The initial attack soon devolved into a massacre.

The soldiers attacked anyone who tried to flee, take cover, or cross the river. Women and children were not spared and at least 150 Native Americans were slaughtered out of a total number of 400 to 500. In addition, over seventy Sauk and Fox were taken as captives while the militia suffered only five killed and 19 wounded in the battle and resulting massacre.