SE corner of King and New Sts. Built in 1912, this red brick building of Gothic design with a square steepled tower at one corner housed the fire department and served as a community building, town hall, jailhouse, basketball court, sometime movie theater, and a gathering place for church suppers, bazaars, and entertainments by various religious and civic groups. After the fire company moved to a new fire house on Route 45 in 1987, the building remained empty for a time and now is privately owned. 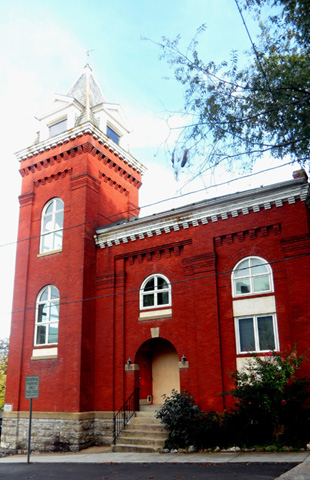 The Shepherdstown Fire Department began construction on the New Street building in 1911. In 1912 a good portion of the town was consumed by fire, but the fire department moved into their new home in 1914. In 1926, the department entered the bought their first fire suppression equipment, a Seagrave Engine.[1] The Shepherdstown Fire Department continued to modernize adding more engines and other equipment. In 1950, the Department added the Emergency Medical Service, they purchased their first ambulance in 1962. Tice Tennant was the first officer in charge of the Ambulance division.

Shepherdstown Fire Department Chief D. Lee Morgan was elected in 1960 and remained until 1998. While Chief Lee saw the modern era of the Shepherdstown Fire Department. The department continued to grow as the community and area they served enlarged, they had more “runs and equipment. In 1966, “there were 102 fire calls, and 127 ambulance calls.”[2] In 1989, the Fire Department moved to their current location vacating the New Street building. The building was vacant for a while, before becoming a private residence, today it has been renovated for two apartments.[3]