New Street United Methodist Church is located on the SW corner of New and Church Sts. 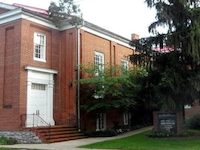 The Methodist Church in Shepherdstown began in 1776, when Freeborn Garretson (a Methodist preacher) spent some days in Shepherdstown. They became a regular appointment for the Berkley Circuit. The Jefferson Circuit started in 1820. The first church building was on Church Street between the current Catholic and Methodist Churches. This building was burned down in a fire on March 17, 1853, that started on Washington and Church Street and swept across the street to the Church. There was no fire truck, so the bucket brigade passed buckets of water. They couldn’t save the Church.

The Churches were united in 1940. Upon the union of the Churches, the Main Street Church was sold to the Men’s Club for a community building, and the New Street Church was re-designated as the sanctuary of the church. Many other congregations have been incorporated into the Shepherdstown Charge. In 1959, the Shepherdstown Church was made its own station because of the size of the Church. In 1969, the Church changed again to unite with the Evangelical United Brethren to form the United Methodist Church.