Fort Fetterman was a wooden fort constructed in 1867 by the United States Army on the Great Plains frontier in Dakota Territory, approximately 11 miles northwest of present-day Douglas, Wyoming. The fort was located high on the bluffs south of the North Platte River. Although never the site of any major battle, the fort served as a major supply and logistics base and the starting point for many military expeditions against area Native American tribes. The fort's primary mission was to demonstrate US interests in controlling this section of the country and to protect pioneers on the Bozeman Trail. The fort is listed on the National Register of Historic Places. 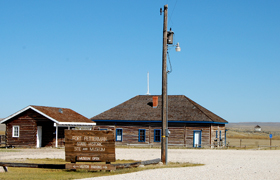 A historical marker near the side of the road tells the history of the fort. 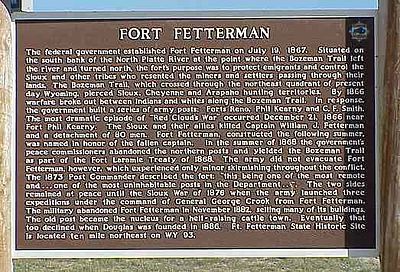 Fort Fetterman was established on July 19, 1867, by Companies A, C, H, and I of the 4th U.S. Infantry under the command of Major William E. Dye, and was named in honor of Captain William Fetterman who was killed in battle near Fort Phil Kearny on December 21, 1866. The fort was deemed necessary as pioneers and businesses pushed frontier along the line of the Union Pacific Railroad during its construction, which was completed in 1869 when it met the Central Pacific Railroad line in Promontory, Utah. This fort was built as a major supply point for the army's operations in the region.

The fort included quarters and supplies for three hundred men and their horses and mule wagons. There were also buildings to support laborers such as Blacksmiths and carpenters. While one might assume that the fort's residents were all male, there was a separate quarters built to accommodate "laundresses."

With the completion of Fort Fetterman, Fort Caspar was abandoned and its garrison moved into the new fort in August. As it was on the south side of the Platte, Fort Fetterman was excluded from the provisions of the 1868 Treaty of Fort Larmie, which resulted in the abandonment of all forts further to the north: forts Reno, Phil Kearny, and C.F. Smith). Thus, Fort Fetterman became the northernmost military post in eastern Wyoming. It was important to the protection of the Bozeman Trail and other routes for settlers.

With its remote location, the post was not considered a desirable place to be stationed. Desertions were frequent, and the winters long and hard. Supplies had to be brought in by wagon from Fort Laramie to the southeast or from Medicine Bow Station on the railroad. Soldiers had to carry water up the steep bluffs from the river or nearby creek. The soil proved to be ineffective for sustaining gardens, so fresh vegetables were not available.

In 1876, during the Black Hills War with the Lakota, Cheyenne, and Arapaho tribes, the monotony of garrison duty at Fetterman was broken by a series of major military expeditions that set out from the fort. The Big Horn Expedition, which included three of the post's four companies under the command of Colonel Joseph J Reynolds, culminated in a defeat at the Battle of Powder River in March. The Yellowstone Expedition led by Brigadier General George Crook engaged in the Battle of Rosebud in June, and the Powder River Expedition under Colonel Ranald S Mackenzie destroyed a Cheyenne village in November during the Dull Knife Fight. Fort Fetterman remained active until 1882, when it was abandoned by the Army as the Indian Wars had subsided.

A small community (Fetterman City) was started around the empty fort by Charles Henry King and others as an outfitting point for area ranchers and for wagon trains. When the town of Douglas was established eleven miles away in 1886, Fetterman City rapidly declined.