This historic gristmill was built in the late 19th century and added to the National Register of Historic Places in 1987. It sits on the east bank of what was called Sinking Creek, now called Ten Mile Creek. The mill served farmers in the Ebenezer Community for roughly 150 years by grinding corn and wheat into meal that could easily be shipped to area communities. The mill was later modified, converting water power from the nearby stream to power saws to convert timber into lumber. The mill was damaged in a flood in 1942. But the owners chose to use this disaster to update the old mill, while still using most of the original machinery. 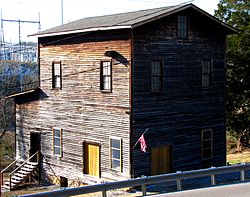 Before the 1880s, Knox County's agricultural economy was closely tied to the cotton industry of the south. Knox County farms shipped farm products into Alabama, first via the Tennessee River and then via the railroads. Grain and livestock were the county's main agricultural exports. Starting in the 1880s, wheat grown in the west was more competitive. Afterwards, corn became the area's main agricultural export. It was used for cornmeal, animal feed, and mash for small stills.

The Ebenezer Mill was built around 1870. It is a two-and-a-half-story structure with a one-and-a-half-story shed addition in the rear. An earlier mill, the Heiskell Mill, has long since been demolished. It was downstream from Ebenezer Mill. The Heiskell Mill was also known as the Mansion Mill, and operated in the 1830s, grinding corn for local Native American families. At that time, the land was owned by Col. Charles McClung. The first mention of the Ebenezer Mill dates to 1871. At that time Frederick Heiskell made a deed of gift to his wife and daughters on land on Sinking Creek, including land where the Ebenezer Mill sits.

The Ebenezer Mill was deeded to Samuel Atchley in 1917. It is thought that he leased and operated the mill from 1905 to 1917. Then he purchased it from the Knox County Union Roller Mill Co. Some records indicate that Atchley had rented it from Judge J. Fred Bibb. Atchley ran it until 1926, and then it stood idle until 1932. In 1942, floodwaters in Sinking Creek washed away the mill dam. In 1943, the mill operators started using a gasoline engine. They operated it until 1967. Today, it still stands, and is on private property. It retains much of its old equipment.

The mill is located on private property.