Located seventy miles northeast of Independence, Missouri, Adam-Ondi-Ahman was s short-lived settlement established by members of the Church of Jesus Christ of Ladder-Day Saints in 1838. LDS leader and prophet Joseph Smith named the settlement Adam-ondi-Ahman as a reference to his belief that this was the place where Adam and Eve were sent after being cast out of Eden. Hundreds of Mormon families settled in the area in 1838, but misunderstandings and altercations between church members and other settlers grew throughout the year, culminating in acts of violence against the newcomers by residents who feared the church members were going to seize economic and political control of the area. The LDS Church later purchased several thousand acres of land at their original settlement for the purpose of operating a historic site.

The area is now owned by the LDS Chruch and maintained as a historic site. 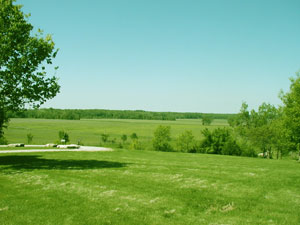 Adam-Ondi-Ahman was a settlement in Daviess County, Missouri established by members of the early LDS church under the leadership of Joseph Smith in 1838. Joseph Smith led surveyors to this area and named it Adam-Ondi-Ahman because, he said “it is the place where Adam shall come to visit his people, or the Ancient of Days shall sit, as spoken of by Daniel the Prophet.” When Smith arrived at the settlement, there were three or four LDS families already living here and the population soon increased to 400. At this time, there were another 600 Mormon converts living throughout the Daviess County. Most of these individuals abandoned their settlements following persecution by other Missouri residents and hostile local officials who refused to certify any land purchases. Several armed mobs attacked the church members by burning cabins, stealing animals, or simply refusing to do business with the newcomers.

On November 7, 1838, and despite being the victim rather than the aggressor in most altercations, local officials forced the LDS settlers to surrender their arms. Church members were given notice that they would need to vacate the county within ten days. Many sought shelter at a hastily-built settlement in Calwell County called Far West. Non-Mormon settlers were allowed to purchase the lands vacated by LDS members, including many cabins and cleared fields. John Cravens purchased most of the central area of the city and renamed it Cravensville.