The third major and perhaps most significant conflict of the 1838 Missouri Mormon War occurred near this location along Crooked River on October 25, 1838. A company under the command of Captain Samuel Bogart was ordered to patrol the no-man’s land between Ray and Caldwell Counties, in an effort to stop armed persons from Caldwell County from invading Ray County. Instead, Bogart and his men entered Ray County, visited the homes of Mormon citizens, disarmed them, and ordered them to leave the county. Bogart then moved into Caldwell County, employing the same tactics here, and ordering Mormons to retreat to the county seat of Far West. While in Caldwell County, Bogart’s men captured three Mormans, Nathan Pinkham, Jr., William Seely, and Addison Green. Reports of the capture reached the settlement at Far West, and a rescue party, lead by David W. Patten (also the leader of the Caldwell County militia), was dispatched. The two groups fought on the banks of Crooked River on the morning of October 25. The Mormons were successful in pushing Bogart’s men out of Caldwell County but suffered more casualties as result. 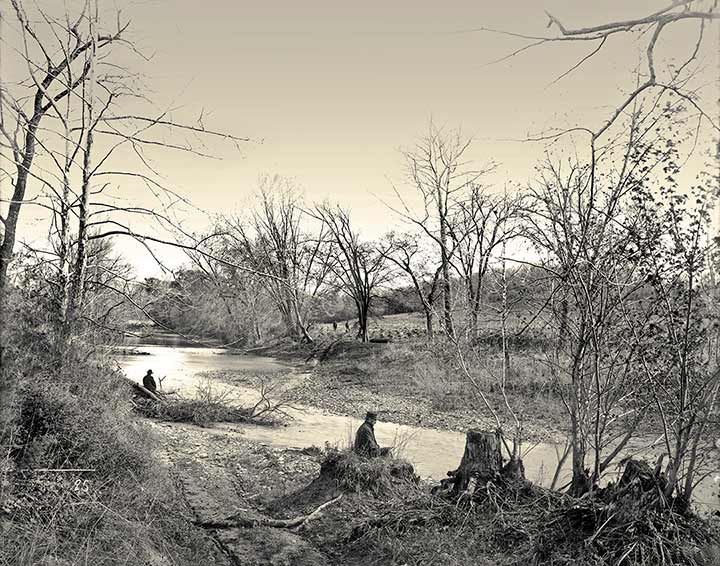 After his reported divine revelation, Joseph Smith penned and published The Book of Mormon in 1830, and in the same year formed The Church of Jesus Christ of Latter-day Saints. In 1831, Smith revealed that the City of Zion was to be in Independence, Missouri (Jackson County). Following this, the Church’s members immigrated en masse to the newly settled state of Missouri, first settling in Jackson County.

Jackson County itself had only been formed in 1826 but was growing rather rapidly. Most settlers hailed from the Upper South-- from states such as Virginia, North Carolina, Tennessee, and Kentucky; the Mormons, on the other hand, were largely from New York, Pennsylvania, Ohio, and even England. Life in the newly settled state was much different than in the long-established East, and guidebooks of the time warned new settlers that the established social hierarchies were not to be followed in the far West; in fact, newcomers were encouraged to mingle and become familiar with their neighbors, disregarding any sense of social superiority. Right away, the settled Missourians and the Mormon population clashed culturally.

By 1833, hundreds of Missourians in Jackson County put their complaints about their Mormon neighbors to paper. They cited the Mormon tendency to refer to Missouri as their “rightful inheritance,” and accused the Mormons of “[having invited the free people of color [from Illinois] to join them [in Jackson].” The Jackson document claimed that the Missourians held no issue with the Mormons religious beliefs, though the language used to describe those beliefs and practices, referring to “pretended revelations” and “the contemptible gibberish with which they habitually profane the Sabbath,” suggests a religious prejudice. It should be noted, that while The Book of Mormon does state that slavery “is against God’s law,” the church newspaper The Evening and Morning Star had in fact reminded the Mormon population that it was illegal for freed slaves to settle in Missouri, and discouraged breaking local laws. In October, violent mobs drove Mormons out of Jackson County.

The group moved on to Clay County and attempted to take back their land in Jackson via eventually unsuccessful petitions and lawsuits. In 1834, Mormons attempted to return to Jackson County with a quasi-military expedition known as Zion's Camp, but this effort also failed when the governor failed to provide expected support. Meanwhile, new converts to the Church continued to move into Missouri and settle in Clay County. As the Mormon population grew, fears about the group’s political power in the region grew, and the situation between Missourians and Mormons again become tense. The citizens of Clay County produced their own document, again citing Mormon abolitionist beliefs, their religious tenants, and “constant communication with the Indian tribes of the frontier” as the Mormons believed that Native Americans were “a part of God’s chosen people.” Hoping to avoid the violence that had occurred in Jackson County, Alexander William Doniphan pushed a law through the Missouri legislature that created Caldwell County, Missouri, specifically for Mormon settlement in 1836.

The creation of Caldwell County provided a tenuous and temporary peace. Members of the Mormon population had already begun buying and inhabiting land in what would become Caldwell County before the formal agreement. Mormon leader and member of the Missouri State Legislature John Corrill wrote, “Friendship began to be restored between [the Mormons] and their neighbors, the old prejudices were fast dying away, and they were doing well, until the summer of 1838.”

While the majority of the Mormon population resided near the town of Far West in Caldwell County, where Smith had established the new Church headquarters, more Church members continued to move from Ohio (where headquarters had previously been located), and settled in nearby counties, including Daviess and Carroll Counties. Many Missourians saw these settlements as a violation of the Caldwell compromise; the Mormons disagreed, citing that the compromise had only forbidden large Mormon settlements in Clay and Ray Counties.

During this time, the Church in Missouri was experiencing inner division. As key members left Caldwell County, their reports of mistreatment fanned the fires anti-Mormon sentiment. On July 4, 1838, Sidney Rigdon gave a speech in which he declared that the Mormons would not tolerate further persecution from the Missouri citizens, saying “And that mob that comes on us to disturb us, it shall be between us and them a war of extermination; for we will follow them until the last drop of their blood is spilled; or else they will have to exterminate us, for we will carry the seat of war to their own houses and their own families, and one party or the other shall be utterly destroyed".

The first debacle in what would come to be known as the 1838 Missouri Mormon War occurred on August 6, election day in Daviess County. Violence ensued when a group of Mormon citizens attempted to enter the polling place to vote and were blocked by other Daviess County Citizens.

Earlier in 1838, a Carroll County landowner sold his plots in the nearly empty town of De Witt, MO to a handful of Mormon leaders, and they began to improve and move into the land. The citizens of Carroll County voted to not allow the Mormons to settle on the land they had purchased and word was sent to George M. Hinkle and John Murdock, who were in charge of the settlement project. Hinkle and Murdock refused this order, and citizens of Carroll County eventually took up arms against the Mormon settlement in De Witt. This resulted in a ten-day siege, in which the Missouri Governor Lillburn Boggs refused to intercede. On October 11, Mormon leaders surrendered and began marching out of Carroll County; two Mormon women died during the move, and several children took ill and died later.

On October 18, non-Mormon General David R. Atchison wrote to Governor Boggs, stating that “a portion of the men from Carroll County are on their march for Daviess County.” He feared similar violence was bound to happen in Daviess, and eventually Caldwell County. Boggs chose not to interfere. Violence against Mormons in Daviess County, such as the burning of their homes and other property destruction, ensued. On October 18, a band of Mormon militia members attacked the towns of Millport, Gallatin, and Grindstone Fork, MO, burning homes and looting the property of Missourians.

To fully understand the events of the Battle of Crooked River, and indeed the preceding entanglements of the Missouri Mormon War, one must understand the militia system in Missouri and the nation at this time. The federal Second Militia Act of 1792 mandated the conscription of able-bodied white men ages 18-45 into state-sponsored militias. By the 1830s however, this had devolved and conscripted militias were generally replaced by volunteer-based local militias that operated under state charters with chosen names. Thus, the lines between local mobs and legally sanctioned militias were blurred at the best of times. According to Terryl L. Givens, “the operative principle seemed to be that anything public opinion considered a threat to American values was fair game” for these local militias. These blurred lines between mobs and militias likely caused the Battle of Crooked River, as each group was technically a legal militia, and believed the other to be an illegal, violent threat.

A company under the command of Captain Samuel Bogart was ordered to patrol the no-man’s land between Ray and Caldwell Counties, in an effort to stop armed persons from Caldwell County from invading Ray County. Instead, Bogart and his men entered Ray County, visited the homes of Mormon citizens, disarmed them, and ordered them to leave the county. Bogart then moved into Caldwell County, employing the same tactics here, and ordering Mormons to retreat to the county seat of Far West. While in Caldwell County, Bogart’s men captured three Mormans, Nathan Pinkham, Jr., William Seely, and Addison Green.

Reports of the capture reached the settlement at Far West, and a rescue party, lead by David W. Patten (also the leader of the Caldwell County militia), was dispatched. The two groups fought on the banks of Crooked River on the morning of October 25. The Mormons were successful in pushing Bogart’s men out of Caldwell County but suffered more casualties as result.

Following the Battle of Crooked River, exaggerated reports of the number of deaths reached Missouri Governor Lillburn Boggs. In response, he issued Missouri Executive Order 44, commonly known as the Mormon extermination order, on October 27. The order stated, "the Mormons must be treated as enemies, and must be exterminated or driven from the State if necessary for the public peace..." This executive order remained Missouri law until 1976 when it was finally stricken from the books by Governor Christopher Samuel Bond.

On October 29, a large band of vigilantes (who accused a group of Mormons of gathering at Haun’s Hill to plan an attack on nearby Livingston County) entered Caldwell County. The group of about 250 armed men reached the Mormon settlement on October 30, where roughly 40 Mormon families were gathered. The mob attacked, and 17 LDS members were killed, including 10-year-old Sardius Smith. Survivors of the massacre fled to Far West.

Siege and Capture of Church Leaders:

The mob and the state militia followed the survivors to the Church headquarters at Far West and laid siege to the compound. Joseph Smith ordered Colonel George M. Hinkle, the head of the Mormon militia in Caldwell County, to meet with Major General Samuel D. Lucas to reach a peace agreement. Lucas ordered the LDS members to give up their leaders for arrest and trial, and dictated that any Mormon who had taken up arms sell his property (the profits of which would go back to the affected Missourians and the costs of the militia) and leave the state. After the Church leaders were arrested and the militia disbanded, Lucas’ troops ransacked and looted Far West, and were reported to have been particularly violent toward the women.

Following the surrender, the Missourians effectively forced the Mormon population out of the state. They found refuge in Quincy, Illinois, and eventually resettled in a town they called Nauvoo, Illinois.

Givens, Terryl. The Viper on the Hearth Mormons, Myths, and the Construction of Heresy. New York, NY: Oxford University Press, 2013.

Office of the Secretary of State of Missouri (1841), Document containing the correspondence, orders, &c., in relation to the disturbances with the Mormons; and the evidence given before the Hon. Austin A. King, judge of the Fifth judicial circuit of the state of Missouri, at the Court-house in Richmond, in a criminal court of inquiry, begun November 12, 1838, on the trial of Joseph Smith, Jr., and others, for high treason and other crimes against the state., Fayette, Missouri: Printed at the Office of the Boon's Lick Democrat.