This solemn monument reminds visitors of the destructive nature of the Civil War upon thousands of families in Missouri. Known as the "Burnt District," this section of Missouri was destroyed by Union forces following General Order No. 11 in 1863. Recognizing that this area harbored rebel bushwhackers who were raiding homes in Kansas and other areas under the guise of supporting the Confederacy, Union leaders ordered the evacuation of all citizens from Jackson, Cass, Bates, and northern Vernon Counties. While a number of residents were aiding bushwhackers, the majority were simply trying to avoid the conflict and protect their farms and homes from raiders and thieves. After the citizens left their homes, Union troops destroyed homes, farms, and supplies throughout the region. This "scorched earth" policy was designed to prevent bushwackers or rebel supporters from remaining in the area but had a far more devastating consequence upon the people who lived in the area. The selection of a chimney represents the only portion of hundreds of homes that remained standing following the destruction by fire. 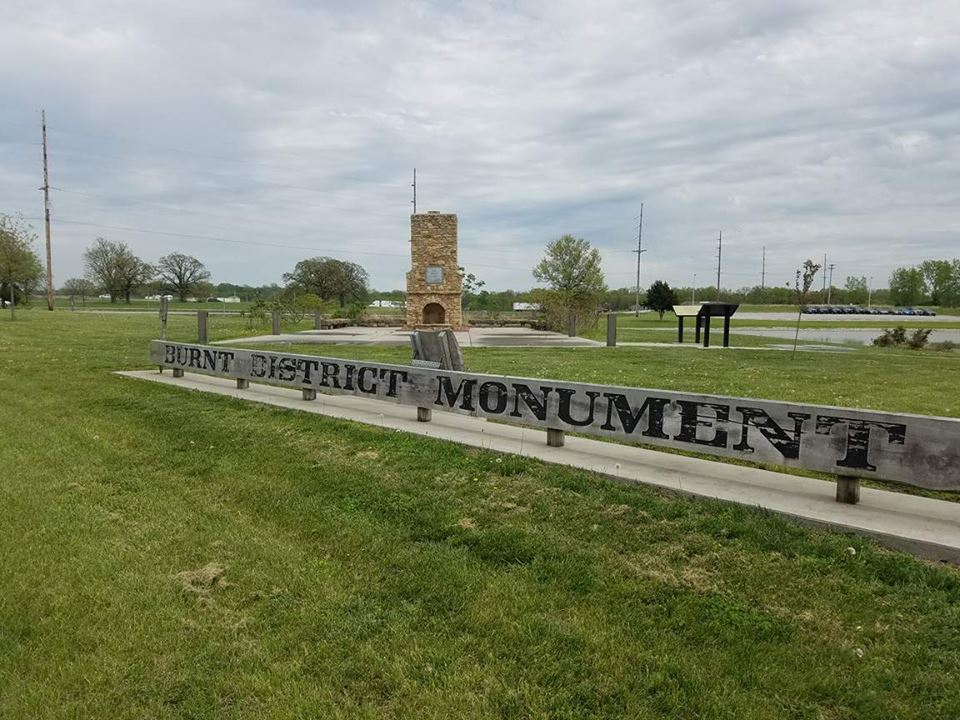 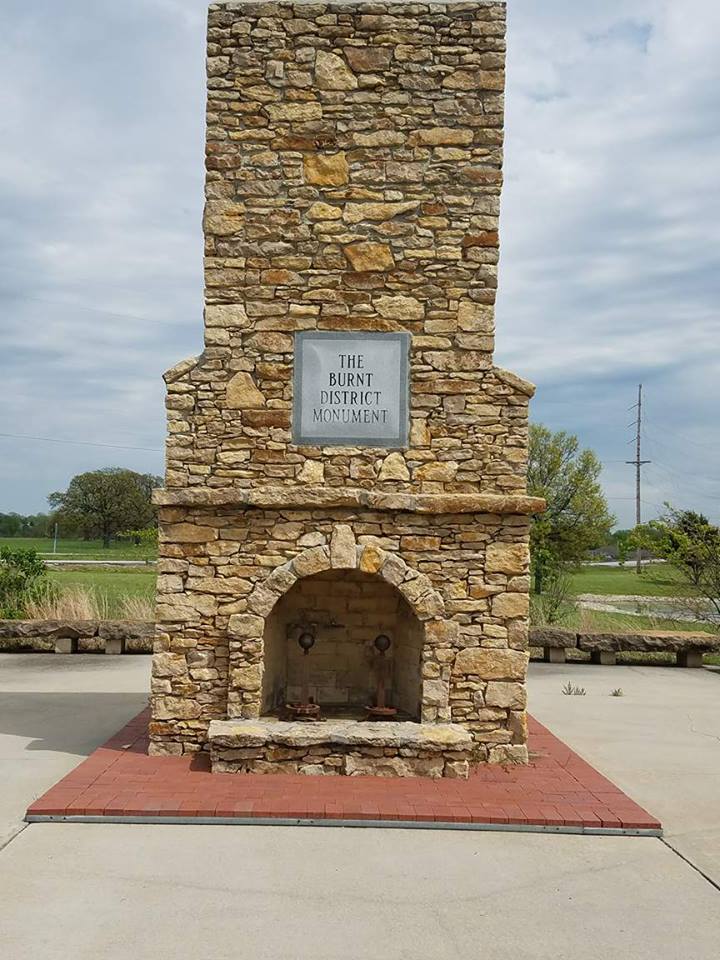 A WPA mural created in 1939 and on display at the post office in nearby Pleasant Hill depicts a family returning to their destroyed home. 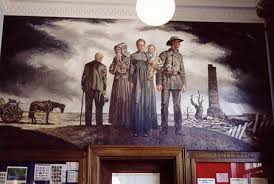 "Order No. 11," by George Caleb Bingham. This mural can be viewed at the State Historical Society of Missouri 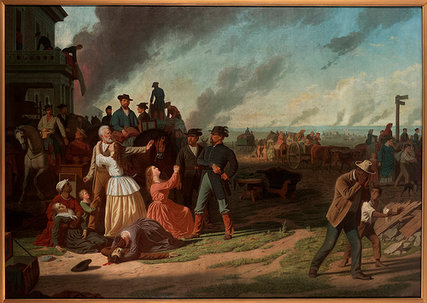 General Thomas Ewing Jr. targeted Missouri's homefront on the border due to the support the women provided guerrilla soldiers. Women were providing guerrilla soldiers with clothes, food, and shelter, even smuggling these items across borders for their men. The Union army struggled to control guerrilla warfare due to its clandestine nature and in June of 1863, General Thomas Ewing Jr. was sent to the District of the Border in Kansas City to find a way to put an end to guerrilla activity. Ewing requested his commanding officer John Schofield "allocate more regular cavalry to the defense of the border" while Ewing organized a volunteer cavalry from Kansas. In total, this new force included 94 officers and 1,755 men. However, Ewing struggled with recruiting men because many loyal Kansas men were reluctant to leave their homes or were already far away fighting for the Union army. The same month Ewing arrived in the District of the Border, several thousand Confederate men had returned home, and many of them felt pressured to join the guerrilla war effort because they were "returning enemy soldiers, and the loyal citizenry in their neighborhoods were sure to report them to Union authorities." With tensions increasing, Ewing developed a plan and requested permission from headquarters in St. Louis to carry it out. Recognizing the support guerrilla soldiers received from households along the border, Ewing proposed Order no. 10 which would allow him to round up women associated with guerrillas and guerrilla activity and resettle them in northern Arkansas. He even suggested that the Union military would pay for these women to move. He believed that the guerrilla men would follow their women kinfolk to Arkansas, whereupon they should be forgiven for their service to the Confederate army and for being involved in guerrilla warfare.

Ewing went to St. Louis to discuss this plan in person with Schofield and returned to the District of the Border on August 13th with permission to carry the order out. However, his plans were quickly thwarted. On August 14th, a Kansas City jail holding several women who were associated with notorious guerrillas such as "Bloody" Bill Anderson's sisters collapsed, killing and injuring several of the women. This is believed to have motivated the infamous raid on Lawrence, Kansas (a well-known abolitionist town) that resulted in the deaths of between 160 and 190 men and teenage boys. This raid in turn led to Ewing reversing Order no. 10 and issuing the more destructive Order no. 11 which evacuated all the disloyal citizens out of Jackson, Cass, Bates, and part of Vernon County. Their homes, farms, and supplies were then burnt down or confiscated in order to ensure that they couldn't easily return to the area and continue the supply line that supported the guerrilla conflict. The desolation and ruins left behind earned the three and a half effected counties the moniker of "The Burnt District."

Ewing later explained his decision as intended to both end the attacks by bushwhackers and protect the people of Missouri against reprisal by Kansans who might seek revenge upon the people who inhabited areas known to harbor rebel sympathies. He also tried to defend his choice to issue the order by claiming that the women associated with guerrillas were victims of guerrilla warfare and that the order was meant to protect them from further abuse at the hands of their guerrilla kin. However, it is evident from primary documents of the time period that Ewing was aware that women in the area were actively providing support for the guerrilla soldiers. Historians continue to debate the necessity and effectiveness of General Thomas Ewing Jr.'s Order Number 11. His decision exiled several thousand citizens of a state that remained in the Union and hardened anti-Union feelings in the area. At the same time, bushwhacker attacks had resulted in terrible violence along the Kansas-Missouri border, and these counties were home to many families that had offered material support to the bushwhackers and other Southern sympathizers.

Union officer and Missouri resident George Caleb Bingham vocally opposed Order no. 11 and it is even said that he attempted to persuade Ewing not to issue the order. When Ewing refused to comply, Bingham allegedly replied: "If God spares my life, with pen and pencil, I will make this order infamous." Keeping his promise, Bingham painted a mural depicting the destruction caused by Order No. 11 following the war. Bingham described the aftermath of this order in a 1877 letter to the St. Louis Republican newspaper. He wrote, “Dense columns of smoke arising in every direction marked the conflagrations of dwellings, many of the evidences of which are yet to be seen in the remains of seared and Blackened chimneys, standing as melancholy monuments of a ruthless military despotism which spared neither age, sex, character, nor condition." When Ewing attempted to build a political career for himself in Ohio, Bingham repeatedly sabotaged him by distributing a steel engraving of his painting to Ewing's potentially voters. The issuance of Order No. 11 remains of one the most significant historical events to take place in the area.

Neely, Jeremy. The Border Between Them: Violence and Reconciliation on the Kansas-Missouri Line. Columbia London: University of Missouri Press, 2007.