Sleepy Hollow Cemetery is the largest cemetery in Concord, Massachusetts. It is the resting home of many local, national, and international figures of historical and literary significance. In addition to their graves, visitors are greeted with a moving memorial to some of the town’s fallen soldiers. The cemetery was deemed a site of public interest and placed on the National Register of Historic Places in 1998. 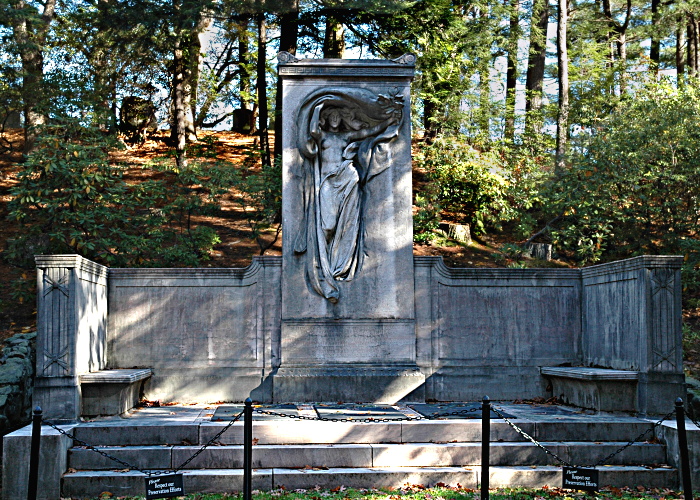 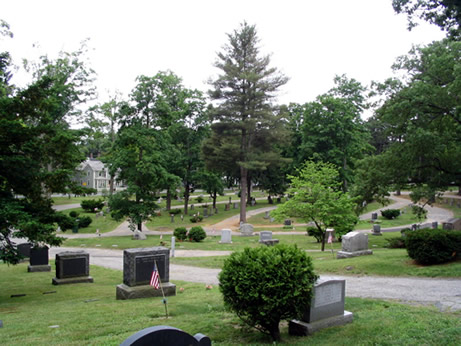 In the early part of the nineteenth century, the Town of Concord realized that it would need to establish a third burying ground for its deceased citizens.  They purchased a parcel of land in 1823 not far behind the “Old Hill.”  The new grounds were aptly named “New Hill Cemetery.”  The first person buried in the cemetery was laid to rest later the same year, a woman named Mrs. Anna Robbins.

A few years later, a 25-acre parcel of land was purchased and added to the cemetery.  It is reached from the New Hill Cemetery via a woodland trail.  This is the area commonly referred to as “Sleepy Hollow Cemetery.”  The cemetery was consecrated in a dedication ceremony featuring an oration by Ralph Waldo Emerson, who was then a member of the town’s Cemetery Committee.

The cemetery is significant to literary historians because of a famous ridge located in the newer part of the cemetery.  This strip of land is called “Author’s Ridge” and is the home of several American literary greats, including Ralph Waldo Emerson, Henry David Thoreau, Louisa May Alcott and her father, Bronson Alcott.

At the entrance to Sleepy Hollow, there is a large statue called the “Melvin Memorial” or “Mourning Victory.”  The statue was commissioned by James Melvin.  Melvin requested an elaborate marker to memorialize the sacrifices of three of his older brothers who fought and died in the American Civil War.  In 1861, Asa, John and Samuel Melvin enlisted and left their home to fight in the war.  Unfortunately, they did not return. Samuel was captured and imprisoned at Andersonville just five days before he was supposed to go home.  He kept a journal to document his days in the dreadful prison.  That journal is regarded as one of the most significant historic accounts of the life (or end of life) in the Civil War’s most miserable penal institution.  James was too young to enlist with his brothers, but did so in 1864 when he was finally able.  Famed sculptor Daniel Chester French created the masterpiece at Melvin’s request in 1897.  French is the same sculptor who designed the Seated Lincoln at the Lincoln Memorial in Washington, DC.

Another significant aspect of the cemetery is its beauty.  The landscape was designed by Horace Cleveland, one of the pioneers of landscape architecture (along with Frederick Law Olmsted who designed so many of the green spaces in and around Boston). The cemetery features gently curving roads that blend with the site’s natural features.   Cleveland planned how the cemetery would look; the actual cutting and planting fell to a Concord local, John Keyes.  Keyes is sometimes referred to as the “Founder of the Cemetery” especially since there is an epithet memorializing that fact on his own grave marker.

About the Cemetery. The Friends of Sleepy Hollow Cemetery. Accessed May 04, 2017. http://www.friendsofsleepyhollow.org/index.html.

Sleepy Hollow. The Town of Concord, Massachusetts. Accessed May 04, 2017. http://www.concordnet.org/317/Sleepy-Hollow.

Cemetery Rules and Regulations. Town of Concord. Accessed May 04, 2017. http://www.concordnet.org/DocumentCenter/View/722.