In 1898 F.A. Seiberling founded the Goodyear Tire and Rubber Company which he named after Charles Goodyear the inventor of the vulcanization process of rubber. As the industrial age was booming and Akron Ohio quickly became the “Rubber Capital of the World.” With his company reaching great success, Seiberling was able to fulfill his architectural aspirations when building his family's home. Their estate took from 1912 to 1915 to build and was named by Seiberling and his wife “Stan Hywet” which means stone quarry on Old English. Many other homes in a similar style were built during this time but Stan Hywet is one of the few remaining in the country. The Seiberling family remained living in the house until 1957 when they donated it to a non-profit organization because they wanted the public to enjoy the home as well. Since the donation of the home and the other buildings on the vast property, it has been made into a museum. The property includes the Manor House, the Gardens, the Corbin Conservatory, the Gate Lodge, and an archive that holds information about the family's history and the history of the property. Great care and detail went into the creation of the gardens, conservatory and each building. Seiberling hired Charles Schneider as the architect for the property and he designed and built the Manor House, the Gate Lodge which was their small country estate, as well as the conservatory. F.A. and his wife Gertrude Seiberling along with Schneider, traveled throughout England visiting various estates in order to get ideas and inspiration for their home. The gardens were designed by landscape artist Warren Manning. There is also an English Garden on the property which was designed by Ellen Biddle Shipman and it is one of the only gardens by this designer currently open to the public. Stan Hywet Hall and Gardens is open year-round to the public. The buildings are all decorated for the Holiday seasons and make the trip in the winter time well worth it. The property is the only National Historic Landmark in Akron and is the city's only historical area on Save America's Treasures list. It is also an American Alliance of Museums accredited museum. Visiting hours as well as more information about the hall and gardens is available on their website. 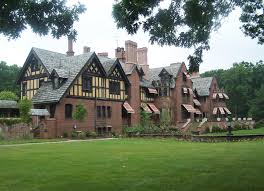