This historical marker stands at the former home of the Quaker abolitionist Benjamin Lundy. Constructed in 1813, one year after Lundy and his family moved to the area, this house is the location where Lundy's Union Humane Society met. This organization became the first abolitionist organization west of the Appalachians. Lundy moved to this home in 1820 and it is here where he published the Genuis of Universal Emancipation. In 1848, part of this building was used as the home of the Free Labor Store, a Quaker mercantile business that refused to sell any goods made by slave labor. Given the significance of Lundy's publishing career, and the significance of the Union Humane Society, this building was declared a National Historic Landmark in 1975.

In 2015, the historic home was acquired by Ohio History Connection and the organization is working to preserve and restore the building. 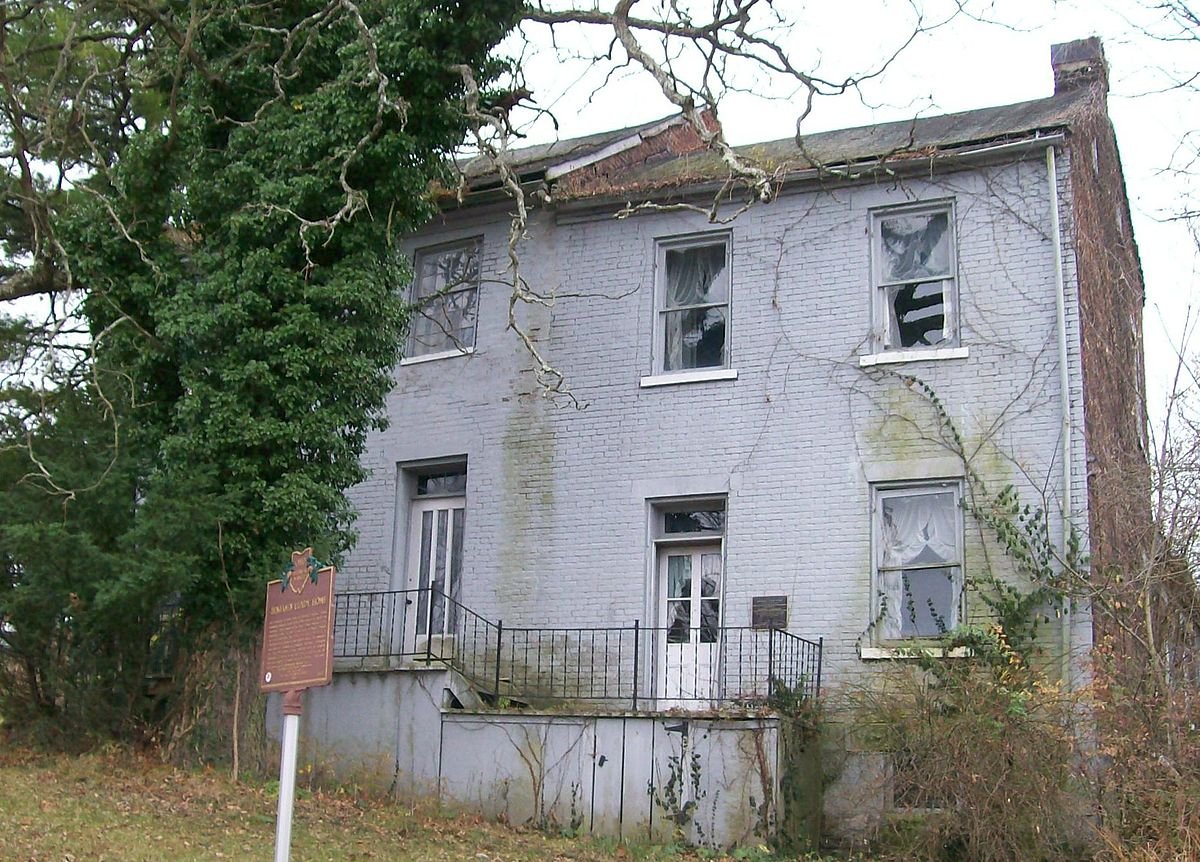 On July 4, 1787, future abolitionist and philanthropist Benjamin Lundy was born to Quaker parents in Hardwick New Jersey. In the early 1800s, the Quakers were the only national Christian domination that was committed to the abolition of slavery. The Quaker belief in the natural rights of man influenced Lundy's view of the world around him, including the slave trade. At the age of nineteen, Benjamin moved to Ohio River town of Wheeling, Virginia (WV) were he served as an apprentice to a saddler. Wheeling was a center of the slave trade, and it was in Wheeling where Lundy learned of the brutal inequality of slavery first hand.

After moving to the Ohio town of Saint Clairsville in 1812, Lundy established the Union Humane Society in 1815. The Union Humane Society was the first organization west of the Appalachians dedicated to the abolition of slavery. At the society's second meeting on Lundy’s twenty-ninth birthday, July 4, 1816, the Union Humane Society ratified a group constitution in nearby town of Mt. Pleasant, Ohio. The constitution embodied the ideals of the Declaration of Independence, and the Golden Rule and in it the group pledged to promote the gradual abolition of slavery. The society began with less than ten members but grew to nearly five-hundred.

Lundy wrote for several anti-slavery periodicals and newspapers before founding his first newspaper, “The Genius of Universal Emancipation” which was first published at this location in Mt. Pleasant. This paper began as a monthly publication but would later become a weekly and was published and widely distributed among abolitionists.  While Lundy was away on lecture tours, the paper was only published irregularly. William Lloyd Garrison assisted Lundy in publishing and distribution the paper from September 1829 until March 1830.

While the areas around St. Clairsville in eastern Ohio were welcoming to Benjamin Lundy and his abolitionist views, due in part to the large population of Quakers, many Ohioians were hostile to Lundy. This did not deter Lundy, who also traveled and lived in the South while speaking against slavery. Lundy was one of the leading abolitionist speakers, traveling internationally until his death in 1839. Lundy endured many personal sacrifices for his position, including the decision to close his profitable business to dedicate his life to the anti-slavery struggle. He also endured a severe beating at the hands of a notorious Baltimore slave trader.

The Union Humane Society was the first group west of the Appalachians to be dedicated to the abolition of the institution of slavery and was Ohio’s first anti-slavery society. In the latter months of 1815, Lundy gathered friends at his St. Clairsville home to discuss the creation of an anti-slavery society. While reports vary of the exact date, at the group’s second meeting in 1816, the Union Human Society would ratify a group constitution in nearby town of Mt. Pleasant, Ohio.   The constitution embodied the ideals of the Declaration of Independence, and the Golden Rule and in it the group pledged to promote the gradual abolition of slavery in and outside of the state of Ohio. Those who signed the constitution before June of 1816 became charter members of the UHS.   In the constitution the group pledged to end the racial and constitutional barriers preventing African-Americans from exercising their full civil rights and the group committed to the gradual abolition of slavery in the United States.

Lundy and other charter members hoped that the UHS would become the center of national anti-slavery organization and the group’s scalable structure reflected this.  The enthusiastic support the UHS received shortly after its founding among both Quaker and non-Quaker residents in eastern Ohio and in minimal support from the areas around Wheeling, Virginia only inflated these hopes.  Early members were influential leaders in their communities such as editors, lawyers, doctors, businessmen and other civic leaders.  Within months of its founding, eight local chapters were established in Ohio and membership quickly grew to nearly five-hundred people, however the organization devoted more time and effort to the distribution of anti-slavery propaganda than to direct action and enthusiasm as well as membership numbers slowly began to fall.