In 1756, the New Hampshire Gazette became the first newspaper in colonial New Hampshire. The paper is still produced today, making it one of the oldest newspapers in North America. Daniel Fowle established the newspaper and operated it until his death in 1787. The city of Portsmouth learned about local events as well as the events leading up to the American Revolution from Fowle's paper. Primus, an enslaved man, oversaw the printing press of Gazette for fifty years. Little is known about Primus, the man who produced the paper that shaped the views of so many New Hampshire residents. He lived in a small house outside of Fowle’s home with his wife and Fowle’s other female slaves. Although he did not enjoy the freedom of his fellow citizens, written accounts indicate that he was held in high esteem owing to his role in the community. Primus live a long life, and his obituary in the New Hampshire Gazette was credited his skill along with a twenty-line poem in his honor.

Plaque for Primus the Pressman. 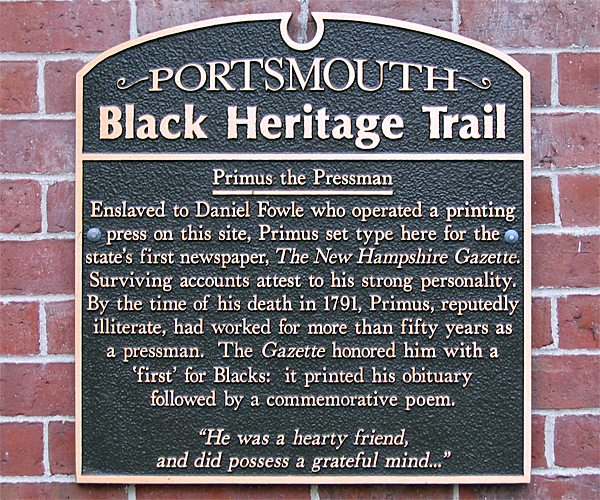 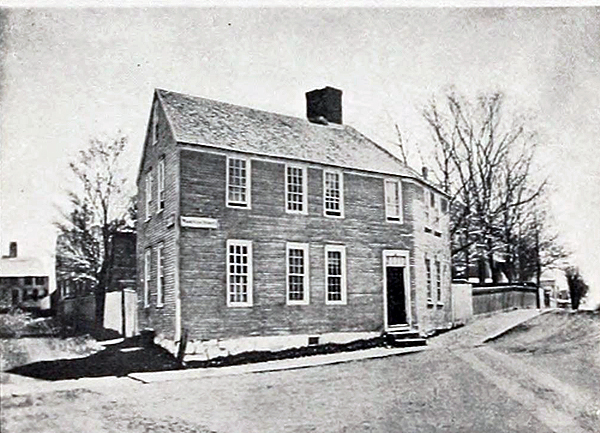 Picture of the first press in NH 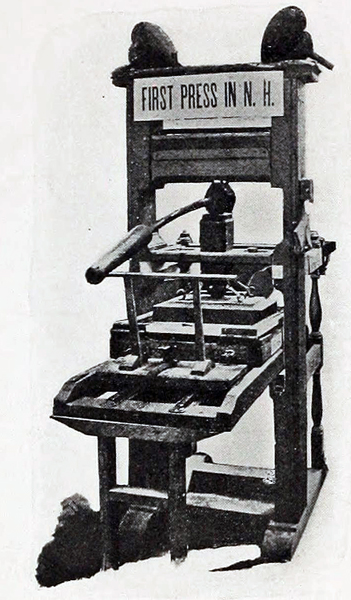 This historical marker on this building designates the place where the New Hampshire Gazette was produced. 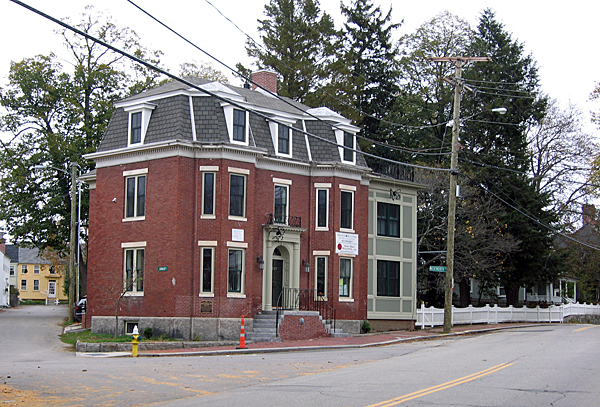 Daniel Fowle was the founder/publisher of the New Hampshire Gazette. This was the first newspaper in colonial New Hampshire began in 1756. Daniel Fowler moved to New Hampshire with his wife, Lydia, and no children. They were reported to be accompanied by two female and one male African slaves. A group of enslaved men, one of which was Primus (no documented last name), worked under Mr. Fowle for the newspaper.

There is no known record of Primus' birth or early history, other than that he came from Africa through the slave trade. Primus oversaw the printing press of the Gazette for fifty years and little is known about Primus, other than that he worked for Mr. Fowler and never lived as a free man. Primus lived in a small house outside Mr. Fowle’s home with his wife and Fowle’s other female slaves.

The only remaining accounts of his life were written by white men after his death, and it is important to recognize that these anecdotes about may be inaccurate and are difficult to separate from the views of white men towards African Americans at that time. The recorded memory of those men emphasized that Primus suffered from a physical deformity. According to these reports, his spine was permanently bent by about 45 degrees. If this is true, it is likely that he suffered from a life of repetitive motion working the manual printing press.

Despite the demands and lack of freedom, Primus lived into his nineties. His obituary in the New Hampshire Gazette “reads: In this town, Primus, a Negro, late the property of Daniel Fowle, Esquire, deceased - his funeral will be tomorrow at six o'clock, P.M. from the dwelling house of the printer hereof, where his acquaintances may attend and pay the funeral obsequies.” A printed obituary for an enslaved man seemed unheard of in this time. More so, a twenty-line poem was printed in the paper soon after the obituary. The poem credits his work as a pressman but offers little personal information.

It is not known where Daniel, Lydia, and Primus were buried but it is likely that they were interned at the city's “Negro Burying Ground”. This black cemetery was unceremoniously replaced by new buildings and streets in the early 19th century. Little is known about the cemetery or its people and the site was only recently rediscovered when excavation below the road took place in 2003 and revealed human remains.