One of four mansions that constitute the Guggenheim Estate, Hampstead House was once owned by two of the most wealthy families in America. The Indiana limestone mansion resembles a castle and includes forty rooms. Construction of the mansion began under Howard Gould, the last surviving son of railroad tycoon Jay Gould. Howard Gould acquired the land in 1900 and first built a castle was intended to be his home. After finding "Castle Gould" to be less comfortable than he planned, Howard commissioned the construction of this mansion which was completed in 1912. Gould moved to Europe in 1917 and sold the estate to Daniel Guggenheim, the son of silver mining magnate Meyer Guggenheim. With Daniel increasingly taking over the operations of the family business, this home served as the summer getaway for the Guggenheim family until 1930 when Daniel Guggenheim died. His widow Florence ordered the construction of a fourth mansion on the grounds, Mille Fleur, where she lived until 1942 when she donated the entire estate to the Institute of Aeronautical Sciences. That organization sold the property to the US Navy and now serves as a professional society for aerospace engineers. The Navy operated the property as a training center until 1971 when Nassau County acquired the property which is now maintained and operated by the Sands Point Preserve Conservancy.

The front entrance of the house 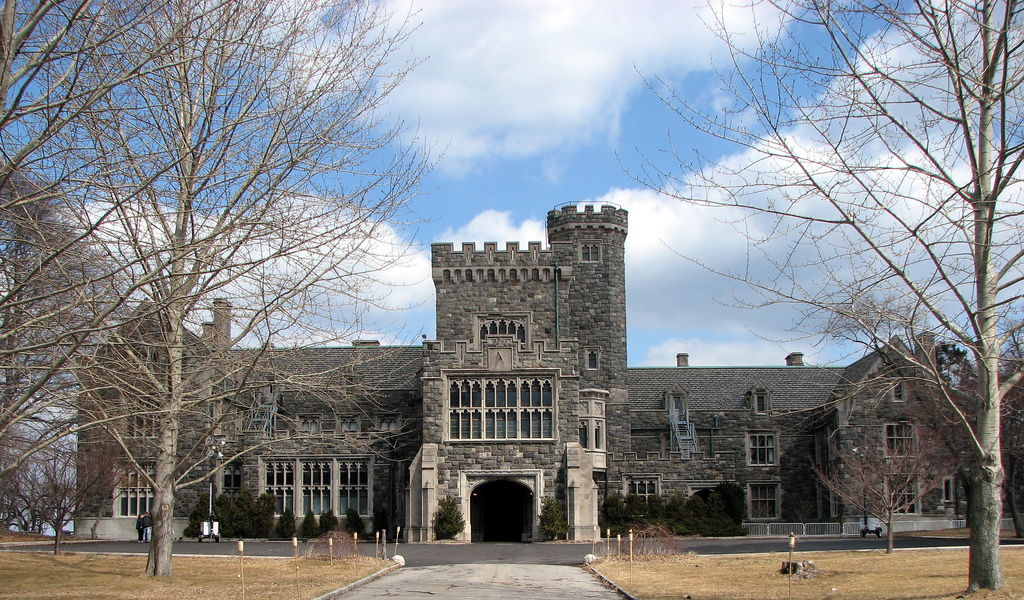 The rear of the house and the rose garden

An aerial view of the house 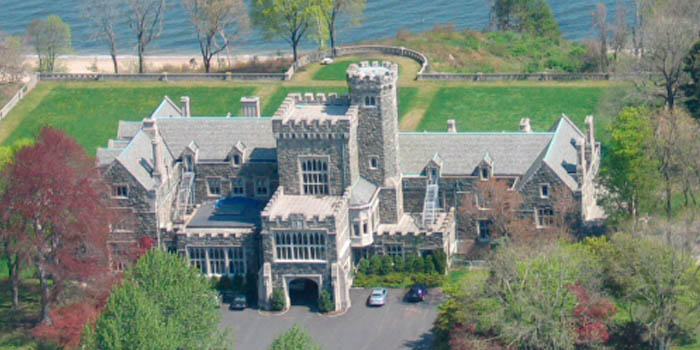 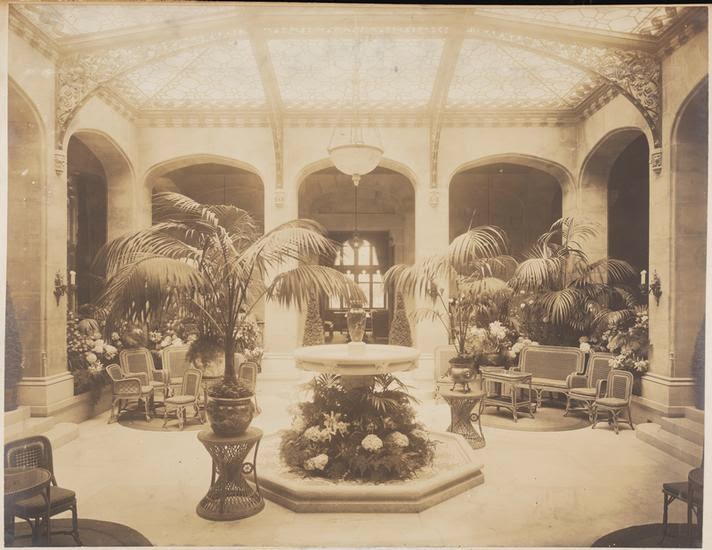 Hempstead House is one of four houses on the Guggenheim estate and was one of the most lavish estates on the Gold Coast. During the roaring 1920s, the estate was the place where the Guggenheim family spent their summers and hosted parties, performances and galas. Sands Point might be most famous to readers as the "East Egg" in F. Scott Fitzgerald's Great Gatsby.

The mansion was designed by architects Hunt & Hunt and includes forty rooms with the first and second floors covering over 1.5 acres. Every room on the second floor contains a carved fireplace which is unique to each room. Perhaps the most impressive feature of the structure is the sixty-foot entrance foyer that includes a specially-crafted Wurlitzer Opus 445 Theatre organ. The organ was customized with specially designed pipes that exit through the floor of the foyer. The mansion was once full of European artwork, medieval wall tapestries, oriental rugs, and other assorted treasures and antiquities.

The mansion's library was modeled after the library within the palace of King James I. The billiards room once had a gold leaf ceiling, hand tooled leather wall covers, and 17th 17th-century workings taken from a Spanish palace. There is also a sunken Palm Court which once contained over 150 rare orchids, flowers and trees as well as an aviary house for exotic birds. Tours are available with advance reservations.

The house was closed in 1930 after the completion of a new mansion on the grounds. It was reopened in 1940 as a refugee home for children escaping the war in Europe. In 1942, 162 acres of the estate were donated to the Institute of Aeronautical Sciences and was completely purchased by the navy in 1946 to act as a Naval Training Device Center. And finally, in 1971 the county purchased the estate.

Today, tours are given of the house on weekends and it acts as the location for many weddings, corporate parties, private parties and is also the location where movies and shows such as Scent of A Woman, Malcolm X, Great Expectations, Teenage Mutant Ninja Turtles, The Blacklist, Gotham, Billions, Dare Devil, The Americans, Boardwalk Empire, Royals Pains and Masters of Sex were all filmed.

Guided tours of Hempstead House are available on Wednesdays at 2 pm and most Saturdays and Sundays throughout the year at 11 a.m. and 2 p.m