The Hotaling Building is a historic building in San Francisco located at 451 Jackson Street in Jackson Square. Built in 1866 by Anson Parsons Hotaling the building was originally intended to be a hotel. However, Hotaling later switched over to the whiskey business. It was also one of the few surviving buildings after the 1906 Earthquake and Fire, thanks to a mile long fire hose that stretched through Fisherman's Wharf and Telegraph Hill. After the earthquake and fire, the Hotaling business started to decline. However, it was revived in 1952 when Henry Lawrence and his wife purchased it and turned it into a wholesale decoration and design firm. 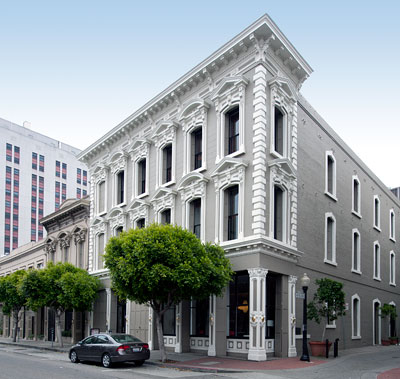 In its day, A. P. Hotaling’s warehouse was the West Coast’s largest whiskey repository. When the building caught fire. In the earthquake of 1906, the building caught fire, although it was saved by some quick-thinking firefighters. The next day the Army arrived to help in the devastation, but they intended to destroy the entire building in order to protect a government building next door. Because of the huge amounts of flammable alcohol on the premises, it was decided that the whiskey should be moved and the whole block should be saved.

The Hotaling building was one of the lucky ones. Due to a huge effort, sea water was pumped through huge hoses, stretching some eleven blocks, ultimately allowing the Hotaling fires to be put out. Sadly this was a rare case as much of the city was destroyed, some estimated say up to 28,000 buildings were destroyed.

Local poet, Charles Field described the disaster with a piece of wit that now decorates the plaque marking the site:

If, as they say, God spanked the town / For being over-frisky, / Why did He burn His churches down / And spare Hotaling’s whiskey?