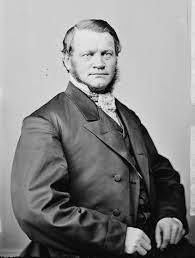 The Grinnell House was located at 4th and Park at the time the minister used his home to assist fugitives to freedom via the Underground Railroad.

Favored by mild winter weather, John Brown & his crew continued east to Grinnell, Iowa, on February 20, 1859. They stayed two days, and Brown developed his plan to attack the US Arsenal at Harpers Ferry during his time with town founder Josiah B. Grinnell (see photo). Grinnell was a Vermont native, a Congregationalist minister and part of the strong anti-slavery movement in town. Grinnellians gave John Brown $25 and provisions for several days.

Grinnell later served in the Iowa Senate and US House of Representatives (where he was physically assaulted by Congressman Lovell Rosseau for insulting his home state of Kentucky). He was a benefactor for Grinnell College and later become the Director of the Rock Island Railroad. Grinnell passed away in 1891 and is buried at Hazelwood Cemetery in Grinnell.