The Goodyear Airdock is a construction and storage airship hangar facility in Akron, Ohio. When it was completed in 1929, it was the largest structure in the world without interior supports. It is 1,175 feet long, 325 feet wide, and 211 feet tall, with about 364,000 square feet of unobstructed floor space. At both ends of the building are semi-spherical doors, each weighing 600 tons. Two dirigibles, the U.S.S. Akron and the U.S.S. Macon, were built there, in 1931 and 1934, respectively. The airdock isn't open to the public, but it's visible to those traveling on U.S. Route 224 east of downtown Akron. 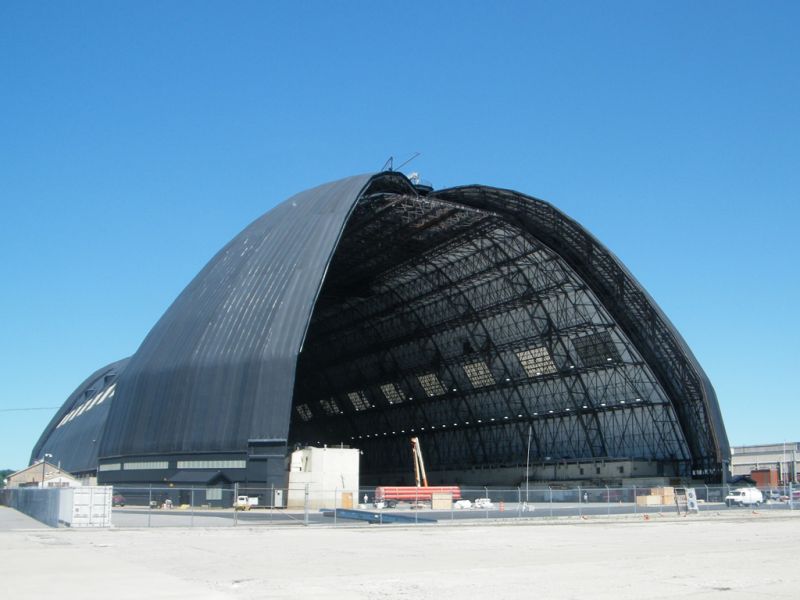 In 1929, the Goodyear-Zepplin Corporation built and opened one of its largest air docks in Akron. Construction began in April and was completed by November with a total cost of $2.2 million. When it was completed it was the largest building in its existence without interior supports. The building is 1,175 feet long, 325 feet wide, 211 feet high and there is enough unobstructed floor space to fit eight football fields side by side. The whole building is supported by thirteen steel arches. Due to the large size of the building the temperature fluctuates greatly so multiple measures were taken in order to better control the temperature and avoid dangerous situations.

Due to the fact that the structure was so large, it was the perfect size to make blimps, dirigibles, and other airships. The main use of the building was to create various airships for the United States military. Two airships were constructed within ten years of the buildings creation both of which were for the U.S. Navy. The USS Akron was built in 1931 and the USS Macon in 1934. Both of these airships crashed within each within one to two years of their creation. These were just two among the many of airships that were built within the large building.

Since the completion of the air dock in Akron, multiple airships were created under its roof. None of these airships were more important than those that were built for the war effort once the United States joined World War II. Multiple airships were created to help with the war effort and some would even talk about watching as multiple types of air transportation took its first flight from the building. The last of the airships created there though was the U.S. Navy's ZPG-3W which was built in the 1960s. Later, the Goodyear Airspace Corporation photographic division was housed there.

The building is still used to create airships for the military today by the Lockheed Martin. In 1986 the kickoff rally for the United Way of Summit County was held at the air dock which brought over 200,000 members of the public. Also Bill Clinton gave a speech at the building during his 1992 election campaign. In 1980 the American Society of Civil Engineers designated it a Historic Civil Engineering Landmark. Due to the fact that the Goodyear Air Dock is still being used, it is not open to the public but is a site that cannot be missed while traveling through the area east of downtown Akron.