SE corner of German and Church Sts. Likely the second house on lot 17, the original front portion was built by Michael Fouke, Sr., about 1795, and sold by the Fouke family in 1815 to Conrad Shindler, who added the rear wing around 1815. For nearly 55 years, this property served as both family home and the location for Shindler’s coppersmithing business. In 1869, 17 years after Shindler’s death, the German Reformed Church bought the home from the Shindler heirs to use as a parsonage. In 1995, actress Mary Tyler Moore, a Shindler descendent, purchased the property and deeded it to the Shepherd College Foundation in honor of her father. It now houses Shepherd University’s George Tyler Moore Center for the Study of the Civil War. 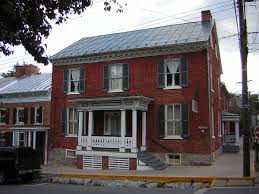 The current house on the property was not the original structure, the current structure was built by Michael Fouke Sr. around 1795. Fouke was a carpenter in Shepherdstown area. Early in the nineteenth century, Fouke sold the property to Conrad Schindler. Schindler purchased the two and a half story Georgian style house in 1815, and held onto the property till 1869. Schindler was a coppersmith, whose work is on display in the Shepherdstown Museum. Some believe that the basement was used for the copper shop, but there is little evidence for the shop being in the house. The shop was probably in the back of the lot. Schindler added the back portion of the house, giving it the L shape that it has today.

The property was modified to allow for renters. The back part of the house was the space for one tenant and the front of the house was another. Mary Tyler Moore and her father are decedents of the Schindlers and watched the property to purchase it as a home for her father as a residence. Unfortunately, by the time the property was for sale, George Tyler Moore could not live in the house, sue to his health. Mary Tyler Moore decided to donate the property to Shepherd University to house the Civil War Library. Said Moore,"I am delighted to share a cherished family landmark, which will live on in history."[1] Today the building is named the “George Tyler Moore Center for the Study of the Civil War.”