Built in 1849, the foundation of this three-story brick building was constructed of the same heavy timbers as is its neighbor the Belli Building. The original building burned down only a year after its construction and was rebuilt by Joseph Genella for his china and glassware business as well as his home. By 1860 Genella had moved but retained ownership of the building, renting it to multiple tenants including bullion dealers, merchandise brokers, a Spanish newspaper (La Voz de Chile), and offices for a mining company. 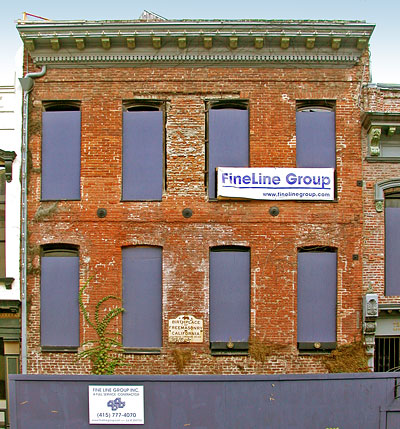 There is a plaque on the Genella Building certifying that San Francisco's first Masonic Lodge meeting was held here. Starting in 1854 the top floor of the building was used as a meeting hall for the Odd Fellows, an international fraternity founded in 1730 in London. The building saw similar use over the next few decades with both the Ancient Jewish Order KSB and the American Protestant Association holding lodge meetings here.

By the 1880s the building was a bath house before becoming a puppet theater in the 1920s. In the 1940s it became a garment factory, before being turned into offices in the 1950s. The building was damaged in the Loma Prieta Earthquake of 1989 and was left vacant for 25 years. The building was rebuilt with the original facade still intact and is now used as apartments.