SW corner of King and German Sts. Was used as a general store or grocery store from the early 1800s until the late 1980s. During the antebellum era local militia organizations used the brick double house attached to the rear of the building as a meeting and drill room. Following the battle of Antietam (September 17, 1862) wounded men were carried to the second floor, one of the main surgeries pressed into action in the emergency. Contemporary accounts reported amputated limbs being thrown from upper windows into waiting wagons. Here also Joseph McMurran, who was to become the first principal of Shepherd, had his private schoolroom after the Civil War. 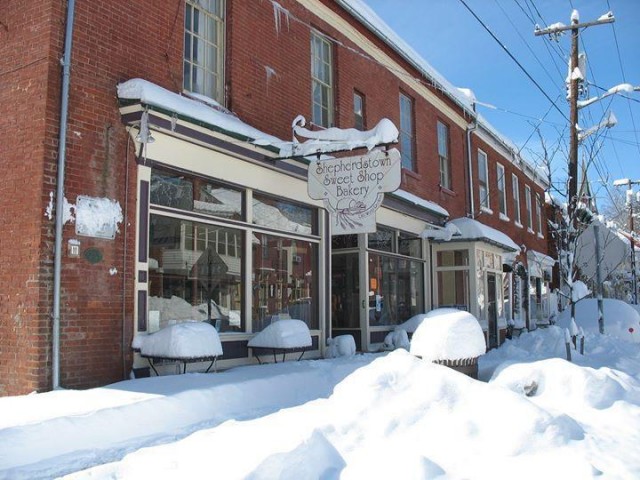 The building known as Moulder Hall was built in 1791. During the 1800s to the 1980s the building was used as a general store and a grocery store, but the building gained the most recognition in the Civil War. After the Battle of Antietam, the whole town became a hospital. Moulder Hall became one of the most crowded of the hospitals because the second floor was used for surgery. There were scores of badly wounded men here, and their groans and cries were pitiful. Some of them had been wounded at the battle of South Mountain, several days before and not all had been so fortunate to have their injuries dressed. Under the direction of surgeons, good women of the town first of all cleaned and washed the wounds and soothed them with warm water preparatory to surgical attention.”[1] Local stories say that the second floor of the building was used for all the amputations and the removed limbs were tossed out of the second story window. When the sidewalk was redone outside of the building, limb bones were discovered, giving credibility to the rumors.