Built in 1940, the Rubber Bowl is a u-shaped stadium located in Akron next to Derby Downs, the home of the American Soap Box Derby. The effort to build a stadium in Akron began in 1939 when a local sportswriter for the Akron Beacon Journal and the director of the Akron Municipal Airport began asking all of their patrons for one dollar donations. The Works Progress Administration approved the construction of the stadium later that year. The stadium received its name because of the great importance of the rubber industry in Akron and holds up to 35,000 people. The main use planned for the newly built stadium was for the University of Akron's football team. Their first game was played there on October 5, 1940. Before the first game though, in June 1940, a state music and drill competition took place as the inaugural event for the new stadium. The University of Akron Zips continued to play all of their home games at what became known the Rubber Bowl until 2008 when a new stadium was built closer to campus. The stadium had multiple uses throughout the years. The Kent State Golden Flashes, located at Kent State University not too far away, played their home games there for ten years as well from 1940-1950 when their own stadium was built. It was also used for multiple NFL games hosting teams such as the Cleveland Rams, who later became the Cleveland Browns who also played there, as well as the Dallas Texans and Chicago Bears in the early 1950s. Local high school teams have also been privileged enough to play on the same field as professional football players. The Rubber Bowl was not only a football venue but also hosted various performing artists. The Ringling Brothers and Barnum & Bailey had their first performance in the stadium after the famous Harford Circus Fire in July on 1944. Various music groups performed there as well including Bob Dylan, Tom Petty and the Heartbreakers, the Rolling Stones, The Grateful Dead, Aretha Franklin and many others. The Rubber Bowl has been used very little since the University of Akron Zips began to play their home games at InfoCision Stadium. In 2013 Team1 Marketing Group of Canton purchased the stadium with plans for major improvements to potentially host a United States Football League called the Akron Fire. The team was never formed and the stadium still sits empty to this day. While the stadium is currently not it use, it is interesting to see the old stadium where many performances were seen and championships were won. 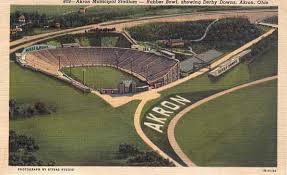