The National Arts Club was founded in 1898 by author and poet Charles De Kay with the mission of, "stimulating, fostering, and promoting public interest in the arts." Cramped in its home on West 34th street, in 1906 NAC president George B. Post purchased what was formerly the mansion of Samuel Tilden at 15 Gramercy Park S to house the growing Club. A major catalyst for growing and preserving interest in the arts, the club attracted many public figures in its day, including Presidents Theodore Roosevelt, Woodrow Wilson, and Dwight Eisenhower. Part of the success of the Club may be attributed to its including and embracing all patrons of the arts, evidenced by the existence of its 13 art program committees. Today, the National Arts Club continues to promote interest in the arts by offering various programs and classes to the general public. 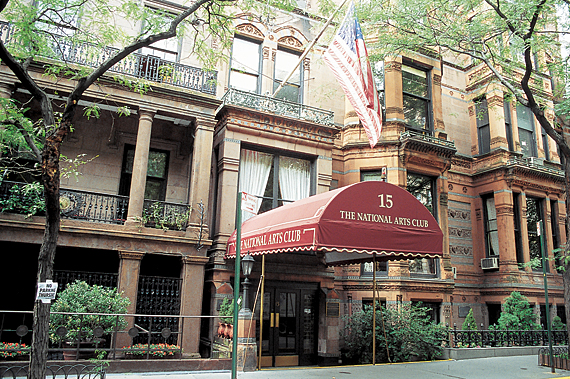 When National Arts Club President George B. Post acquired 15 Gramercy Park S in 1906 to house the growing National Arts Club, he also attained a property rich in history. Director-General Peter Stuyvesant was the first known inhabitant, with the land lying on the northern edge of his farm. Named "Krom Moerasje" for the "crooked marsh" on which his farmland existed, the land was later anglicized to "Gramercy" when the English took over the Dutch New Netherlands in 1664. For the next two centuries the property was inhabited by various families of relative historic ambiguity, until 1863. It was in this year that the Democratic nominee for the election of 1876, Samuel Tilden, purchased the property from stockbroker George Belden. In 1874, Tilden became the 25th governor of New York, and in this same year purchased 14 Gramercy S. After losing the presidential election of 1876, Tilden hired co-architect of Central Park Calvert Vaux to join both properties, 14 Gramercy and 15 Gramercy, into one building. Finished in 1884, the result was the Tilden mansion. Enjoying his mansion for a short two years, Tilden died in 1886.
The National Arts Club was founded in 1898 by author and poet Charles De Kay. After outgrowing its home on 34th Street, NAC governor Spencer Trask and NAC president George Post collectively acquired the former residency of Samuel Tilden for the burgeoning club in 1906. Little is known about the NAC during this time due to a resolution passed in 1932 by the Board of Governors which stated that, "old files and letters and bills in the storeroom prior to 1922 may be destroyed at the discretion of the Secretary and Treasurer." For this reason, our knowledge of the National Arts Club is largely based off of the Club as it exists today.
The National Arts Club of today is host to 13 program committees, which include the following: architecture, art and tech, decorative arts, fashion, film, fine arts, kesselring, literature, music, photography, roundtable, theatre, and young members. The existence of these various committees reflects the Club's commitment to embracing all patrons of the arts, regardless of their perceived viability within the world of art at the time of their inclusion. This commitment is even further reflected by the Club's acceptance of women within their ranks since the founding of the institution. Though the Club remains selective in those it designates as members, it is important to note that nonetheless, the institution remains open to the public for various activities which promote the arts. This includes but is not limited to art classes, which are offered on Monday, Wednesday, and Friday. Today, The National Arts Club continues to honor leaders within their respective art fields by awarding an annual Medal of Honor to those deemed most worthy.