This plaque on the grounds of the Minnetrista cultural center, denotes the probable location of Wah-pe-kah-me-kunk, a Lenape Native American village. This area was later known as "Munsee Town" by white settlers in the area, which gave rise to the current name of the surrounding city of Muncie, Indiana.

This is a photograph of the plaque that marks the Wah-Pe-Kah-Me-Kunk Site on the Minnetrista grounds. 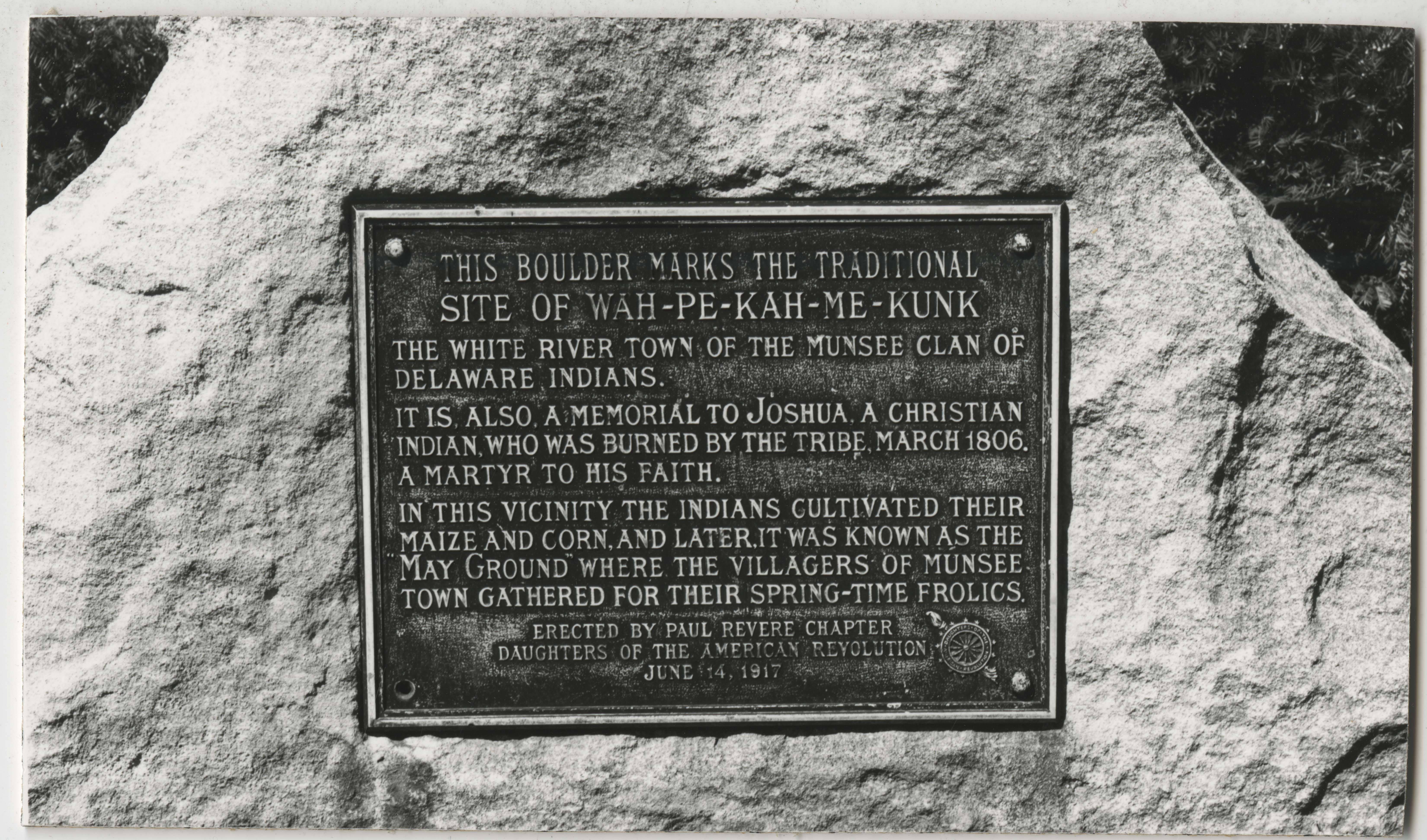 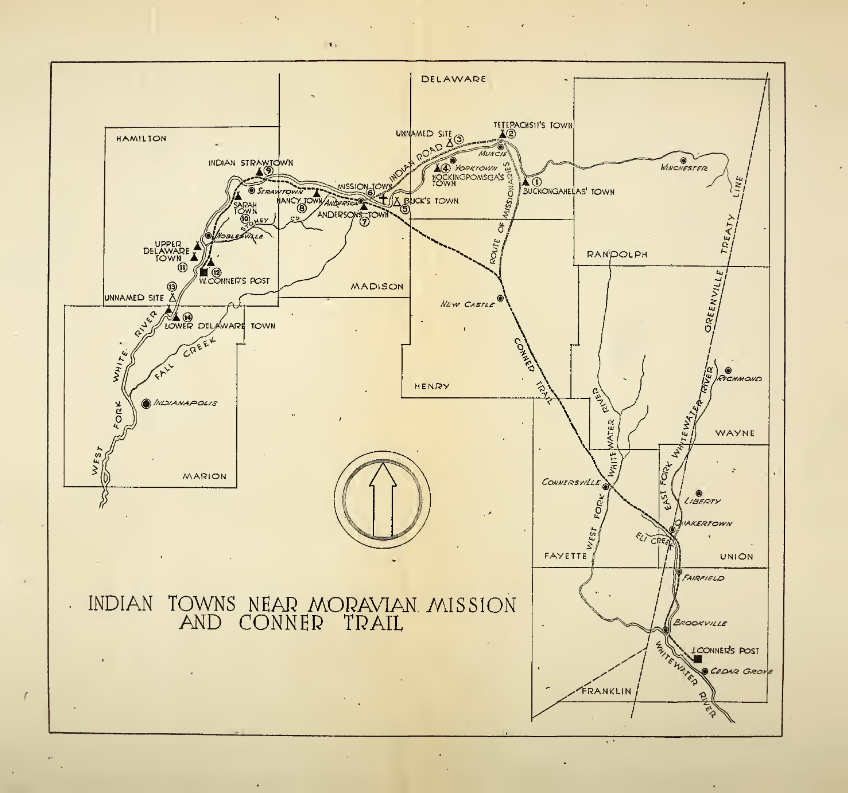 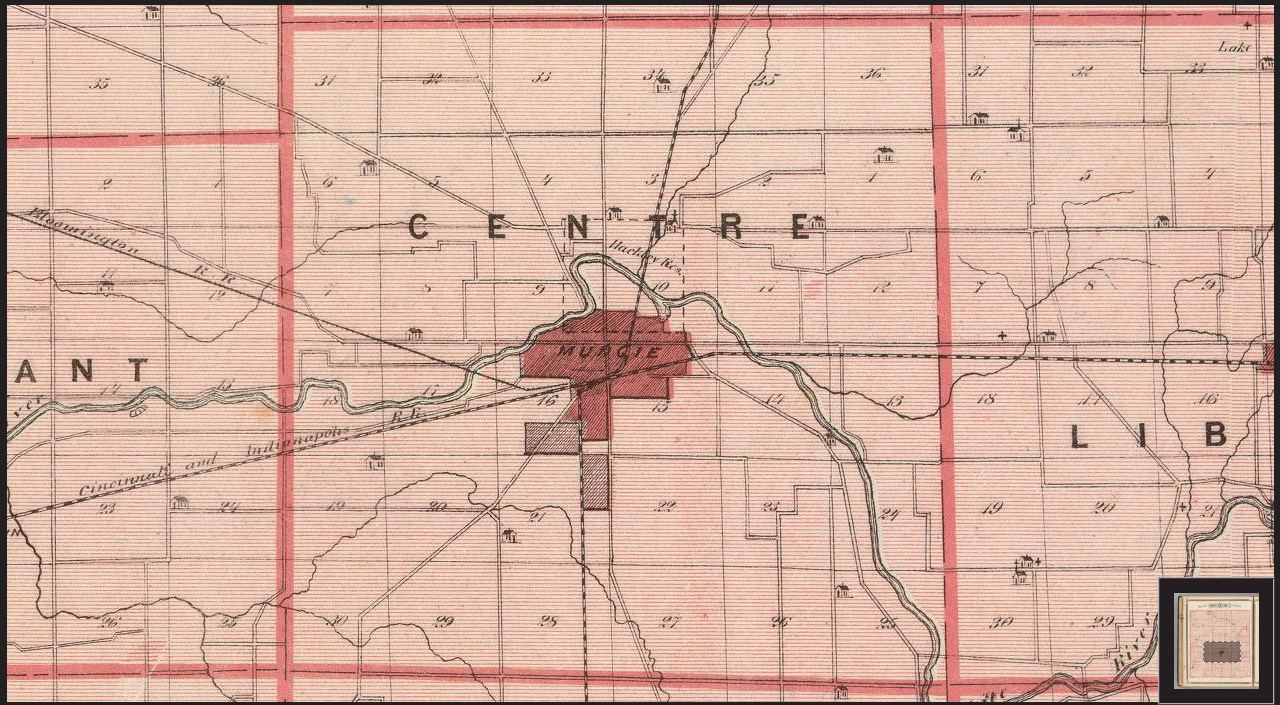 This is part of a Muncie Township map from 1876. At the top center is part of the Hackley Reserve, which intersects with present day Minnetrista. 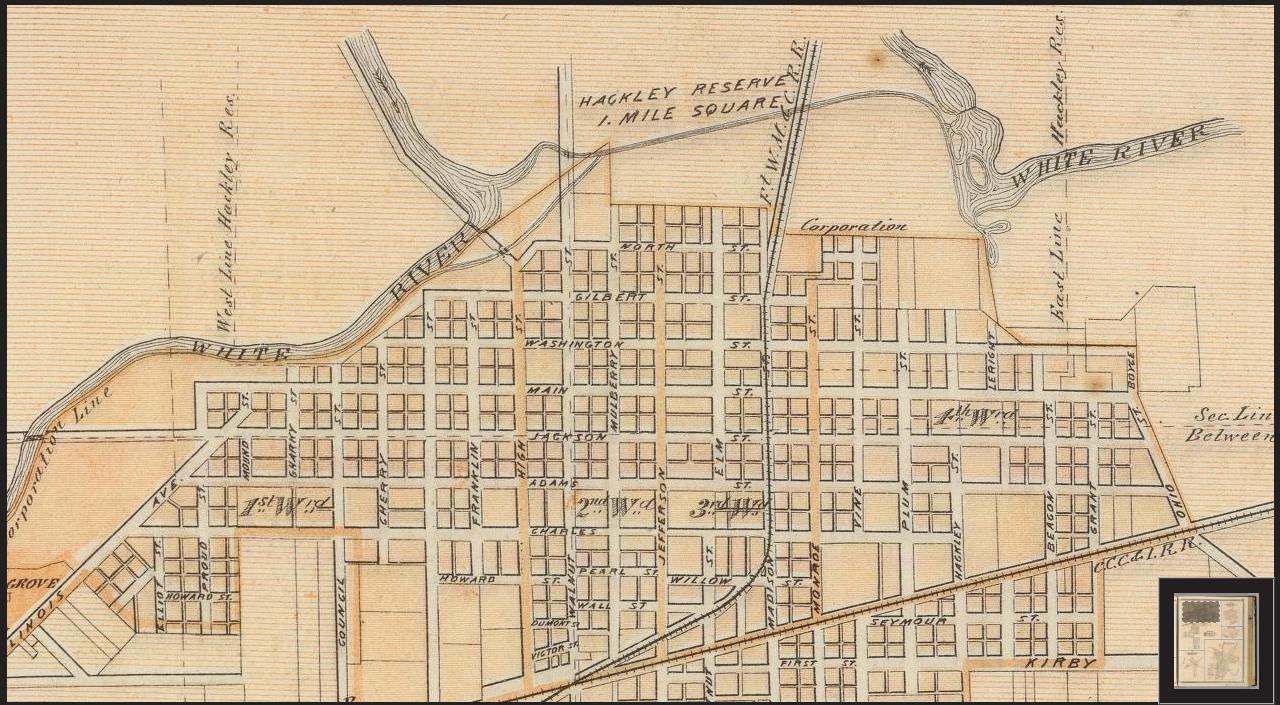 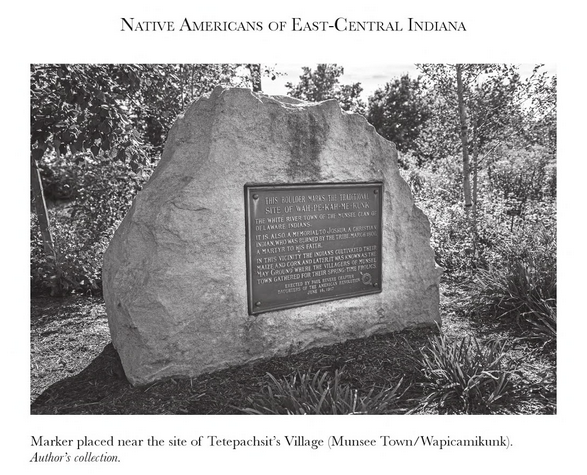 The plaque reads: “This boulder marks the traditional site of Wah-Pe-Kah-Me-Kunk. The White River town of the Munsee clan of Delaware Indians. It is also a memorial to Joshua. A Christian Indian who was burned by the tribe March 1806. A martyr to his faith. In this vicinity the Indians cultivated their maize and corn and later it was known as the "May Ground" where the villagers of Munsee town gathered for their spring-time frolics. Erected by Paul Revere Chapter Daughters of the American Revolution June 14, 1917.”1

This plaque sits on the grounds of Minnetrista which was once the Native American settlement of the Lenape tribe, who called it Wah-Pe-Kah-Me-Kunk, Tetepachsit's Town, and later, Munsee Town. The name “Minnetrista” comes from the Sioux Native American language (no relation to Indiana or the Lenape) with the words “minne,” meaning water, and “trista,” meaning crooked or twisted. This acknowledges the village because it is said to have been located on the north bend of the White River, where Minnetrista is located currently. The land that Minnetrista sits on was also once owned by the Ball family, founders of the Ball Brothers Glass Manufacturing Company, which has further ties to Muncie history. The Ball family chose the name "Minnetrista" for their land as it can also mean "a gathering place by the water." Today, Minnetrista and its grounds are open to the public as a cultural learning center.

History of the Lenape

The Lenape, meaning "the people," are a tribe of Native Americans that originally lived in the region that now includes the state of Delaware – along the coast of the Atlantic Ocean.2 The Lenape are split into many different smaller groups, such as the Munsee and the Unami. The Lenape are also referred to as the Delaware, which became common sometime during the 1700s. This term comes from Lord Thomas West de la Warr, who was appointed governor of the West Virginia territory in 1610. The Lenape in that area came to be known as De la Warr’s Indians, which was later shortened to the Delaware.2 The Lenape who lived in northern Delaware came to be called the Munsee, after the principal village there.2 Over time, the Lenape/Delaware migrated to east-central Indiana due to various conflicts and removal treaties with the Europeans and later, the U.S. government. The main body of Lenape settled along the west fork of the White River in 1796.3 Over the next several decades, many villages emerged, each with their own chief. Among the most powerful chiefs were Buckongahelas, Hockingpomsga, Tetepachsit, and Kikthawenund (William Anderson).4 When the Lenape left Indiana due to conflicts and the signing of the Treaty of St. Mary's, Kikthawenund became the most prominent chief, partly due to the fact that the other powerful chiefs had died.4 Most of the present day Lenape live in Oklahoma, where they are a federally recognized tribe.

Munsee Town was the principal town of the Munsee Lenape. Munsee Town has many names including: New Town, Tetepachsit’s Town, and Wapicamikunk, which has various spellings. Munsee Town was located along the White River, somewhere near Minnetrista Boulevard, in present-day Muncie, Indiana.5 Tetepachsit was the chief of Munsee Town, or Tetepachsit's Town, until his death in 1806. In 1818, the Delaware chiefs of the area signed the Treaty of St. Mary's, which gave ownership of the Munsee Town land to Rebecca Hackley, the granddaughter of the Miami chief Little Turtle.6 Goldsmith Gilbert, who is often mistaken as the founder of Muncie, was a white trader who purchased the Hackley Reserve from Rebecca Hackley in 1827 for $960.7 However, Goldsmith Gilbert did not to pay Rebecca Hackley for the 627 acres at the time he took possession of the land. It was not until March of 1835 (three months before her death), when, with the help of a lawyer, she was finally paid. This aspect of Muncie history is not widely known or acknowledged, but it lives on through current landmarks such as Minnetrista and the names of Hackley, Reserve, and Gilbert streets.

Tetepachsit and Joshua the "Martyrs"

Over the decades, the migration of white settlers had caused the depletion of game in the area as well as the spread of deadly disease, alcoholism, and armed conflicts. The loss of land, ongoing famine, and the threat of plague, were all factors leading up to the events of 1806.8 In 1805, the Shawnee Prophet Tenskwatawa began a revitalization movement to combat these issues.8 Tenskwatawa called for Native Americans to return to the old ways and give up alcohol. He also publicized a strong opposition to witchcraft.8 During this time, many young warriors stopped taking the advice of their elders, who were traditionally the main authority figures. The death of Buckongahelas, chief of nearby Buckongahelas Town, further weakened authority in the area.9 Additionally, a Delaware prophetess named Beata claimed that the old chief Buckongahelas had been killed through witchcraft.8 Because of these factors, the Shawnee Prophet Tenskwatawa came to a council of judgement, where witches would be identified and punished. In March of 1806, Tenskwatawa began rounding up suspected witches and executing them.10 Among these were Caritas, chief Tetepachsit, and the martyr Joshua (who is mentioned on the plaque).11
All three of these individuals were Christians considered to be sympathetic to the whites.10  Caritas, also known as Anne Charity, was an elderly Delaware who was very vocal in her opposition of Beata.10 This may have prompted her execution.
Chief Tetepachsit is thought to have been executed for similar reasons. Firstly, chief Tetepachsit was considered by many to be too friendly with the Moravians and whites in general. Secondly, the Prophet Tenskwatawa believed that all the old chiefs were leading their people to sell their lands and signing treaties with the U.S. government.12 On March 17, 1806, he was dragged 15 miles to the Moravian mission and tomahawked in the head by his son, who may have been angry with him for taking another wife.12 Tetepachsit's body was thrown into a fire that later spread to the surrounding forest and the Moravian's village.13
Joshua was a Mahican (Native American tribe) convert who acted as interpreter for the Moravians. He was a musician, translator, and skilled handy-man who the Moravians relied upon for his farming and carpentry skills.14 Two of his daughters had been killed in the Gnadenhütten Massacre in 1782 and he was often seen drinking whiskey.14 Joshua was known for his connections with the Moravians and drinking alcohol, two things The Prophet preached against. Joshua was burned as a witch in 1806, not long after Tetepachsit's execution.14
Though the witch hunt of 1806 is a largely forgotten aspect of Muncie history, it is important to remember. The deaths that occurred during this time were horrendous and can easily fit into the stereotype of the "savage Indian." However, it is important to note that the actions of the Native Americans involved were simply an attempt regain control of their lives. Though this does not justify their actions, we have to remember that atrocities were committed by Settler Colonials (i.e. Americans) as well. Instead of viewing this plaque as a representation of the "savage," long-gone "Indian," view it as a reminder that Native Americans have always shaped American history and as such, they cannot be ignored in the present.

If this is a topic that interests you, here are a few books you might enjoy:

Imprints: The Pokagon Band of Potawatomi Indians and the City of Chicago, by
John N. Low.

This entry has been edited 37 times.